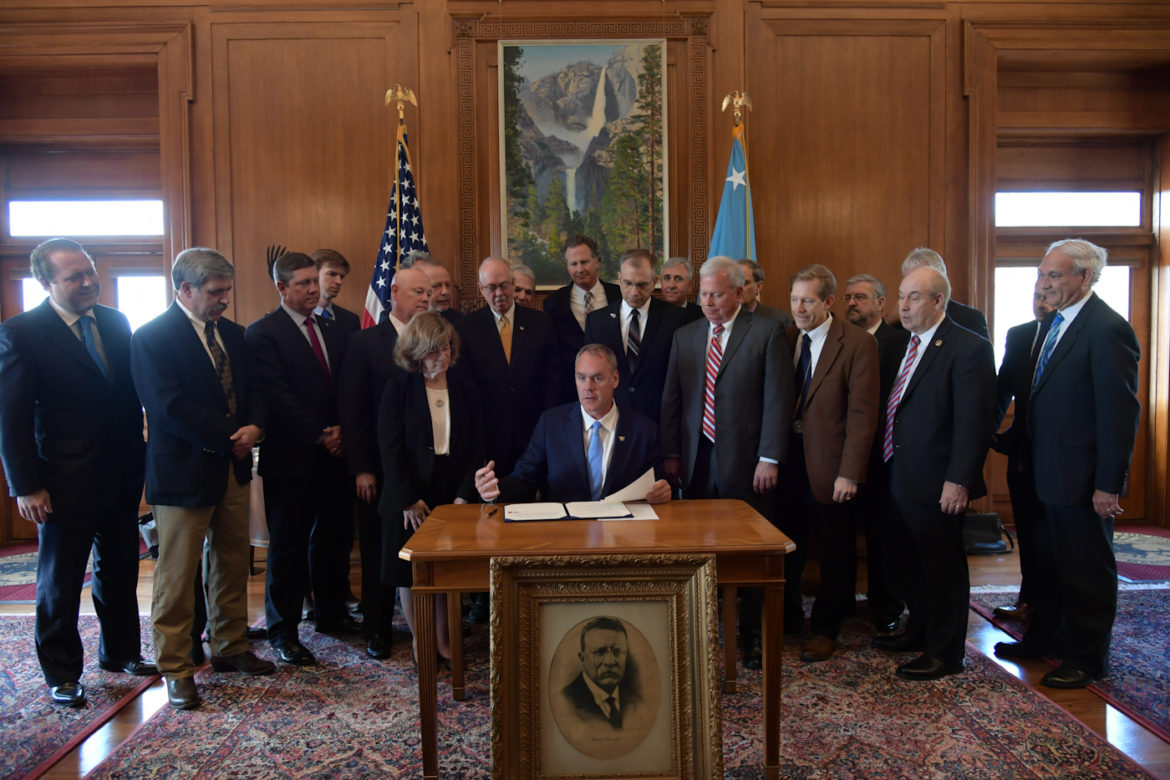 Interior Secretary Ryan Zinke on his first day of work, with a portrait of Theodore Roosevelt in front of his desk, and flanked by representatives from groups including the NRA, National Shooting Sports Foundation, Boone and Crockett Club and the Association of Fish and Wildlife Agencies

On Ryan Zinke’s first day as Secretary of the U.S. Department of the Interior, he overturned an 11th-hour Obama-era directive that would have expanded the use of nontoxic ammunition and fishing tackle on public lands.

Rep. Steve Pearce publicly thanked Zinke on Twitter for his “quick action to scrap a last-minute Obama Administration regulation that banned lead ammo.” The social media message included a shot of Zinke signing the order while flanked by clapping fans, including the National Rifle Association’s Chris Cox, and a picture of lead ammunition.

NM Political Report followed up with the Republican representative’s office, asking why the congressman supported the use of lead, a metal known to harm humans and wildlife, on public lands.

After Interior Secretary Ryan Zinke overturned a directive for the use of nontoxic ammunition and fishing tackle, Rep. Steve Pearce thanked him.

Christensen said that as a sportsman, Pearce opposed the Obama-era order from the start and had called for its repeal. She also said it represented  a “midnight effort” to limit hunting and fishing on federal lands.

But a closer look—at bans on lead, the metal itself and the hunting community in New Mexico—tells a somewhat different story.

By overturning the directive to use nontoxic ammunition and fishing gear, Zinke was “throwing red meat” to a particular constituency, said Bryan Bird, southwest program director for Defenders of Wildlife.

But Bird also said that in New Mexico, conservationists and sportsmen are less divided on environmental issues than in other parts of the country. “We do disagree on things,” he said. “But we do it respectfully.”

“Zinke’s message was: sportsmen are [the administration’s] priority. There’s a strong sense in that administration that the environmental community is radical and out to get jobs,” said VeneKlasen, who estimates more than half his group’s members are Republicans. “But we’re all there because we love the land and the wildlife—and I don’t like the exclusivity of it all.”

Those who engage in shooting sports—aiming at targets, rather than waterfowl or big game—might prefer lead ammunition because it’s cheaper, especially when people are tearing through multiple boxes of ammunition. But, he said, sportsmen have been transitioning away from lead for decades

“The trend has been toward non-toxic ammunition in high caliber rifles, and I shoot all-copper bullets in my guns, which perform as well or better [than lead bullets,]” he said. “I don’t want to shoot anything and then feed it to my family with lead in it. Why would we use something that’s toxic?”

Bird also pointed out that if Zinke is going to continue calling himself a “Teddy Roosevelt Republican,” he’s going to have to do better. “He has a tough job ahead of him,” said Bird.

Not only that, VeneKlasen said, but another ban on lead has already been in place for decades.

Getting the lead out

In the 1980s, the U.S. Fish and Wildlife Service surveyed the impacts of lead on a number of wild species, including ducks, across the country. The federal government has also studied the effects of lead on scavenging birds such as California condors and bald eagles. One study of more than 4,000 carcasses of bald and golden eagles collected in 38 states over the course of decades found that lead accounted for the greatest percentage of poisonings.

The Jan. 19 directive from Fish and Wildlife Service Director Dan Ashe would have set a schedule for expanding the use of nontoxic ammunition and fishing tackle on lands overseen by the agency. According to that directive, the Fish and Wildlife Service “recognized the problem of avian exposure to lead shot used for waterfowl hunting and enacted restrictions in 1991 and hunting and waterfowl populations have thrived since.”

More than a quarter-century ago, in 1991, the federal government banned lead shot for waterfowl hunting across the country. Hunters had to start using ammunition made from metals like tungsten, iron, tin or nickel. This was so ducks and other species that pick up the scattered shot, which settles at the bottom of lakes and wetlands, wouldn’t be poisoned.

About 10 years after the ban, scientists released a study about tests on thousands of ducks harvested by hunters in the Mississippi Flyway, an important migration route along the Mississippi River and tributaries. They estimated that the ban on lead shot reduced poisoning deaths of mallards by 64 percent and that overall ingestion of toxic pellets declined by 78 percent. According to the researchers, the ban prevented the deaths of about 1.4 million ducks by lead poisoning in 1997 alone.

But lead was still a problem when it came to big game hunting. Scavengers would eat meat contaminated with lead, or find discarded lead bullets.

After learning that lead poisoning was the leading cause of death in Arizona for rare California condors, beginning in 2005 the state’s Game and Fish Department started providing free non-lead ammunition to those hunting in areas frequented by condors. According to the department, the vast majority of hunters started voluntarily using non-lead ammo or removing “gut piles” from the field rather than leaving them behind, where condors and other wildlife might scavenge contaminated meat.

And few hunters had complaints about non-lead bullets.

That doesn’t apply to everyone, of course. There are “old timers” who prefer using lead bullets, one hunter told NM Political Report. He explained that bullets with lead soft points expand—or “mushroom”—on impact, sending a shockwave through the animal that kills it more quickly.

According to the announcement from Zinke’s office, the two orders he signed on his first day as Interior Secretary expanded public lands access. The pair of secretarial orders—the lead order and another about increasing hunting and fishing opportunities on federal lands, including National Parks—would also “make sure the community’s voice is heard.”

According to Zinke’s new order, Ashe’s January directive to limit the use of toxic ammunition and fishing tackle on public lands had been issued without input from stakeholders.

Ashe’s directive, signed the day before Donald Trump was inaugurated as president, no longer appears on the Fish and Wildlife Service website and has been removed from an archive of the director’s orders. NM Political Report downloaded a copy of the rescinded order found on the Internet Archive.

Most sinkers are still made from lead, but there are also some on the market made from tungsten, brass and glass

New Mexico sportsman Joel Gay said that the Obama administration shouldn’t have pushed that order through at the very last minute. “He should have done it the first day of his eight years in office, instead of on the last day,” he said. “Then the regulation would have withstood the challenge.”

While some hunters may still harbor ill-will about the 1991 ban, Gay doubts most are that resistant to change. And many hunters have already started to transition away from the use of lead.

“Most hunters appreciate science, they understand science and they understand that the lead ends up at the bottom of the food chain, where diving ducks are going to pick it up,” he said. And it’s the same with using lead ammunition for big game hunting, where lead particles can end up in the muscle and tissue left behind from a carcass.

As for the cost, it’s a negligible one for hunters, who really only need one bullet per hunt, said Gay.

“When you think about the cost of an elk hunt”—things like gasoline, equipment, food—spending a few bucks more on non-lead ammunition isn’t a big deal, he said.

At an Albuquerque sporting goods store, non-lead ammunition recommended for an elk hunt is more expensive, though not significantly so. A box of 20 lead bullets cost $32.99, and those made from copper were $43.99 for a box of 20. And for anyone ready to forsake lead fishing gear, there are sinkers made from tungsten, brass and glass.

Meanwhile, not all members of New Mexico’s congressional delegation had praise for overturning the lead ban.

“I was disappointed that Secretary Zinke moved so quickly to change the Fish and Wildlife policy. When we met before his confirmation, he spoke about wanting to make decisions based on consensus and only after hearing from all sides,” Sen. Tom Udall told NM Political Report in a statement. “I continue to encourage him to pursue a thoughtful policy-making process and engage in a conversation with important stakeholders from different perspectives.”

Both of New Mexico’s senators voted in favor of Zinke’s confirmation.

NM Political Report solicited comment from Sen. Martin Heinrich, who is a sportsman, but did not receive a response.