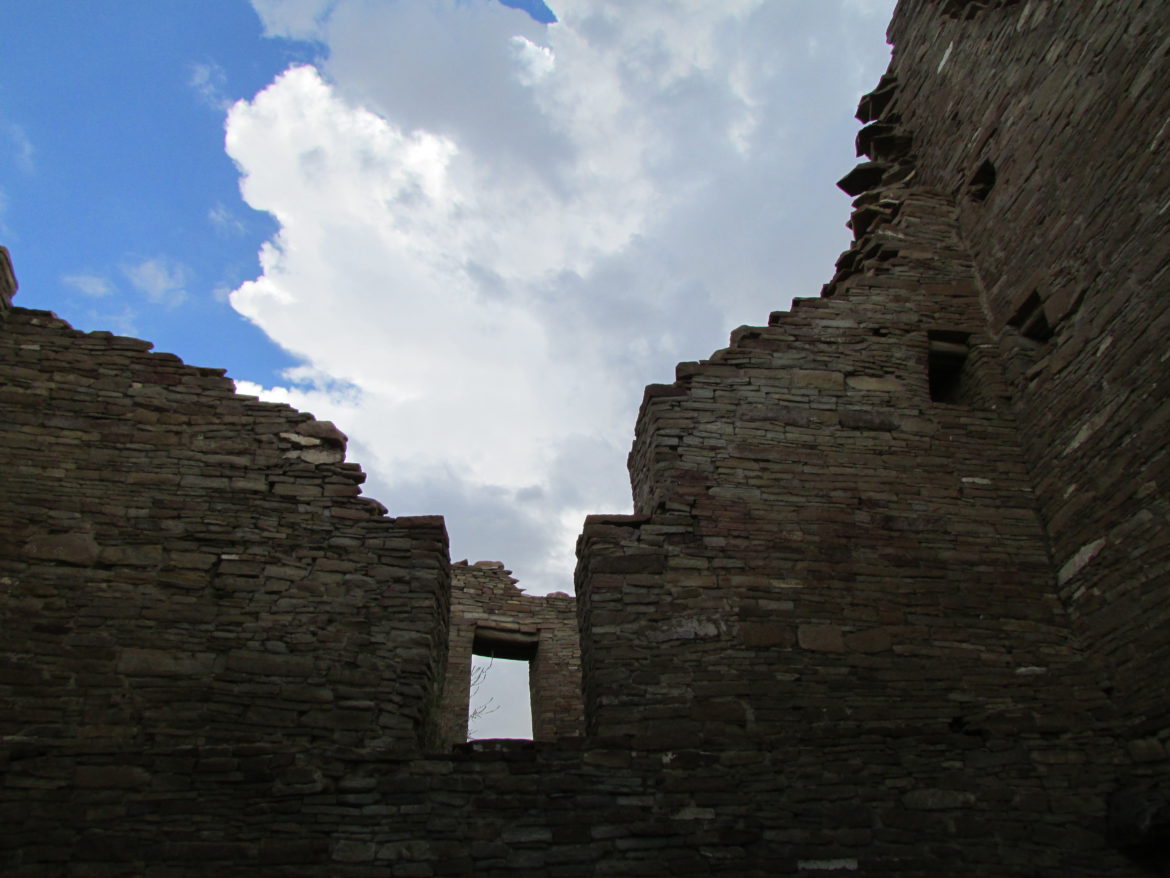 Saturday night, freshman state Rep. Derrick Lente watched one of his first initiatives turn into a showdown on the House floor.

Earlier in the session, Lente’s memorial to protect cultural and historical sites near Chaco Canyon received bipartisan support and passed through the House State Government, Indian and Veterans’ Affairs Committee unanimously. Something changed, though.

By the time it reached the House floor, the Democrat’s memorial had triggered uncertainty and skepticism from Republicans.

That’s because there was an elephant lurking in the room, said Lente, who is from the Pueblo of Sandia.

“It’s the f-word,” he said in an interview afterward. “Fracking.”

Hydraulic fracturing, or fracking, has been common in New Mexico for decades. That’s when drillers pump a mixture of water, sand and chemicals into a well formation to open up small fissures to release oil or natural gas from rock formations.

Republicans opposed the memorial, which passed 31-28 on a party-line vote.

Citing the historical, cultural and economic importance of the hundreds of sacred and archaeological sites in northwestern New Mexico, the memorial encouraged the U.S. Bureau of Land Management and the Bureau of Indian Affairs to halt new leases and drilling permits until there has been sufficient tribal consultation and a new resource management plan has been completed.

Beyond the boundaries of Chaco Culture National Historic Park, where sandstone villages, kivas and Great Houses are preserved, hundreds more sites radiate out across the landscape. Drilling opponents say the current plan, written in 2003, is out of date and does not consider the cumulative impacts that hundreds of new shale oil wells will have on the sites or the landscape and its communities.

BLM spokesman Zachary Stone, who works out of the Farmington field office, said the agency has already enacted a leasing moratorium in a 10-mile radius around the national park until the plan has been completed. The agency will release its public scoping report this spring, and the draft Environmental Impact Statement is expected to come out next summer.

Stone also said that for BLM tribal meetings and government-to-government consultation “continues to be an ongoing process to help inform us on how to manage all of our resources.”

Meanwhile, Wally Drangmeister, director of communications for the New Mexico Oil and Gas Association pointed out that existing wells near the park have also been sited so they’re generally not visible from the roads and trails inside the park. “The overwhelming majority of recent development, the drilling of new wells, has been 15 miles and beyond the borders of the park,” he said.

In an earlier memorial, Lente and Rep. Patricia Roybal Caballero, D-Bernalillo, had requested that the BLM consider a temporary moratorium on all “fracking-related” leases and permits in the Greater Chaco area until the agency completed its plan. The House Energy, Environment and Natural Resources Committee tabled that memorial.

The new memorial, Lente said, “didn’t take such a deep stab.” Instead, he said, he wanted to encourage the BLM to follow the federal laws requiring consultation with tribes and to truly investigate what impacts the oil and gas industry is having in the area.

Counselor, NM, is on the eastern edge of the Navajo Nation

When planning projects like dams, pipelines and land transfers, federal agencies must engage tribes in government-to-government consultation. This is required even when projects aren’t planned for reservation lands, and has to do with the sovereign status of tribal governments. It’s also an acknowledgement that tribes once occupied and still have cultural ties to those places even after being forced off these lands.

“This was not about disenfranchising an industry or trying to impact New Mexico’s dwindling financial status,” Lente said of the memorial. “It truly is an outreach, to try and bring people together.”

Lente said that when he was campaigning in the district last year, some Navajo people living near the development along Highway 550 said they felt like they didn’t have a voice. People living near the new wells—many of which are clearly visible from the highway—don’t know what’s happening underground or to the air around them, he said. And when people don’t have all the data, or feel like no one is listening to them, they start speculating about what could happen.

Tensions are growing, Lente said, between people in the communities who support oil and gas and those who oppose it. Local people’s feelings are far from uniform when it comes to the drilling.

“It’s causing a lot of in-fighting,” he said.

That’s why he and others would like development halted until the agency knows exactly how drilling is impacting communities, landscapes, water and the environment. Once there is concrete data, he said, there can be discussions around the table involving everyone. In the end, he said, those studies could show that what tribes feared is actually safe or confirm that drilling is causing serious problems.

But at least everyone would know and be able to move forward from there.

Widespread natural gas drilling started in the San Juan Basin in the 1940s and today, the landscape is dotted with tens of thousands of wells, most of which have been hydraulically fractured. In the 1980s, companies also started drilling into coal seams to remove the natural gas trapped there.

By 2008, thanks to new and more efficient ways of getting at natural gas, wells in the San Juan Basin were churning out more of the product than any other region in the United States. Two years later, though, the market was glutted. Production was so high that prices plummeted and industry started hemorrhaging jobs. In 2010, 5,000 jobs disappeared from the San Juan Basin.

In recent years, new technology has allowed companies to extract higher-value oil trapped within tight shale formations. And that’s what’s drawing so much attention in the San Juan Basin, where more than 100 new oil wells have been drilled in the past few years. The Farmington Field Office has approved 50 applications for permit to drill since last October, according to the BLM’s Stone. The agency has also received another 24 applications that haven’t been approved yet.

Taken in February, this aerial photo shows two new wells, one being drilled and the other being hydraulically fractured, along County Road 7900. That road leads to Chaco Culture National Historic Park. Highway 550 is the paved road at the top right.

Navajo activist Daniel Tso has been paying close attention to the development. This year, he’s noticed new wells off Highway 550 along the road to Chaco Culture National Historic Park and continued drilling across the highway from Lybrook Elementary School. He’s also watched operators bring in dozens of temporary storage tanks to a XPX Energy oil production site near Nageezi where last summer 36 of tanks ignited in a fireball.

The explosion aside, WPX had a good year last year, reporting record oil output in the fourth quarter of 2016. According to its year-end report, the company also plans to invest $150-170 million in the San Juan Basin this year, to compete an estimated 40-46 wells. Most of the company’s 2017 drilling plan is focused on the West Lybrook area, where it already has eight pads “built and rig-ready.” This month, the New Mexico Senate confirmed retired WPX Vice President for San Juan Basin Operations Ken McQueen as secretary of the state’s Energy, Minerals and Natural Resources Department.

“The fact is that after these facilities are put in, there is rancid, foul-smelling air,” said Tso, who has also served on the Navajo Tribal Council as a representative for Torreon Chapter.

He described how first the rig comes in to drill the well. “There’s the constant noise of the drill, which can last seven days to two weeks, when you might as well be at the Sunport, listening to jet engines.”

Once a well has been drilled, trucks haul in materials like cement and steel pipe, and then water, sand and the chemical mixtures for fracking. “Then, once the fracking operation is completed, then they have to truck out the produced water, and truck out the oil,” he said.

All that traffic ruins the gravel and two-track roads that wind between communities on and near the eastern Navajo Nation. These are roads that buses use to take students to school, said Tso.

The four-wheel drive pickups and semi-trucks grind deep ruts into the roads, he said—sometimes 12-24 inches deep. Then, after they’ve been graded to smooth out the ruts, Tso said the roads end up two to three feet lower than the surrounding land and collect water, which further erodes them. “You might as well have an irrigation ditch, but who’s going to take ownership? Who’s going to install culverts, or elevate the roads so water doesn’t puddle up in the middle?” Tso said.

Tso said he’s grateful to Lente, who he said was “true to his word” in standing up for the people living in places like Lybrook, Counselor, Nageezi and Ojo Encino. Next, Tso would like to see the state’s congressional delegation take more of an interest in the area—to help find resources to fix the roads and encourage BLM and BIA to take their Indian Trust responsibilities seriously.

He would also like to see baseline studies of the water, soil and air performed in places where development isn’t yet occurring. That way people can know exactly how development, as it moves forward, affects people and the environment.

Tso said that people sometimes look around and ask where exactly the “Greater Chaco Landscape” is or how people came up with the name. “It’s not a point on a map. It’s not designated by longitude and latitude,” he said. “The whole landscape is sacred.”

In February, the Navajo Nation also asked the BLM to enact a moratorium on multi-stage fracking, horizontal drilling, lease sales and permit approvals until the plan was completed and the Environmental Impact Statement finalized.

In their letter to the federal agency, Navajo Nation President Russell Begaye and Vice President Jonathan Nez said they were concerned that drilling activities were “interrupting the daily lives of Navajo people who live in the Navajo Nation Chapters such as Counselor, Nageezi, Torreon and Ojo Encino.”

Just a couple of weeks later, the two Navajo officials met with the All Pueblo Council of Governors. In a historic meeting that brought together the Navajo Nation and 19 New Mexico pueblos, the tribal governments called for protection of the areas around Chaco. They also created a working group to address the issues.

Longtime energy activist Mike Eisenfeld pointed out that laws such as the National Environmental Policy Act and the National Historic Preservation Act require tribal consultation. But he questions how meaningful consultation is when agencies carry out the projects exactly as planned, despite input from tribal governments. “What does it mean in consultation when people say ‘no’ to a project, or they say, ‘we want a moratorium until there’s a plan’?” said Eisenfeld, who lives in Farmington and works for San Juan Citizens Alliance. “What does consultation mean? Is it a bureaucratic formality? I don’t think that it is, and we should be more careful about people.”

As for Lente, he said that New Mexico needs to be proactive. “There’s the example of North Dakota and the Dakota Access Pipeline, and that’s an unfortunate situation we want to avoid,” said Lente. “The federal government, in my opinion, did not uphold their end of the bargain and support the tribal governments.”

He wants to make sure that doesn’t happen in New Mexico.

“If we can slow it down, look at the data, have all the parties come to the table, see what is going on, and make a positive decision for everybody—then we’re in a better position than just pushing forward,” he said.