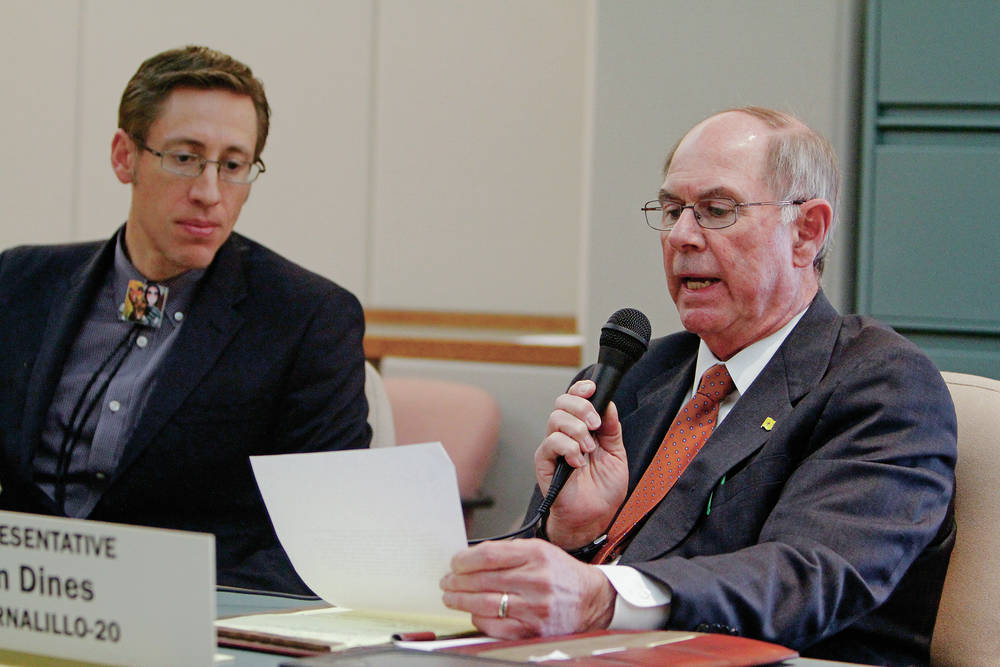 Rep. Jim Dines, R-Albuquerque, addresses a joint House and Senate conference committee that was trying to reach an agreement Friday on a proposed constitutional amendment to establish an independent state ethics commission.

Voters in next year’s general election will get to decide on a proposed constitutional amendment to establish a state ethics commission.

The measure could lead to creation of a commission to investigate possible public corruption cases and campaign finance violations.

Both the House and the Senate on Friday night approved a compromise resolution. That followed the action of a special committee consisting of three senators and three state representatives who reconciled two versions of House Joint Resolution 8.

A resolution that unanimously passed the House last week spelled out many details of how the ethics panel would operate. These included qualifications of commission members, how they would be appointed and how complaints would be handled.

But the Senate Rules Committee later adopted an amendment by its chairwoman, Sen. Linda Lopez, D-Albuquerque, that removed many of the specifics. Lopez and other senators said they believed the resolution should be more concise so it doesn’t lard the constitution with details or necessitate another constitutional amendment to make changes in how the commission operates.

Lopez and others said most of the details should be put into a state statute by the Legislature in 2019 if voters approve the constitutional amendment next year.

Rep. Jim Dines, R-Albuquerque, and other sponsors of the resolution initially didn’t protest Lopez’s amendment. But when the measure returned to the House for agreement with the Senate’s changes, Dines recommended the House not go along. The House and Senate then appointed committees to try to reach a consensus.

The resolution the Senate approved Friday calls for creation of a seven-member commission that would investigate and adjudicate possible ethical violations by state legislators, executive branch officials, lobbyists, candidates for state offices and state government contractors. The commission would have subpoena power.

The conference committee on Friday restored a section that spells out how ethics commission members would be appointed.

Dines noted that the constitutional amendment creating the state Judicial Standards Commission also contains details on how those commissioners are chosen.

The four commissioners appointed by the Legislature would then select two more members. They couldn’t be from the same political party.

Lopez, a member of the conference committee, said she didn’t believe that adding the section on the selection process would be too much detail in the constitution.

A lack of specifics in the proposed constitutional amendment was the basis for much of the criticism it received during a Senate floor debate.

Dines said it is important that the enabling legislation contain a section on transparency and how the commission handles public information. That was part of the material removed by the Senate amendment.

The original resolution said the commission would have the power to dismiss complaints deemed frivolous, but the body would have to make public complaints that have been dismissed without a hearing and the reason for that dismissal.

During the floor debate, some senators objected to the release of information about frivolous complaints.