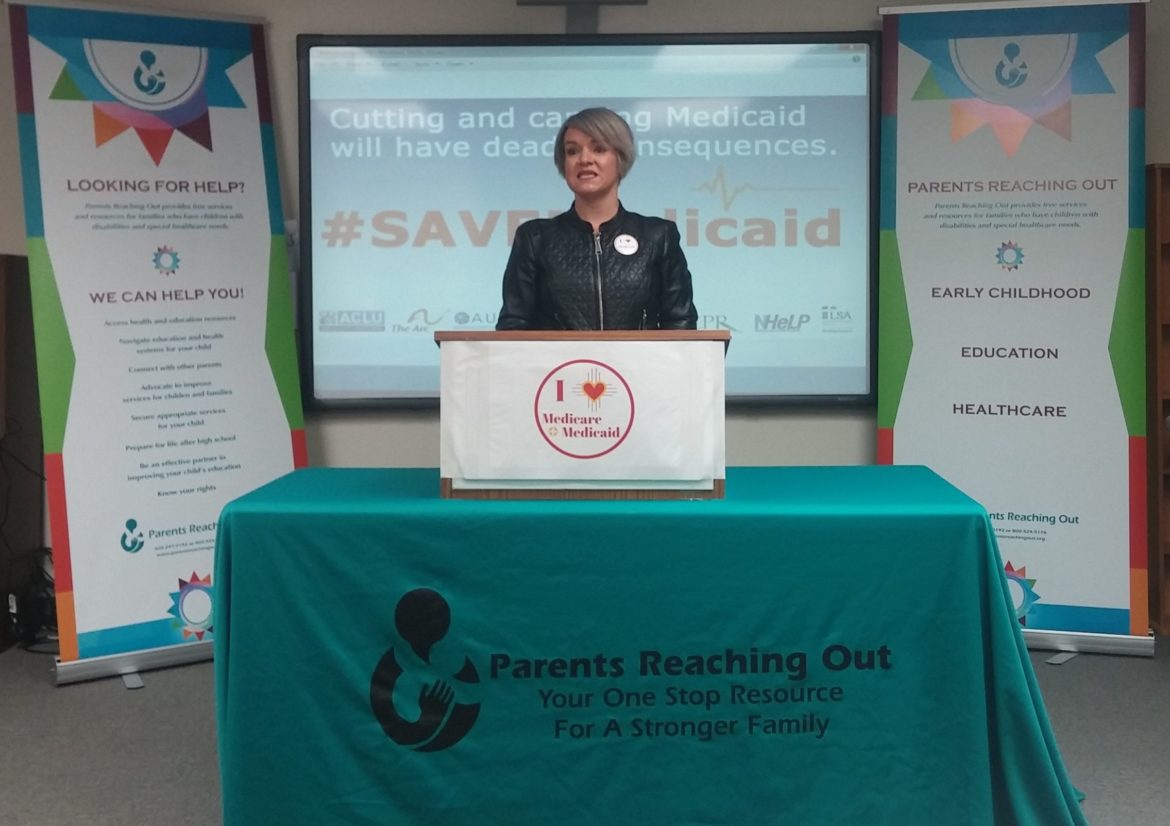 A coalition of healthcare advocacy and poverty rights organizations wants Congress to dump the Republican-backed replacement for the federal Affordable Care Act.

On Wednesday, Parents Reaching Out held a press conference in Albuquerque encouraging people to call their representatives and senators to urge them to oppose the American Health Care Act (AHCA), which the federal House of Representatives may vote on as early as this Thursday.

“We are concerned about upcoming Medicaid cuts and the potential devastation to our community,” said Lisa Rossignol, the healthcare liaison at Parents Reaching Out, which organized the Wednesday press conference.

The bill, backed by President Donald Trump and House Speaker Paul Ryan, R-Wisconsin, would end the Medicaid expansion under the ACA by 2020. It would also cut money to Medicaid, the federal healthcare program for the poor, by $370 billion over 10 years, according to the Center on Budget and Policy Priorities.

Along with this, if the AHCA goes into law, 24 million Americans are expected to lose health care coverage by 2024, including 17 million fewer by 2018. Many of these would be because of the Medicaid cuts. That’s also fewer uninsured Americans than what would result from a straight repeal of the ACA, also known as Obamacare.

New Mexico Center on Law and Poverty staff attorney Abuko Estrada said the end of the expansion would “jeopardize the health care of over 265,000 adults that gained health care in the expansion.”

“It would dismantle a program that’s been working well for over 50 years and a program that now serves over 900,000 New Mexicans,” he said.

Adam Shand, a Medicaid recipient under the state’s Developmental Disabilities waiver, said the Medicaid cuts under the AHCA would jeopardize his ability to afford prescribed medicine to prevent seizures. Shand, who has cerebral palsy, said his seizure medication would cost him between $350-$450 per month without Medicaid coverage. Without the medication, he said he wouldn’t be able to work or advocate in the public.

“If these cuts were to go into effect, it would be very critical for me,” Shand said. “My life would change dramatically, because I wouldn’t be able to access these things or be in the community.”

Joan Curtiss, a senior advocate as Disability Rights New Mexico, spoke of recently getting her son, who she said has “serious mental issues,” onto a Medicaid waiver program that allows him to receive care from home.

“Now he’s living in his own studio apartment where he has people come and help him go to the grocery store, help him get blood draws, help him go to the doctor,” she said emotionally. “It’s been a complete change for our lives, and he’s been able to live with our family.”

Rossignol said that her organization is pressing people to call their member of Congress and express their disapproval of the AHCA through e-blasts and phone banking. She added that this activism was happening nationwide on Wednesday.

Rossignol also noted that all of New Mexico’s congressional delegation besides Rep. Steve Pearce, a Republican representing the state’s southern area, have expressed opposition to the Obamacare repeal. Pearce, for his part, hasn’t committed one way or the other on AHCA and has expressed some concerns about it.

It isn’t clear if Republicans have enough votes to pass the bill through the House of Representatives, let alone the Senate.

She said Parents Reaching Out is working particularly to get Pearce’s constituents to call his office about opposing AHCA.

“It’s time to be scared,” Rossignol said. “This is an alert that there will be deadly consequences. That is not melodramatic to say.”