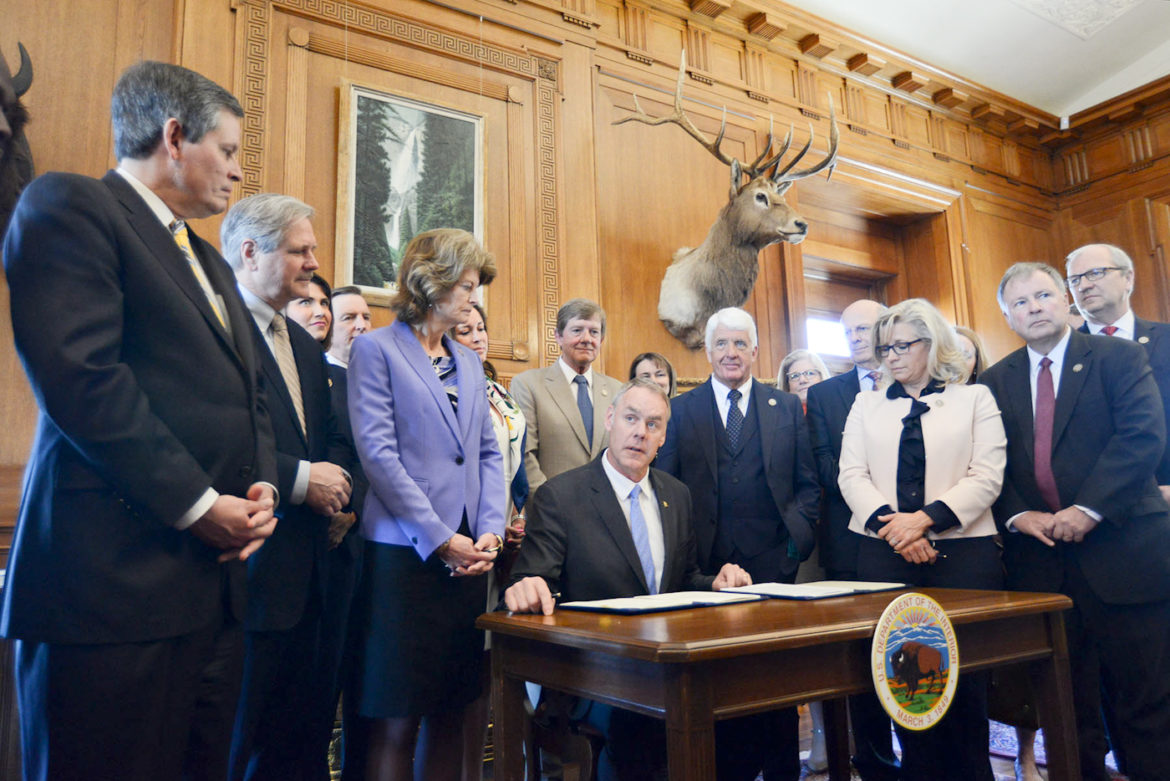 He also ordered the U.S. Environmental Protection Agency to review and revoke the Clean Power Plan, which would have required states to cut greenhouse gas emissions from power plants. Last year, the U.S. Supreme Court stayed implementation of that plan, pending the outcome of a lawsuit against the EPA by utilities, the coal industry and 24 states. New Mexico, through Attorney General Hector Balderas, was one of 25 states, cities and counties to file a motion to intervene in support of the plan.

On Wednesday, Zinke followed up with more orders. One overturned a moratorium on new coal leases on federal lands, another directs an agency-wide review of all existing regulations, documents and policies that might hinder energy development and the third creates a new committee to advise Zinke on royalties collected from mining and drilling on public lands and in U.S. waters.

“From my perspective, it’s a wishlist from industry and climate denial groups, a hodgepodge of everything under the sun and sets in motion the scrubbing of all policies, reports and rules dealing with climate change in terms of reducing climate pollution and in terms of building resilience to climate change impacts,” said Erik Schlenker-Goodrich, executive director of the Western Environmental Law Center. “All the work that federal agencies have been doing the last several years is now on the chopping block.”

With companies already announcing the shutdown of coal-fired power plants in the Four Corners area, because natural gas is cheaper than coal, New Mexico was already on-track to cut carbon emissions from power plants, he said. That trend will continue, regardless of the Trump administration’s rollback of the Clean Power Plan. The orders from Trump and Zinke will likely spur more intensive oil and gas drilling in New Mexico, he said, including in southeastern New Mexico and in the San Juan Basin near the Greater Chacoan Landscape.

Schlenker-Goodrich said it would be troubling if federal employees feel pressured to work against the grain of evidence pointing to the impacts of climate change on New Mexico’s water supplies, forests and communities.

“I don’t think we’re going to go back to the point we were at 20 years ago—that climate change is way off in the future and we don’t need to worry about it—but we’re not going to see progress,” he said. “That’s what makes me worried right now: that we won’t see accelerated action, and instead will be dead in the water on climate action.”

Schlenker-Goodrich does think this week was historic, but perhaps not in the way Trump intended. The rollback of laws that keep water and air clean and communities safe may end up being a “lot of impotent bluster” on the part of the president—and something that invites backlash.

“In say, four or five years people may look back on this as a spark for more aggressive climate action because it demonstrates how radical the current ideology is in the Republican Party regarding climate change,” he said. “It may spark near-term action by state and local governments, though that will take some time, especially in New Mexico.”

On Wednesday, Zinke held a media call to talk about his three new orders. The former congressman from Montana made friendly conversation with some reporters—and fielded questions from small western media outlets like The Missoulian, Navajo Times and the Grand Junction Sentinel. Zinke said that as a secretary from a western state, he was “proudly enthusiastic of the decisive action the president took on energy independence.”

Reliable, affordable and abundant energy, Zinke said, is the key to manufacturing jobs. He also said that for some small communities, coal and other natural resources provided the only jobs.

“In my home state of Montana, the great Crow Nation is one of those areas,” he said, adding that the tribe’s chairman, Darrin Old Coyote, has said that a “war on coal is a war on the Crow people.”

Zinke also said it was more environmentally sound to “produce energy domestically and export it with reasonable regulation” than for mining and drilling to occur in places like the Middle East or Africa. He said energy independence—including the export of liquified natural gas—is also good for national security. It’s an economic counter to Russian aggression, he said, and to Iran.

Zinke also said the government isn’t in the “business of picking and choosing winners,” when it comes to energy sources. And he said that he recognizes that “tribes are not monolithic.”

“The Navajo, the Crow and a lot of the other tribes are a lot more energy-centric than the other tribes,” he said. “Within BIA, we’re looking at how to organize the tribes that have energy assets and what we can do specifically to allow the tribes more sovereignty and less regulations, so the tribes can make their own choice on a lot of these decisions that have otherwise been encumbered by layers and layers of bureaucracy.”

Despite the jobs that coal mines and coal-fired power plants have brought to the Four Corners area in New Mexico and Arizona, the legacy of coal hasn’t always been a good one for the Navajo Nation nor the Hopi Tribe.

In the 1970s, when the Peabody Mining Company wanted to expand its coal mining operations, the federal government relocated hundreds of Navajo and Hopi families. “That was legalized theft,” said Lori Goodman, executive director of Diné CARE, or Diné Citizens Against Ruining our Environment. “Coal has been nothing but devastation, demoralization and displacement, and it has put people in poverty.”

The profits that mining and power companies accumulated hasn’t trickled down to the Navajo people, she said. Instead, Navajo people living in the region suffer health problems like asthma and “black lung” disease. Many don’t have running water or access to electricity.

“Coal has been terrible for the Navajo people,” she said. “People can’t support themselves financially, and when their land has been destroyed they don’t have grass to feed their animals. It’s really destroyed the economic and social base for Native people, Navajo people.”

It’s bad enough, Goodman said, that the Trump administration is disavowing science and diminishing regulations that protect clean air and water. But by promising that coal jobs are coming back and that their policies will help rural and tribal communities, Trump, Zinke and others, including tribal leadership at the Navajo Nation, are doing a disservice to people who are already demoralized, Goodman said.

The Navajo Nation plans to ask the Trump administration for subsidies to keep the Kayenta Mine and Navajo Generating Station, both in Arizona, open until 2030. Currently, the Salt River Project and the plant’s other owners plan to close it by 2019. Recently, PNM also announced it plans to close the San Juan Generating Station near Farmington, perhaps as early as 2022.

“There are no coal jobs. Coal has been a dying industry,” she said. “And that is not based on regulations, that is based on the economics of coal: coal is not economically feasible anymore.”

The jobs won’t automatically disappear when the coal mines and plants close, she said. There will be decommissioning and reclamation jobs. And, she said, the two power plants already have transmission lines that could be transferred to the tribe to carry electricity from solar farms. “They could be thinking, ‘Oh my God, for the last 50 years, we’ve gotten cheap coal, cheap energy, and meanwhile been polluting a whole nation to death, wreaking their water. Let’s transfer the transmission access, give that to the people that have served us,’” she said.

The mines and power plants have also used tens of thousands of acre feet of water each year, for example. “Water is what makes a community grow,” said Goodman. She says those water rights should be returned to the Navajo people.

Instead of “giving false hope to the workers,” the federal and tribal governments should be planning for what happens after the closures, she said. “We all know coal is dead.”

Republican Rep. Steve Pearce praised Trump’s executive order and also attended Zinke’s signing ceremony. Afterwards, his office released a saying the rules Zinke overturned had “killed jobs in New Mexico and stripped states of their rights to determine what is best for their land.”

Meanwhile, both of New Mexico’s senators signed a letter to Trump asking him to rescind his Energy Independence Executive Order. The ten Democratic senators, from six western states, said that low natural gas prices—not regulations—are responsible for a market shift away from coal.

“To address this issue, we are eager to work across the aisle to support coal communities to revitalize their local economies, and create new and diverse job opportunities,” they wrote. “But this Executive Order does not address the core issue of creating jobs.”

The senators also said the order doesn’t acknowledge job growth in the clean energy industry, including in rural areas where 99 percent of the nation’s wind turbines are located. Nor does it address economic impacts of extreme weather events on rural communities, competition for water as temperatures continue rising, the impacts of reduced snowpack on the recreation industry and the harms caused by wildfires.

In their letter, the senators point to a 2016 Office of Management and Budget report that estimated annual taxpayer expenditures due to the impacts of climate change—like rising crop insurance premiums, wildfire costs and illnesses due to poor air quality—could hit $112 billion by the end of the century. The total fiscal impact of climate risks could make up 15 percent of the nation’s discretionary spending.