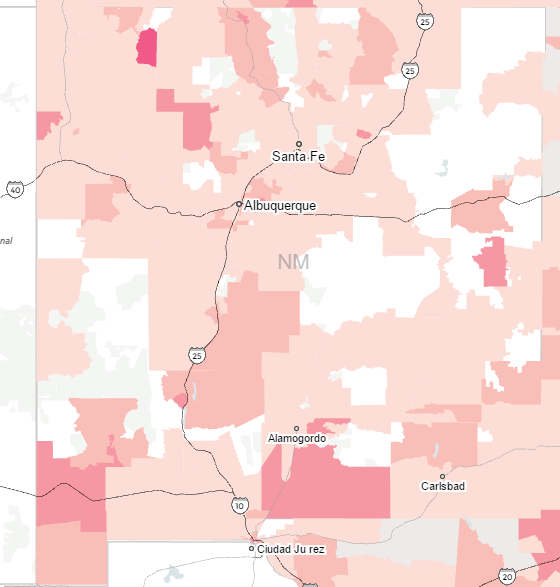 Screenshot of a map of childhood blood lead testing data.

Yesterday, we wrote about attempts to get answers from the New Mexico Department of Health about elevated lead levels in children.

In December, Reuters published a map on childhood lead poisoning across the nation. The story, with an accompanying map, “Off the Charts: The thousands of U.S. locales where lead poisoning is worse than Flint,” looked at where children were tested for lead and how many had high levels of the toxic metal in their blood.

According to Reuters, about 2.5 percent of American infants and children six years-old and younger have elevated lead levels in their blood. In Flint, a city grappling with lead contamination from its water system, 5 percent of the children screened had elevated levels. Meanwhile, in New Mexico between 2006 and 2015, those numbers were even higher in 29 communities statewide.

For months, we tried to speak with someone at DOH who could answer specific questions about New Mexico’s lead exposure problems.

In March, the department’s spokesman emailed a two-page fact sheet, but it only addressed a few questions. Repeated requests to interview the agency’s health experts were ignored.

Publishing yesterday’s piece as an essay wasn’t something we took lightly. But we decided that rather than continue asking public officials questions they weren’t answering, we could better serve the public by explaining the seriousness of the topic. We also wanted to explain our access problems with state and hoped another media outlet might pick up the story and ask those questions as well.

Within hours of publishing our story, that’s exactly what happened.

In a show of journalistic solidarity—one that’s rare between traditional and online media outlets—KOB-TV picked up on our story yesterday and mentioned our troubles.

DOH responded to the television station the very same day, and the agency’s spokesman appeared on camera to answer questions.

Reporter Kasia Gregorczyk closed her broadcast with this message, “We do believe that there is more to be done here, and we will continue to look for more specific answers regarding what’s being done about the issue of lead poisoning in our state.”

Just before 4 p.m. Wednesday, an hour before the station’s broadcast was scheduled to begin, we received an email from the DOH spokesman, which we added to our original story. He apologized for the delay, writing that the state’s 60-day legislative session that ended last month put large demands on his time and attention. He also offered some background information on lead testing, as well as a statement from DOH Secretary Lynn Gallagher:

“Keeping children safe from lead poisoning is a priority for the Department of Health and for the state.  At the community level, it requires everyone’s attention in order to prevent, what the CDC considers the most preventable environmental disease among young children. The Department of Health employs a team of health professionals who work with parents, pediatricians, other healthcare professionals, other state agencies, and the public to ensure appropriate testing, education and monitoring take place in a coordinated manner state-wide.”

Yesterday’s responses, to NMPR and to KOB, represent a start. But we still have some questions and they can’t be answered in an email or even a list of guidelines.

This is the full list of questions we’ve emailed DOH since January, with the hope of learning more from the department’s experts, rather than a spokesman or political appointee. The italicized ones still demand attention:

-As I understand it, all children enrolled in Medicaid must be tested for lead exposure at 12 and 24 months.
-What are the other reasons children would be tested?
-What happens with those results, in general?
-And what happens to a child whose tests come back with the presence of lead? What is the treatment?
-Does the agency identify what caused the exposure, and what might be done about it? (For example, who would pay for or help with the removal of lead pipes or paint or whatever was causing the problem?)
-Does the agency identify clusters or areas of concern? (For example, a particular neighborhood, or an area where people are drinking well water as opposed to being on a water system?)
-Then I have specific questions about certain zip codes and areas.
-Lastly, I have questions about the long-term impacts of lead exposure on children, and on communities where exposure levels are high.