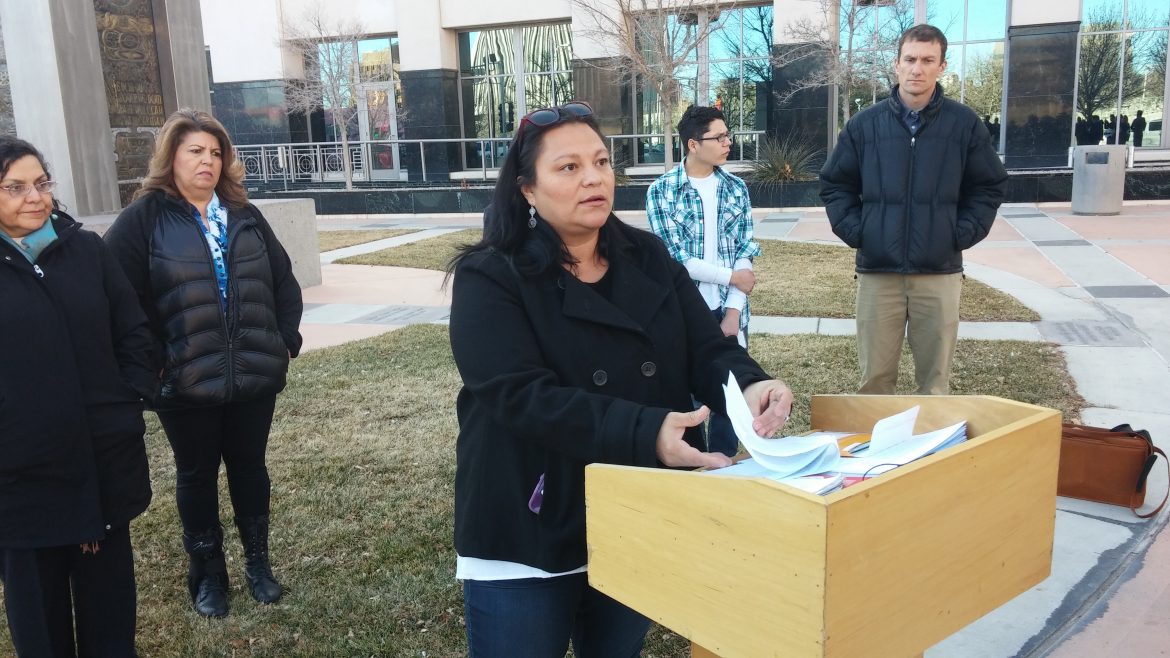 More than a year after Albuquerque Public Schools denied her public records requests related to an incident involving her autistic son, Laura Gutierrez is taking the state’s biggest public school district to court.

Her lawsuit, filed last month in Albuquerque’s state district court, alleges APS wrongly withheld public records responsive to requests she made in late 2015. She is asking for the school district to release the records and pay damages for violating the state’s Inspection of Public Records Act (IPRA). Under IPRA, public agencies can be fined up to $100 per day in damages for not fulfilling public records requests if the person who brings the suit can prove damages.

“I have decisions I need to make as a parent, and without these records I can’t move forward,” Gutierrez said in an interview.

APS spokeswoman Johanna King declined to speak about the matter, telling NM Political Report that the school district’s policy is “to not comment on lawsuits.”

Gutierrez wants records on the school district’s internal investigation of a 2014 incident during which an APS police officer allegedly used force against her then-13-year old son, Michael Bruening. The alleged incident happened after Bruening, then a student at Jimmy Carter Middle School, ran off school grounds.

After the incident, Gutierrez publicly alleged that the APS officer used a taser against her son. The school district quickly denied the claim, saying its officers don’t have tasers and cited a different account from an eyewitness.

APS investigated the officer and concluded he had done nothing wrong. Investigators included an interview with Bruening.

Gutierrez, who was not in the room during her son’s interview, wants to see that interview transcript and several other records related to APS’ investigation of the officer. Gutierrez said she wants to know what her son told school officials in the interview.

“Not being able to be present in that room when he was interviewed is very concerning to me,” she said.

She also requested an evidence log, the names of those who handled the evidence and a copy of the supplemental report from the field investigator.

APS only gave Gutierrez an “interoffice memorandum” and cited two exemptions under IPRA to withhold other information.

One of the exemptions the school district used is known as the law enforcement exemption, which allows public agencies to hold back law enforcement records “that reveal confidential sources, methods, information or individuals accused but not charged with a crime.” APS also cited an exemption that allows public agencies to withhold documents that “are matters of opinion in personnel files.”

Last fall, New Mexico Foundation for Open Government President Gregory Williams told NM Political Report that neither exemption was enough for APS to withhold all documents from their investigation. The law enforcement exemption, Williams explained, should only apply to things like the names of witnesses asking for confidentiality and confidential law enforcement methods like sting operations. Entire investigations are not matters of opinion and can’t be withheld, he said.

The lawsuit echoes this reasoning by stating that APS can redact any “personal identifier information” but not withhold it.

Last fall, Attorney General Hector Balderas, who has the authority to enforce IPRA, found APS in violation of the public records disclosure law for not responding to Gutierrez in a timely manner.

Namely, APS did not respond to Gutierrez’s IPRA requests for nearly a year, saying she didn’t request them from the right school district employee. Balderas’ office disagreed last September, saying that “interdepartmental or interagency problems” do not excuse public agencies from responding to public records requests.

APS then responded by formally denying most of Gutierrez’s requests after Balderas’ finding.

During the legislative session, state Sen. Linda Lopez, D-Albuquerque, unsuccessfully sought to amend the IPRA statute to include language requiring all parents and guardians have access to school investigations of alleged law enforcement misconduct against their child. FOG opposed the legislation, which passed the Senate but stalled in the House, saying those public records are already covered in IPRA.