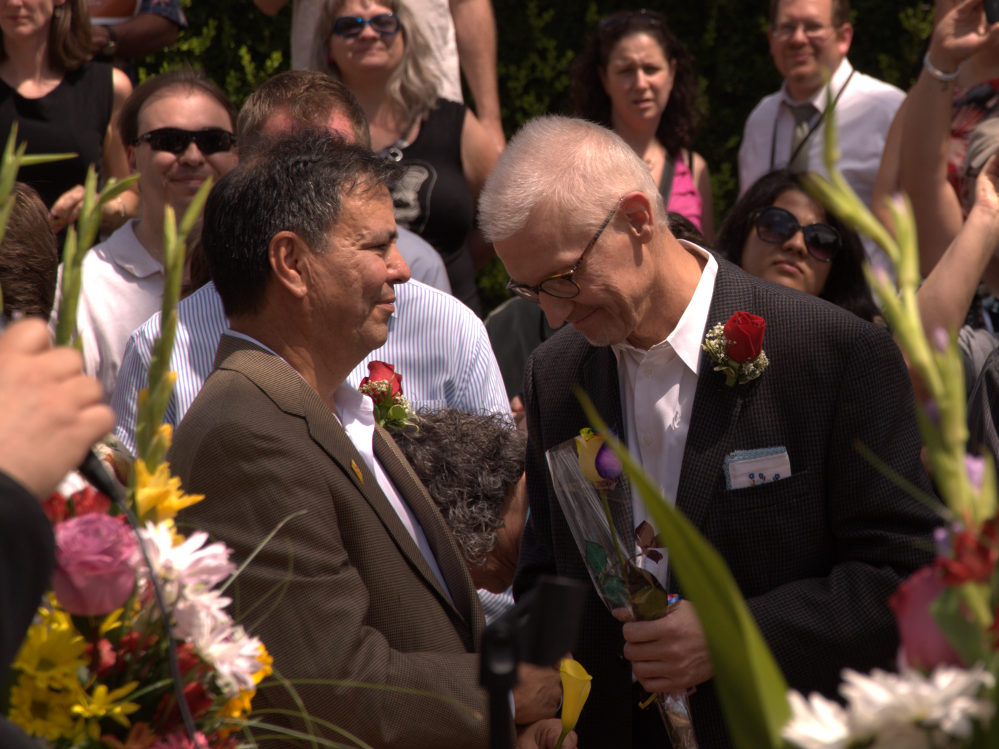 An Albuquerque man who was denied Social Security benefits from his deceased husband  intends to bring the issue to federal court.

Anthony Gonzales* married his long-time partner Mark Johnson in 2013 in a mass public wedding in downtown Albuquerque. It was the first time same sex couples could legally marry in Bernalillo County**.

When Gonzales initially filed his claim for Johnson’s benefits, the Social Security Administration denied his request on the grounds that he and Johnson were married for less than nine months, the minimum time required to qualify for benefits.

After Social Security denied both his initial claim and formal request to reconsider, Gonzales recently took the next step by filing an appeal with the federal agency Tuesday to once again ask for his husband’s benefits. Social Security typically pays surviving spouses a portion of the deceased’s eligible income after they die.

In a tearful interview with NM Political Report Gonzales said the entire process brings back memories of the man he lived with for 16 years. Gonzales said Johnson was “smart, funny, artistic and creative.”

“It’s tough when I have to sit down and think about it and write the appeals,” Gonzales said.

Neither Gonzales nor his attorney Mia Touchet expect the Social Security office to change its earlier decisions.

“I’m not optimistic,” Touchet said, adding that their ultimate goal is to make an equal protections argument to a federal judge.

Since the Social Security Administration generally follows rules instead of creating them, Gonzales plans to exhaust every option before he files a lawsuit.

“From the beginning I was told Social Security was very rigid in rules and regulations,” Gonzales said. “We decided to follow the appeals process to the end.”

The Social Security official who took Gonzales’ reconsideration request also acknowledged that his case should probably be taken to court.

Administrative Law Judge Michelle Lindsay wrote in her denial of that she could not approve Gonzales’ claim under current rules, but added that he may have a legal case and urged him to appeal her decision.

In her eight page denial letter, Lindsay repeatedly noted that Gonzales and Johnson most likely did all they could to legally marry, mentioning Iowa was the closest place the couple could have married legally before New Mexico recognized same-sex marriage to satisfy the nine-month requirement. According to Lindsay’s letter, the Social Security Administration has allowed benefit payments to couples who were unable to marry for nine months because of certain circumstances. She used one person “unable to divorce a prior spouse because they were institutionalized” as an example.

“The inability for [Gonzales] and Mr. Johnson to marry is similar to the inability to marry because the number holder was unable to divorce an institutionalized prior spouse,” Lindsay wrote.

Regardless, the judge denied Gonzales’ request.

One other possible yet unlikely solution is for Congress to change the law.

“We understand that the 9 month requirement is intended to reduce the likelihood that people would marry only to receive survivor benefits,” Lujan Grisham wrote. “However, Mr. Gonzales and his husband have demonstrated a life-long commitment to each other and were together for 16 years before they married.”

Gonzales said the last time he spoke to Lujan Grisham’s office, they told him they were considering filing legislation to address cases like this. A case like this, Gonzales said, can’t be unique.

“I’m sure I’m not the only person in this situation,” he said.

Gonzales said while he has a great support system in family and friends, he’s also been told he should move on and live his life.

“I’m struggling to maintain a balance between moving on and fighting for what I believe is right and fair,” Gonzales said.

While the process is arduous, Gonzales said he’s ultimately doing it for his husband.

“It’s hard,” Gonzales said. “But it’s something I’m willing to do for him.”

** The 2013 mass wedding ceremony was organized by ProgressNowNM, which helps find funding for NM Political Report. ProgressNowNM does not have any editorial input on this or any other story.