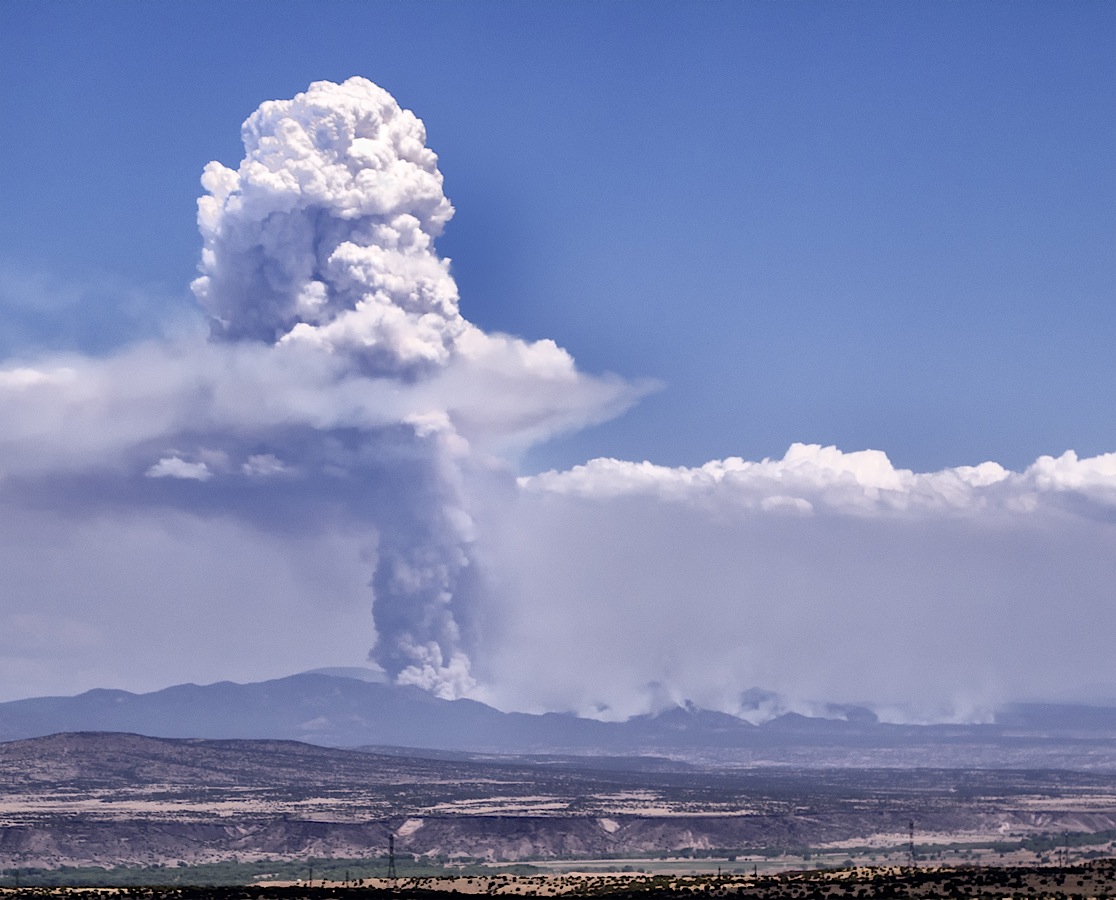 Las Conchas Fire burned more than 156,000 acres of forest in the Jemez Mountains in the summer of 2011.

Six years ago this June, an enormous cloud above the Jemez Mountains was visible across northern New Mexico to south of Albuquerque. Punching into the clear, blue sky, it looked like a thundercloud, or even a mushroom cloud. That day, heat from a wildfire was rising so quickly that the winds couldn’t push it away, forming a pyrocumulous cloud. By the time it was extinguished, Las Conchas Fire had burned 156,000 acres.

“The first day, I remember I was in Washington D.C., and got the report it was 40 acres in size,” said Jorge Silva-Bañuelos, who is now superintendent of the Valles Caldera National Preserve. The next morning, the fire was reported at 43,000 acres. “I thought that must be a typo,” he said. “The fire grew so fast, I’m still surprised that not a single human being lost their life in this fire.”

Silva-Bañuelos was speaking this week at the “all-hands” meeting of a collaborative forest group focused on the Jemez Mountains. The project covers 210,000 acres spread across the Santa Fe National Forest, Valles Caldera and the Pueblo of Jemez. Since natural disasters like wildfires as well as floods and insect infestations don’t stay within fencelines, the Southwest Jemez Mountains Resilient Landscapes and Collaborative Forest Landscape Restoration Project includes about three dozen federal, tribal, state, industry, nonprofit and university partners.

Now, while political whirlwinds spin around the nation and some lawmakers whip up distrust of scientists and set back efforts to protect people and the environment from pollution and climate change impacts, the meeting in Santa Fe represents something entirely different. The project brings together people from different backgrounds, scientists from a range of disciplines and even environmental advocates and the timber industry.

The goal is to return the Jemez’s forests to their more natural state. That means closer to what the forests were like before industrial-scale grazing in the late 1800s and a century’s worth of fire-suppression led to the thickets they had become by the end of the 20th century, when overgrown forests, drought and warming conspired to ignite giant fires like Las Conchas.

In the western United States, large wildfire activity has been increasing since the 1980s. And as the climate has warmed, the number of wildfires has increased while wildfire season has lengthened by an average of two months.

In the Jemez Mountains, forests have been hammered by bigger and nastier fires since the late 1990s, when the Dome Fire burned about 16,000 acres of the Santa Fe National Forest and Bandelier National Monument. Then, in 2000, the Cerro Grande fire destroyed or damaged 280 homes in Los Alamos and destroyed 40 buildings at the national laboratory. Started as a prescribed fire, Cerro Grande burned out of control, lighting up 48,000 acres. That fire changed the dynamics of how land managers approached prescribed fires and wildfires in general, said Silva-Bañuelos. But its burn scar likely saved Los Alamos 11 years later.

“Las Conchas would have been completely unstoppable without that burn area,” he said.

Today, places like the Valles Caldera, Santa Fe National Forest and Bandelier National Monument are still struggling with the post-fire impacts from Las Conchas and the 2013 Thompson Ridge Fire, which burned 24,000 acres in the area. Post-fire impacts include erosion, flooding and huge changes to the forest itself. In some places, fires burned so hot that the forest isn’t recovering. Ponderosa pine forests are now scrublands and some patches still remain scorched, the soils fire-hardened and nearly lifeless.

One community hit particularly hard by the fires and their aftermath is the Pueblo of Santa Clara.

“This is our ancestral homeland,” Tafoya said of the forest, “this is a resource used on a day-to-day basis by members of our community.”

After the fires came the floods. With trees and grasses gone, water ripped down arroyos, moving in dangerous, churning sheets down the mountainsides. During his presentation at the meeting, Tafoya played a video he filmed while waiting for one of those floods after a summer storm delivered about a half-inch of rain upstream.

The video opened with a dry arroyo and pine trees in the top third of the frame. “Watch the trees,” Tafoya said.

Suddenly, churning black waters filled the top of the frame. The video flickered off and then changed perspective as Tafoya gets into his truck. Within seconds the water, ash and debris had roared across the road. The camera remained steady while the truck backed away from the water heading toward it on the road.

Tafoya filmed that video more than two years after Las Conchas burned through the watershed.

Prior to Las Conchas, the largest flood events for Santa Clara Creek were predicted at about 5,600 cubic feet per second (cfs), Tafoya said. Now, that predicted “hundred year flood event” is estimated at more than 21,000 cfs. Meanwhile, where it flows through the village, the river channel has the capacity hold about 9,000 cfs.

For centuries, the channel could handle twice what the biggest flood might have been. Now, that’s no longer the case.

In addition to the fire itself and the flooding that comes afterwards, impacts include invasions of non-native trees, shrubs and weeds and landscape-level changes to forests and watersheds.

“As daunting as it is, it’s great we have the science to drill down and to fundamentally, intellectually grasp what’s going on and to develop goals and objectives to deal with what’s going on,” said Bob Parmenter, Chief of Science and Resource Stewardship at Valles Caldera National Preserve.

Parmenter doesn’t seem like the type of guy to fret. In the face of all of these problems, he appears to have remained upbeat and excited about the science of everything from watershed restoration to the tree-ring analysis that provides a glimpse into the size and intensity of fires that burned in the mountains all the way back to the 1500s.

As ringmaster of the meeting, Parmenter introduced one scientist after another over the course of a day and a half of talks. People shared their data about how forest thinning, prescribed fire and wetlands restoration projects are working out as well as how plants, birds, elk and fish are responding to changes on the landscape. During the meeting’s second day, participants and members of the public reviewed the year’s upcoming plans for restoration and thinning and talked about what is and isn’t working.

These discussions are a critical part of the project, said Parmenter. By studying aspects of the landscape like cultural resources and the socioeconomic impacts of the project on local communities, managers can make better decisions about what to do next.

“You have to be out there monitoring what you did,” Parmenter said during an interview. He explained that they have their lists of goals and projects but always look at the monitoring results to decide what’s going to happen next year.

The ten-year project was borne out of the 2009 Forest Landscape Restoration Act, championed by then-Sen. Jeff Bingaman. That act promoted collaborative, science-based ecosystem restoration in certain areas identified by the Secretary of the U.S. Department of Agriculture, which oversees the Forest Service, as priorities across the nation. The Southwest Jemez project is one of 23 such projects nationwide.

Parmenter said when Bingaman envisioned this effort about a decade ago, the idea was to “get people who are knowledgeable, passionate, informed and have an open mind to sit down together and talk about a problem.”

Impacts of the wildfires aren’t just limited to the Jemez Mountains. After Las Conchas, the Albuquerque Bernalillo County Water Utility Authority had to shut down its diversions from the Rio Grande for three months because of ash and debris in the river.

“There’s not going to be an overnight solution, but we’re making really good progress,” Parmenter said. “The treatments are having the desired effect.”

He explained, for example, that there are hundreds of wetlands restoration projects. “And with our volunteers and collaborators, we knock off 50 sites a year that we don’t need to come back to. So in 10 years, we’ll have all those done.”

It’s the same for forest thinning projects, he said.

“Once we get the forest back to a stable ecosystem like it was in the 19th century, then natural fires can just run, and we can manage them pretty easily,” Parmenter said. “That’s the basic goal, to get it back to where it was. That will increase water function, which is going to be important if temperatures keep going up, which every indication is that they will.”

The work will help conserve the water that makes its way into streams and rivers, groundwater and wildlife habitat and fisheries.

The project is also providing an economic bump to the area. According to Matt Piccarello of Forest Stewards Guild, one of the project partners, the Collaborative Forest Landscape Restoration Project is supporting local wages and jobs and has indirect economic benefits. He estimated that more than 45,000 acres have been “treated” since 2010 through hand and mechanical thinning and prescribed fire projects. That work supports local jobs and has indirect economic benefits, too, since crews buy products locally.

Terry Conley is one of the people who has benefitted from the project. He’d been working on thinning projects since 2001, shortly after the 95,000-acre, privately-owned Baca Ranch was bought for about $100 million by the federal government and became the Valles Caldera National Preserve.

“I got into the thinning business then but we would just leave it, grind it or burn it. And one of my goals in life was [figuring out] what to do with it because we have to be able to utilize some of this wood,” he said during the meeting. Conley said that the forestry industry in the Jemez disappeared decades ago.

Over the years, Conley has been building a small joint business with the Pueblo of Jemez, Walatowa Timber Industries. Now, there’s a sawmill where crews can bring the small-diameter wood. That’s wood that needs to be removed from the forest, but which isn’t as valuable as the large trees. The mill even has a new building that the Forest Service helped the pueblo build with a matching grant. When it opens up later this spring, that “micromill” will process the residue from the larger mill and make pellets that can also be sold.

“It’s been 20-something years since we had a facility like this in northern New Mexico,” Conley said. “We sell wholesale and retail right out of the yard: pellets, lumber, if we can cut it, we’ll make it for you.”

Correction: an earlier version of the story said that Las Conchas had grown to 4,000 acres on it’s second day. Parmenter emailed with the correction that it was actually 43,000 acres.