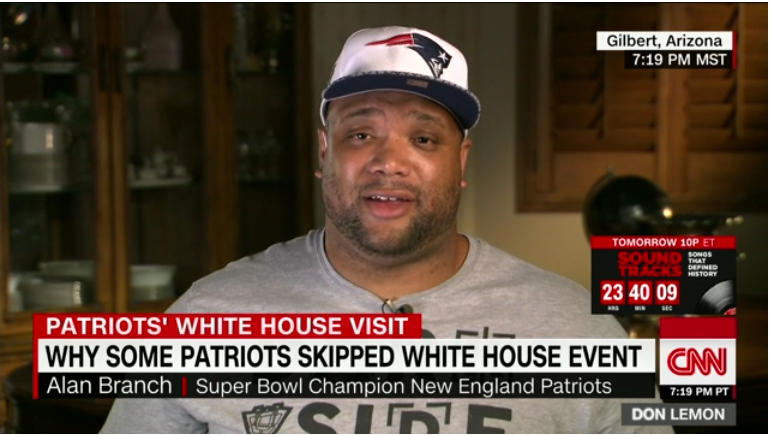 A New England Patriots player who was born and raised in New Mexico was among those who skipped out on a White House meeting with President Donald Trump this week.

Alan Branch, a defensive tackle for the Patriots since 2014, played high school football at Cibola High School in Albuquerque before going to college in Michigan. He discussed why he chose to not attend the White House visit on CNN Wednesday night from his home in Arizona.

He cited sexist remarks made by Trump where he was caught on tape before an Access Hollywood taping. The Washington Post first reported on the tape.

Branch said it wasn’t about politics.

“For me it was a personal matter. What President Trump said on the bus really struck a nerve with me,” he said. “I’m a father of three daughters and I have a son as well and I just can’t see myself having any type of interest to go meet this person that said such horrible things.”

Branch also said he would rather spend time with his family, noting he would have had to miss two of his daughter’s softball games to attend.

“For somebody to have me miss family time, which I don’t have during the season, that’s someone I’d have to respect,” he said. “And I don’t have enough respect for him to take the time away from my kids and my wife to just shake his hand. That’s just not me.”

Fewer Patriots players attended the ceremony than the last time they won the Super Bowl.

A team spokesman disputed that the drop in players was significant when speaking to The Boston Globe:

“When you win two [Super Bowls] in three years, fewer people go than one in 10 years,” he said, noting that player turnout for the White House ceremonies between 2002 and 2005 decreased steadily.

“It’s just the way it goes,” Stacey James said. “It’s a long day. It’s a cool thing you do once — maybe you do it twice — but it’s just not necessarily something you choose to do every time. We had people today who were attending funerals, who were sick — it wasn’t political; it’s just life.”

The Patriots were the first team to visit the White House after winning a championship. The Chicago Cubs, who won the World Series for the first time in 108 years last fall, visited the White House days before Barack Obama left office. Obama is from Chicago, though he is a White Sox fan, not a Cubs fan.

For his part, Branch said he hoped that Trump would be a good president.

Other members of the Patriots organization supported Trump, including owner Robert Kraft and coach Bill Belichick. Quarterback Tom Brady counts Trump as a friend, though he did not attend the White House meeting because of family issues. Brady avoided saying whether or not he voted for Trump or supported his campaign.

Branch was first drafted in 2007 and won two Super Bowls, both with the Patriots. He recently signed a two-year extension to stay with the team.