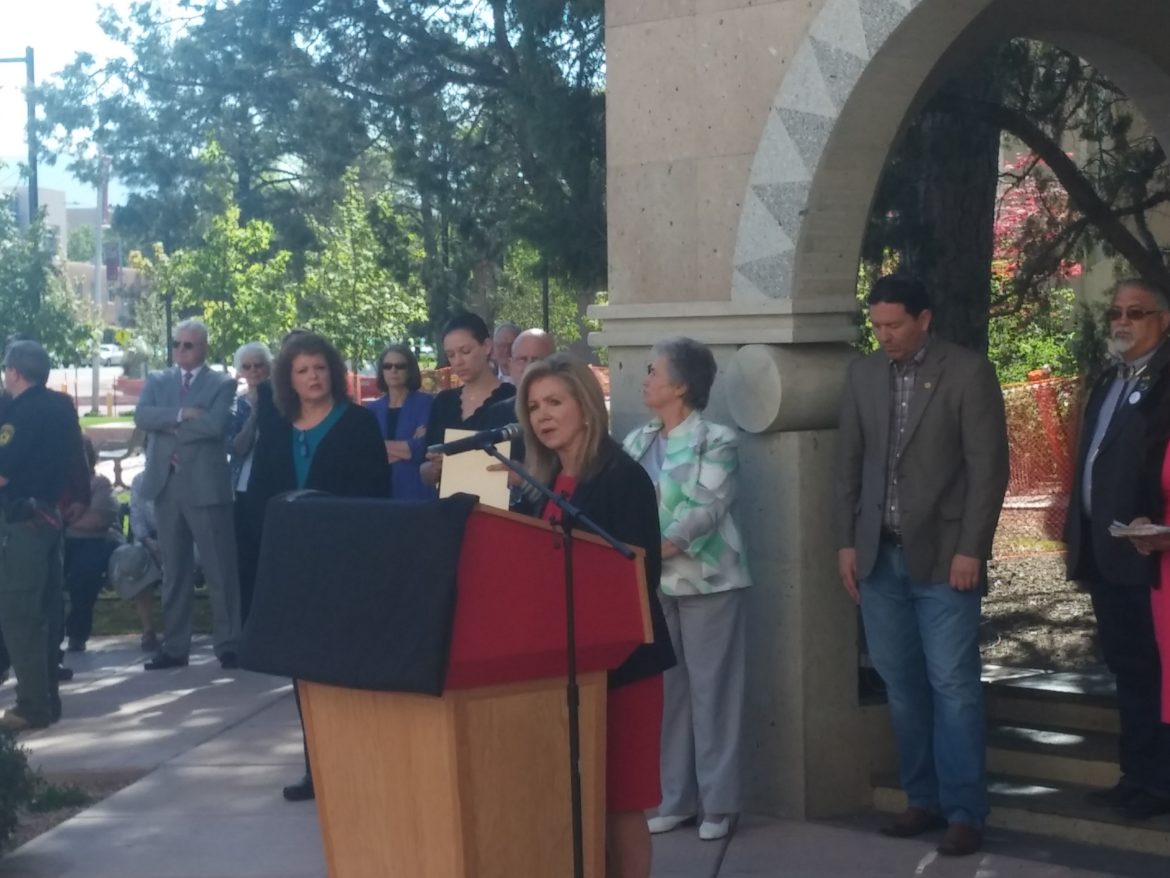 Among those who spoke at the event were Rep. Marsha Blackburn, R-Tennessee, New Mexico Rep. Steve Pearce, a Republican and Washington D.C. attorney Catherine Glenn Foster.

Blackburn, who chaired the controversial congressional Select Panel on Infant Rights, said she came to “join my colleague in the House [of Representatives] and those in New Mexico that have worked on the issue of life.”

The Select Panel released a report in January faulting the University of New Mexico for lacking protocols to “ensure the survival of infants who show signs of life following extraction from the uterus.” It also scrutinized UNM’s relationship with Southwest Women’s Options, an abortion provider that has donated fetal tissue to the university for scientific research.

Supporters of abortion rights, as well as minority Democrats in the Select Panel, have dismissed the report and the panel’s investigation for using “McCarthy-era tactics” to conduct “an end-to-end attack on fetal tissue donation and women’s health care.”

Pearce contended that “the laws are clear” and that “we’re simply stating, ‘Do not violate the law.’”

The Select Panel made 15 criminal referrals for its research of abortion providers and educational institutions across the country, including to New Mexico Attorney General Hector Balderas. To date, Balderas has not acted on the referral to his office.

The rhetoric got more heated when Father Stephen Imbarrato, an Albuquerque priest who has been outspoken in his advocacy against abortion rights, spoke. He called the Democratic Party of New Mexico “the party of death” and Dr. Paul Roth, the chair of UNM’s Health Sciences Center, “the driving force in the entire abortion cartel of New Mexico.”

In a brief interview, Pearce distanced himself from Imbarrato’s comments disparaging Roth.

“I was not on the Select Committee,” he said.

And as for the criminal referral in New Mexico, he said, “That’s up to the attorney general to decide.”

Congresswoman Michelle Lujan Grisham, a Democrat who represents Albuquerque, showed up to the press conference just after it ended. She criticized the Select Committee’s report as “pretty outrageous” and based on “completely false” information.

She also referred to an incident in 2015, when two anti-abortion activists purported to show undercover video of the women’s health provider selling fetal tissue for profit. Both undercover activists were indicted by a grand jury for allegedly tampering with a government record with the intent to defraud. A judge later cleared them.

“Really the only focus [of the Select Panel] has been for members to travel around, fundraise and create divisiveness and minimize opportunities for this university to credibly and professionally do the research that they need to do,” Lujan Grisham, who is planning to run for governor, said in an interview.

Both Blackburn and Pearce participated Tuesday in a benefit luncheon for New Mexico Alliance for Life in Albuquerque. The costs to attend that closed-door meeting were $50 per person, $450 for a table of 10 and $1,000 for a VIP table.

Tuesday also saw the launch of Abortion Free New Mexico, with which Bud and Tara Shaver, formerly of Protest ABQ, are affiliated.