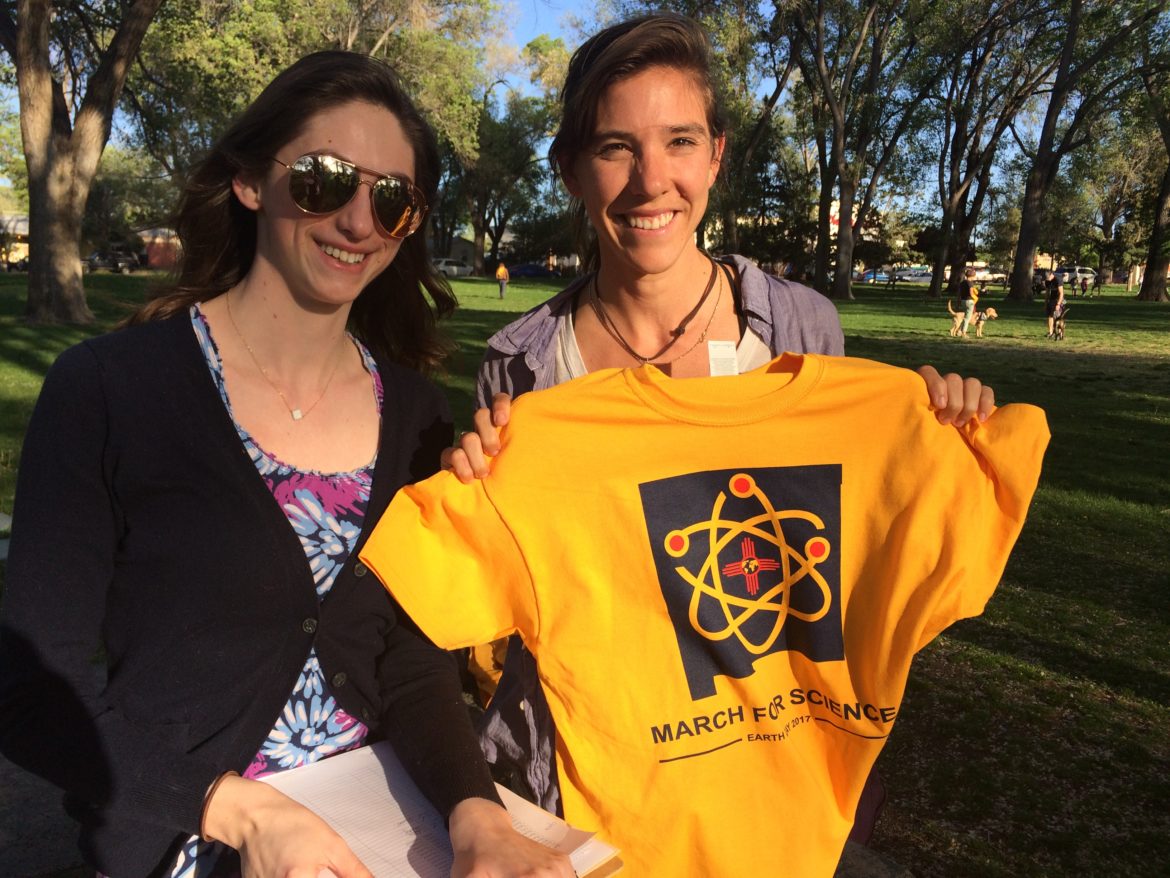 On Wednesday evening, students, baby boomers, dogs, kids and organizers for the Albuquerque March for Science spread across a corner of Bataan Park, making signs, trying on yellow T-shirts and getting to know one another.  When they rally in downtown Albuquerque on Saturday, expect their protest signs to be clever. Or very nerdy. In the park, participants were drawing inspiration from Isaac Newton, Jane Goodall and Neil deGrasse Tyson. One sign read, “Einstein was a refugee.”

The nonpartisan event, which is planned for Washington, D.C. and hundreds of cities around the United States, is modeled on the Women’s March in January.  In New Mexico, rallies and marches will take place in six New Mexico cities: Albuquerque, Santa Fe, Socorro, Las Cruces,  Silver City and Clovis.

For years, some politicians have called climate change a myth or a hoax and tried to degrade federal scientists by dismissing them as “bureaucrats.” But the political rhetoric against scientists and peer-reviewed research has intensified on the public stage, while at the same time national leaders propose cuts to spending on everything from clean air to cancer research.  Even before taking office, Donald Trump’s transition team asked the U.S. Department of Energy for the names of its employees working on climate change issues. And things have only gotten worse since then.

“There have been a number of places where science is under attack,” said Daniel Larremore, a postdoctoral student at the Santa Fe Institute and the organizer of the March for Science in Santa Fe. The current presidential administration placed gag orders on scientists working in federal government, he said.

“These are government scientists, doing non-classified work with public funding, taxpayer funding, and they’ve been asked by the current administration to not present their findings at conferences,” he said. “The way science moves forward is we look at the evidence, we try and formulate theories and explanations of that evidence. But if people aren’t allowed to share and participate in that conversation, that’s not science.”

He also pointed to the proposed budget cuts to agencies such as the National Institutes for Health and the U.S. Environmental Protection Agency (EPA).

The NIH invests more than $32 billion a year in biomedical research alone and funds work at universities, laboratories and medical schools for tens of thousands of professors, graduate students and researchers. Just in 2016, NIH awarded more than $57 million in grants to the University of New Mexico Health Science Center, $8.8 million to UNM and almost $8 million to New Mexico State University. Trump’s budget proposal would cut NIH’s total funding by almost 20 percent.

Trump wants to cut the EPA’s budget by nearly one-third and lay off one-quarter its workforce. He also proposed reducing the agency’s research and development arm by half. Last year, New Mexico received more than $36 million from EPA.

The president has also directed NASA to shift its focus away from atmospheric research, which includes climate change, and toward “deep-space exploration.” His proposal would slash the budget of the National Oceanic and Atmospheric Administration, which oversees that National Weather Service, by 17 percent. Although Trump left the National Science Foundation out of his budget proposal earlier this spring, it’s fair to assume that agency, which funds research related to everything from nanotechnology to atmospheric science, will end up on the chopping block, too.

“Those cuts have implications for an entire generation of scientists,” said Larremore, who has a PhD in applied mathematics and today studies the evolution of the parasite that causes malaria.

“Imagine if we took basically any large field or industry and said, ‘Now, because of political reasons, you’re subject to a 20 percent pay cut, and while we recognize that you’re the best at what you do, sorry, your predictions of climate change disagree with our current politics,’” he said. “That’s at a level that has crossed the line for a lot of people.”

Not everyone who works in the sciences will participate in the march, and at least some criticize the movement. One federal employee, speaking off the record, said given how critical the impacts of climate change are, it’s time to work. Not protest. Others employed by agencies and institutions, including the state’s national laboratories, have research or funding at risk but won’t publicly support the march.

“A lot of scientists are in a weird spot, as suddenly science is being dragged into politics and pushed around,” he said. Larremore acknowledged those scientists who have said that engaging in protests only makes their work more vulnerable to politics. “But I think if we learned anything from the women’s march movement, it’s that there are a lot of people who feel very passionately about this in and around the scientific community and who are willing to step up,” he said. “The women’s march also highlighted how many people care about these issues, regardless of how politics turned out this cycle.”

Lukas Bell-Dereske, left, is one of the co-organizers of the March for Science, which will happen in Albuquerque on Saturday

Lukas Bell-Dereske is one of the co-organizers of the Albuquerque march. Growing up in Michigan, he was fascinated by the forest and the connections between plants, soils and wildlife. That inspired him to try to understand things like how climate change and alterations in precipitation affect how plants and fungi interact with one another in the Great Lakes dunes, and how that affects dune habitats and plant diversity. He finished up his Ph.D. at the University of New Mexico last year and is about to return to the Midwest for a post-doctoral position at Michigan State University.

“The march is an opportunity for us to show that science is all around you,” he said. “And that it’s about seeking truth, seeking facts and trying to understand the world all around us.”

He said he and his fellow graduate students have talked about how to get more people involved in science. College campuses host lectures open to the public, he said, and federal agencies have “citizen science” projects, where people follow scientific protocols and collect data.

There’s a U.S. Department of Agriculture citizen science project in Las Cruces to crowdsource data on soil, vegetation and crops, for example, and another U.S. Environmental Protection Agency Urban Waters Program through which students and volunteers help collect baseline water quality data in the South Valley of Albuquerque.

NASA’s GLOBE Observer app lets people take environmental observations, like of clouds and sky conditions, that scientists use to complement satellite observations. With iNaturalist, people snap photos of plants and animals. By uploading them, they can crowdsource identifications and keep track of the species they’re seeing. The observations are also shared with repositories like the Global Biodiversity Information Facility, an open access site.

For parents, Bell-Dereske recommended bringing kids to a museum, or even just going outside.

“Take them to a park, help them explore the natural world around them or anywhere that makes them excited about learning about science,” he said.

Science requires passion, which oftentimes emerges early in a child’s life. “It’s good to be weird,” he said. “That’s a how a scientist starts.”

UNM’s Becky Bixby won’t be at the march. But that’s only because since the beginning of the semester, she’s been planning a field trip for her aquatics class to the Jemez Mountains.

“I decided not to cancel because I have 22 students signed up to go who will learn how to sample, who will learn how a river works,” said Bixby, a research assistant professor with UNM’s biology department and the associate director of the university’s Water Resources Program.

“With environmental sciences, we use basic science to help with things like management,” Bixby said. “Especially in New Mexico, aquatic science helps us maintain the health of our water and our rivers, and if you want to take it all the way up, it affects human health.”

Not all her students will end up studying biology or going into water resources or environmental science. Some are studying in the pre-pharmacy and pre-dental programs. Her goal with the class is to nurture good citizens who are well-informed about local aquatic science issues.

“Some people think that all scientists need to have PhDs,” she said. “And it’s not true.”

Five marches are planned for Saturday, which is also Earth Day, in New Mexico:

Update: We updated the story to include Clovis.