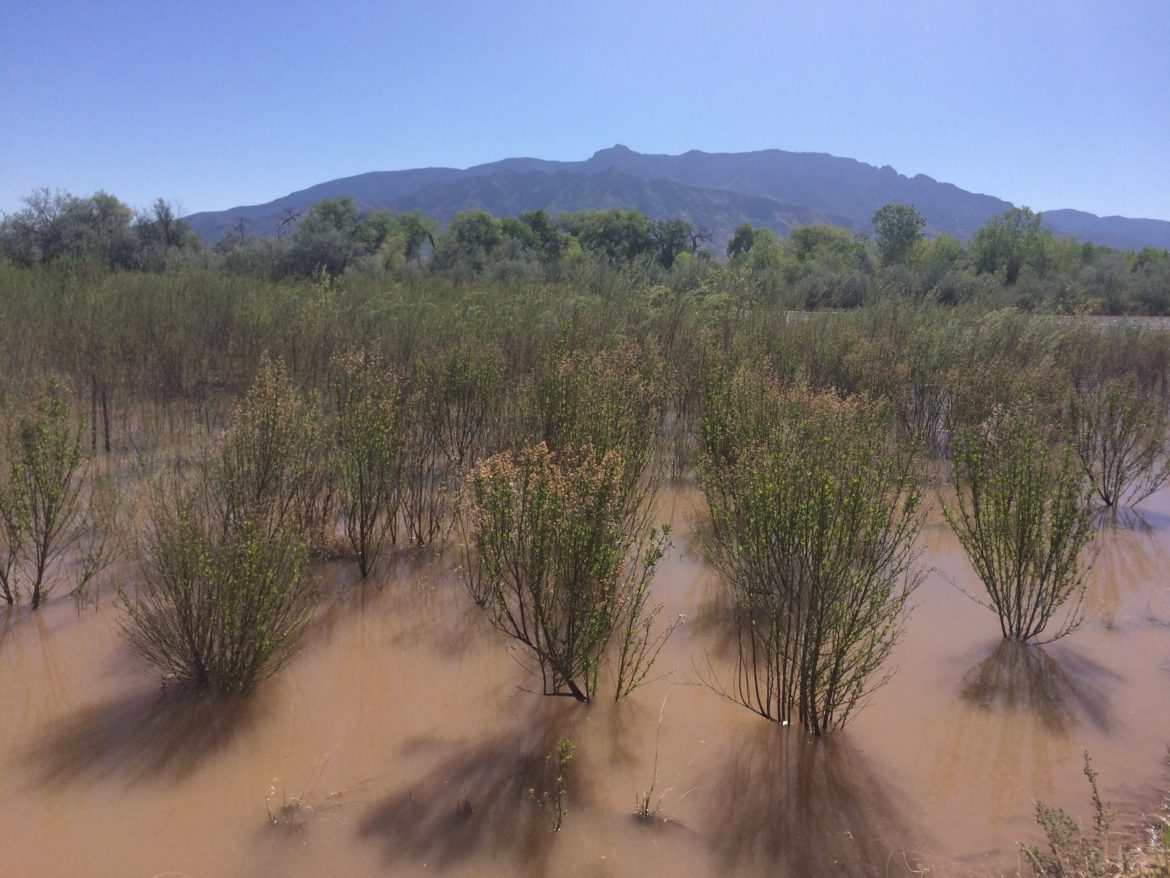 The Rio Grande in Corrales is overbanking, sending water to a restoration area on the west side of the river.

If you haven’t gone out to look at the Rio Grande, no matter where along its banks you live, now’s the time. The snowmelt is pouring down the channel, causing the river to overbank in lots of places throughout the Middle Rio Grande Valley. In southern New Mexico, the normally dry channel is also running as water managers are moving water from reservoirs to southern New Mexico fields and orchards and to Texas.

Speaking of snowmelt, March was an exceptionally warm month in New Mexico. According to the National Weather Service, 143 record-high temperatures were broken across 34 weather stations on 15 days. In Albuquerque and Roswell, this year brought the warmest March on record. And for both cities, it was the seventh above-normal March in a row.

In a letter last week to attorneys for oil and gas trade groups, the American Petroleum Institute and the Texas Oil and Gas Association, Pruitt wrote that the agency found that industry objections to the rule merited additional time and attention.

According to a story in the Santa Fe New Mexican:

Opponents of the regulations include the New Mexico Oil and Gas Association, State Land Commissioner Aubrey Dunn and Gov. Susana Martinez, who wrote a letter supporting a congressional measure to repeal the BLM methane rule. The repeal was approved by the U.S. House of Representatives but has stalled in the Senate.

Still no plan for Gila diversion

According to the Silver City Daily Press, the agency in charge of planning and managing the proposed diversion on the Gila River is going back to the drawing board. Again.

At the group’s meeting last week, Executive Director Anthony Gutierrez explained that the CAP Entity’s most recent plans couldn’t work, as they were slated for lands owned by the State Land Office and The Nature Conservancy.

Weren’t we supposed to have something to the Bureau of Reclamation so they could begin the NEPA process?” asked Entity Chair Darr Shannon. “I feel like we’re flailing. Not failing, but flailing here.”

To that, Gutierrez said he had acted with the information he had.

“I have asked and asked for input,” he said. “I had zero phone calls, zero emails, zero input from board members on what they would like to see.”

Shannon then admitted that the board should perhaps have been more involved, and recommended the board members read through Gutierrez’s revised scope of work and respond with any concerns or additions they would like to see.

In 2004, Congress passed the Arizona Water Settlements Act, which gave the state of New Mexico 10 years to decide how to use federal money to meet water needs in four southwestern counties. The state could pursue efficiency and restoration projects or receive a larger subsidy and build a diversion. In November 2014, the New Mexico Interstate Stream Commission (ISC) voted to pursue the diversion. Since then, the commission  and the CAP Entity have failed to come up with feasible plans for the diversion or its location, though that information was due to the federal government last summer.

New Mexico has already spent more than $11 million of an estimated $90 million in federal money it plans to receive. There are also more than $6 million in outstanding contracts and $1.7 million in ISC’s operating budget. Based on funding requests in other bills this legislative session, it appears as though the state plans to spend another $15.2 million on the project in Fiscal Year 2018.

Earlier this year, a bill in the New Mexico Legislature would have required the ISC to answer certain questions, including how much water is available from the river and how much the project would cost, before spending additional money.

Members of ISC and the CAP Entity opposed the bill, saying it would prevent the state from completing its plans and require environmental studies in time to receive the full federal subsidy.

The bill made it through the Senate Conservation Committee, but was tabled by the Senate Finance Committee, chaired by Democratic Sen. John Arthur Smith of Deming.

On Saturday, the Las Cruces Sun-News published a letter from Bishop Oscar Cantú, head of the Las Cruces Catholic Diocese, about the state’s plans on the Gila River. Cantú said people in southwestern New Mexico must establish water security for the future but pointed out that the proposed diversion is expensive, ecologically harmful and impractical. In the spirit of Earth Day, Cantú also wrote:

Fishermen, hunters, birders and hikers all enjoy this beautiful piece of nature in New Mexico. After a busy Holy Week and Easter weekend, several of my priests and I enjoyed a couple of days of camping, hiking and fishing along the Gila River. It’s amazing how nature has the ability to nourish and replenish the human soul. Indeed nature takes care of us, if we take care of it.

According to a story in the Farmington Daily Times, LOGOS Resources is planning to drill four new wells in the San Juan Basin within the next few months:

Today, the company controls approximately 165,000 net acres and 550 oil and gas wells, which produce approximately 40 million cubic feet of natural gas equivalent per day, making Logos one of the largest operators in the San Juan Basin.

“But we won’t be doing a lot of drilling because prices are so low,” he said. “The area we’re focusing on is about 45 minutes down (Highway) 550 toward Cuba,” he said. “It’s in the Gallup formation, near Nageezi.”

According to Baker Hughes, currently there are 340 active rigs in the Permian Basin, drilling new wells in both Texas and New Mexico. That’s up from 136 this time last year.

In an editorial on Sunday, the Albuquerque Journal wrote that rebounding energy prices and big spending by companies is good news for the state. That recovery is welcome news, wrote the editorial board, even as it serves as a reminder to broaden the state’s economic base so  that schools, hospitals and state agencies aren’t subject to boom and bust cycles.

The editorial board also had other advice for legislators:

In light of any expansion, it bears repeating that the Legislature should also have passed Senate Bill 307, which would have restored the New Mexico Oil Conservation Division’s legal authority to fine oil and gas companies for spills and other violations of state law. When the state Supreme Court stripped the OCD of that power in 2009, its collection of fines dropped from an average of $597,000 annually to $14,000 in 2010. Lawmakers have had eight years to correct that. Considering the recent industry ramp up and the uncertain fate of the federal methane rule safeguards, OCD authority to enforce the law is more than likely to become an even more needed protection in the near future.

That bill, which NM Political Report followed closely, passed through two committees, only to die in the Senate Finance Committee.

Mining companies and their shareholders need to be worried about drought.

Now, according to a story in Eos, a publication of the American Geophysical Union, researchers have come up with a way for companies to understand the financial risks of drought.

From the story, by Emily Underwood:

First, the team obtained historical records of drought frequency and severity using the Palmer drought severity index from 1950 to 2014. Combining those data with annual production values from mines of 15 companies, they calculated a risk index that reveals the likelihood of a severe drought occurring at each location each year and estimated how such an event would differentially affect mines’ annual production values and the companies’ overall portfolios.

Disclosure of those water risk management frameworks, she writes, would also help investors and government regulators.

To read the study itself, visit Water Resources Research.

And really, get yourself to the Rio Grande. The high flows are a beautiful site to see right now. Just in case you need some more motivation, I’ll leave the U.S. Geological Survey stream gage data for the river at the Alameda Bridge right here.