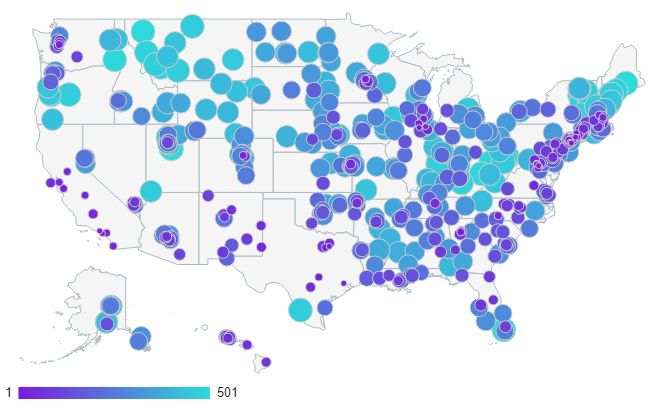 Wallethub map after study of diversity in U.S. cities.

A new study found New Mexico has six of the 100 most diverse cities when put up against all 501 of the nation’s largest cities.

The study also asked some experts about diversity and what it means for cities.

Tracy Xavia Karner, an associate professor and department chair at the University of Houston, said, “Diversity can fuel a vibrancy and dynamism that increases the quality of life for all residents.”

Anna C. Smedley-López agreed that there were many benefits, including “a lot of evidence that suggests that working in diverse teams fosters better problem solving skills, creativity and innovation.”

She cautioned that there is often “disparities across groups,” noting economic, educational, health and housing disparities as potential trouble spots.

The report found Hobbs had the third-most occupational diversity of any city in the nation, while Alamogordo had the fifth most “worker-class diversity.”

Albuquerque, the state’s largest city, ranked highest in cultural diversity, at 91st. The city, like the others in New Mexico, ranked low in religious diversity, at just 237th.