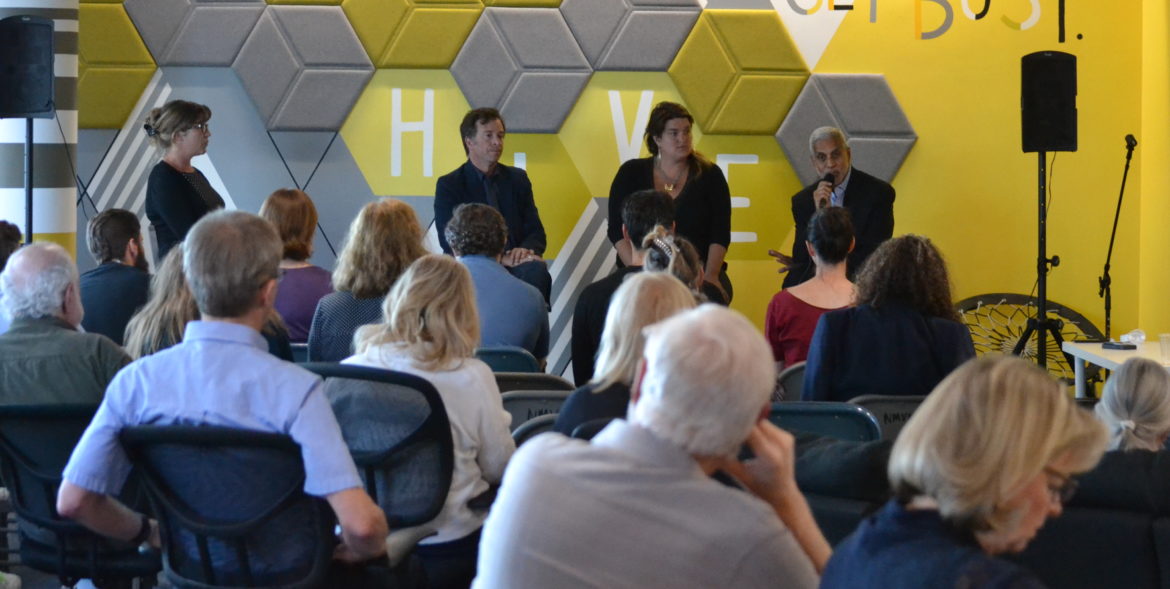 Brunner, who headed USDA grants for New Mexico for rural development under the Obama administration, described Trump’s first 100 days as “fast and scary, kind of like a rollercoaster.”

“You wake up in the morning, it’s something completely new and different every day,” he said.

Brunner warned that the effect of Trump’s “drain the swamp” rhetoric combined with picking officials without traditional qualifications to run federal agencies will “spread fear throughout the bureaucracy” and cause federal workers to “hunker down” and bring government’s delivery on services to the public “to a really slow lethargic pace.”

Brunner mentioned how in January, House Republicans evoked an obscure rule allowing them to drop federal employees’ salaries to just $1, which he argued is meant to “intimidate federal employees.”

“The [James] Comey firing is a sign that nobody’s job is secure,” he said, referring to Trump’s abrupt dismissal of the FBI director earlier this week.

Love, who directs the Santa Fe Dreamers Project, a legal services group that helps undocumented families, said the immigrant community began to feel the effects of Trump‘s incoming presidency the day after he was elected. The first casualty, as Love described it, was the mental health of children.

“They are not dumb, they listened to 18 months of attacks on their families, on outsiders,” she said. “They woke up [on Nov. 9] pretty afraid. That has not stopped at all. If anything, it’s intensified as arrests [of immigrants] went up and people started to disappear from our communities.”

Allegra described herself as having “no love lost” between her and the Department of Homeland Security, which houses the U.S. Immigrant and Customs Enforcement (ICE), under President Barack Obama. Obama, who she called the “deporter in chief,” deported more people from the country than any president before him.

“But he did it methodically,” Love said, explaining that Obama prioritized deporting people with unexecuted orders of deportation, people with aggravated felonies and recent entrants from Central America. “Trump removed that scaffolding and let the agents off the hook and said, ‘Our plan is to deport as many people as possible and you need to do this in any way possible.’”

Akhil described New Mexico’s Muslim community as comprised mostly of immigrants. He said many who normally travel back to their country of origin to visit family will not do so under Trump for the time being.

“Even if they’re citizens, they can be detained for even packing the wrong gel in their bag,” he said. “So the uncertainty is great.”

Under the Obama administration, Akhil said, “there was a little bit of humanity.” ICE would not enter “sacred ground” like mosques and places of worship, for example, to do detain a person “unless that person was criminally charged.” But he said now he fears federal authorities will cross that boundary, and he questioned what “sanctuary” will really mean.

Every time Trump speaks ill of minorities, Akhil argued, he sets a precedent “for an ICE officer to be as brutal and inhumane as possible.”

He also lamented how people in other countries “liken us to exactly how it is for countries ruled by dictators.”

“Now we are at a stage that’s so sad,” he said. “We’re at a stage or standard where we’re being reduced to a third world country.”

Still, each panelist spoke about positives. Brunner talked about the challenges New Mexico’s rural communities face—related to childcare, transportation, solid waste and access to health care—and how they need to hear from people with “exciting policies that solve people’s problems.” He described how rural areas in the state and country that voted for Trump and are often neglected by government.

Love said people could support immigrant communities by taking steps to learn Spanish, reaching out to different churches, volunteering to tutor students and donating to organizations that are working with immigrants. Abbas talked about how more than 2,000 people in Albuquerque rallied at the airport to support immigrant communities during the erratic rollout of Trump’s travel ban.

The NM Political Report News and Brews summer series will continue the second Thursday of each month on the 7th floor of the Simms Building in downtown Albuquerque.