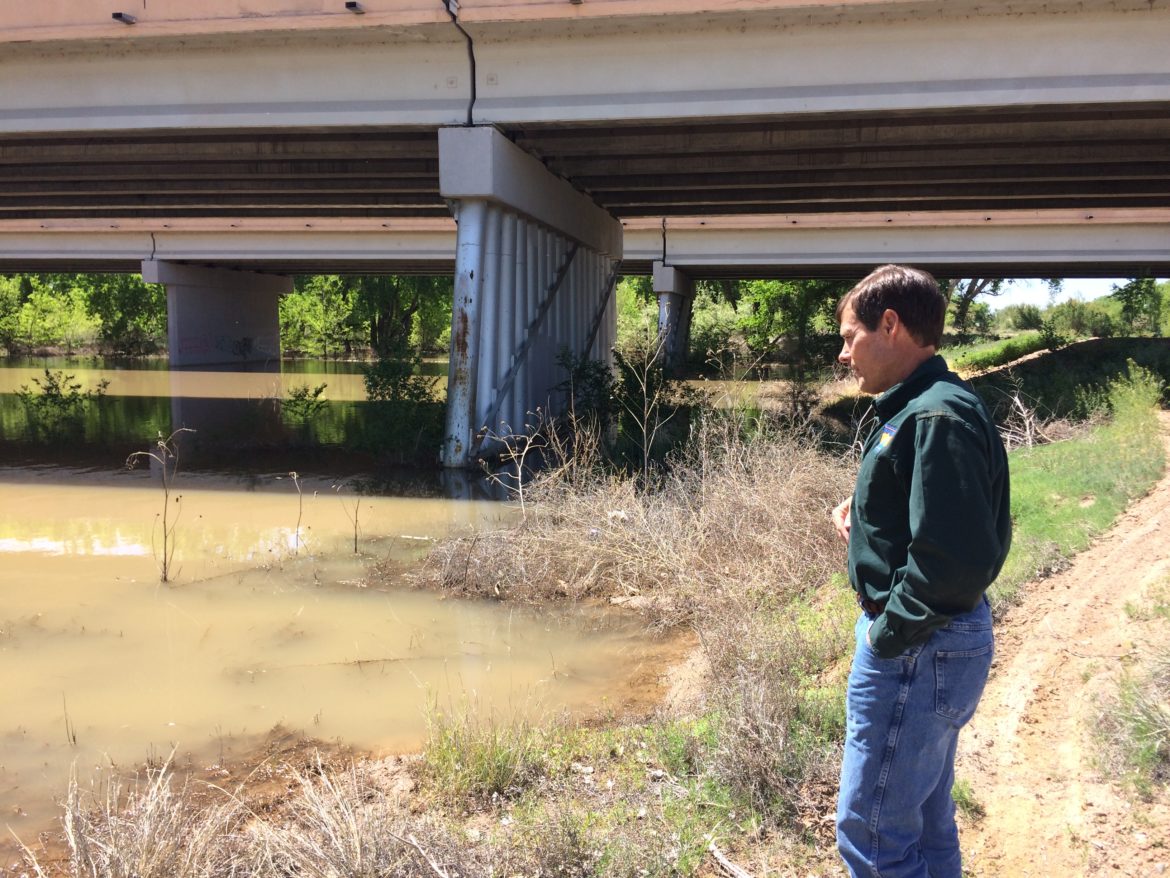 It doesn’t take an expert to see that the Rio Grande is swelling over its channel, spreading water into the bosque and nurturing the next generation of cottonwood trees.

That overbanking is good for endangered species like the Rio Grande silvery minnow and other more prominent species like cottonwood, said David Gensler, the hydrologist for the Middle Rio Grande Conservancy District (MRGCD), which delivers water to farmers and the six pueblos in the valley. “On the other hand, it makes us nervous about the levees,” he said.

For more than 40 miles in the Middle Rio Grande Valley, the river is up against its levees.

And the Rio Grande is still rising.

Last week, water managers were releasing 5,500 cubic feet per second (cfs) from Cochiti Reservoir, he said. And by Monday, he estimated, they’ll bump releases up to 6,000 cfs.

“[That’s the] biggest water we have seen for several years, I think,” said Gensler, who started working at the Middle Rio Grande Conservancy District more than 20 years ago. “We are seeing some seepage at the base of the levees, but so far it’s nothing to be alarmed about.”

MRGCD employees are patrolling the levees and watching for any changes on a daily basis, he said, and crews fill or compact areas where slumping is happening,

Gensler doesn’t expect the river’s flows to peak until June, and said he thinks there will be substantial flows until mid- to late-July.

There’s “still a huge amount of water sitting up in the Chama Basin, poised to come down,” he said. The mountains above the Chama Basin still have snow, and as it melts, it will flow into the Chama, a tributary of the Rio Grande.

In the stretch of the Chama River above El Vado Reservoir near Abiquiu, the river was flowing near 5,000 cfs last week. “Some think it peaked last Tuesday,” Gensler said. “But I think we have not seen it yet and that it will go higher next week.”

If you’re goin’ down South

As for the levees south of Albuquerque, Gensler said they’re doing their job.

In the far South Valley of Albuquerque on the west side of the river and just above the Interstate-25 bridge, the river channel is a few hundred feet east of the levee.

But for weeks, the river has been pressing up against the levee—all the way to San Acacia, more than 40 miles south.

On the non-river side of the levee—what some people might look at and call a “ditch”—is a drain. The water flowing there returns to the river downstream.

None of this appeared to worry Gensler, who said MRGCD has received reports from at least one person in Las Lunas who is worried about water in his home’s crawl space.

That water isn’t from behind the levees. Rather, as the river rises and spreads, the groundwater also rises closer to the surface. That’s where the moisture in crawl spaces or basements is coming from, Gensler explained.

For the MRGCD, the bigger problem is sand and debris.

“The sand and wood is getting pulled into our canal intakes and causes lots of trouble. Pipes get plugged,” Gensler wrote in a follow-up email. “If you stand on Isleta dam right now, there is a constant thunderous rumble as submerged and floating logs recirculate against the steel gates and the concrete pillars.”

Mean old levee taught me to weep and moan

When Hurricane Katrina struck the Gulf Coast in August 2005, storm surges breached the levees, flooding much of the city. After that, the U.S. Army Corps of Engineers took a closer look not just at the levees in Louisiana, but all across the nation.

Any that didn’t meet strict engineering standards were required to be repaired or rebuilt, said MRGCD’s Engineering Supervisor Ray Gomez. That included miles of levees within the district, which runs for more than 100 miles from Cochiti Reservoir to Bosque del Apache National Wildlife Refuge.

Some of those levees were built more than six decades ago. Others are “spoil bank” levees, built from the dirt excavated to create the ditches, canals and drains.

FEMA, the Federal Emergency Management Administration, re-mapped the floodplains, and suddenly, people who had never needed flood insurance for their homes were required to buy it.

“They had kind of a snowball effect right after Katrina,” Gomez said. “The Army Corps was looking to make sure they were protected.”

What happens in the Mississippi Valley is very different from the Middle Rio Grande Valley, he said, “but they held everyone to the highest standards.”

Since then, the district has been working with state, federal and local agencies on levee projects, which all together will cost hundreds of millions of dollars.

In 2009, partners spent more than $6 million reconstructing about three miles of a spoil bank levee in Albuquerque’s South Valley.

Currently, they’re working on a 7.2 mile project in Socorro. That entire project, Gomez said, is 43 miles long. They’re also looking at the levees in Bernalillo and Valencia County. The Valencia County project, he said, would be about 53 miles long and is estimated to cost a quarter of a billion dollars. There’s also a stretch of the river in Albuquerque, from Montaño Road and south for about three miles, that doesn’t have a levee. Gomez estimated that project could start later this year or in early 2018.

“This has to be a long-term planning process,” he said. It also requires a lot of federal help, in terms of funding and expertise. “These things don’t happen overnight, and it costs the local government a lot of money, too.”