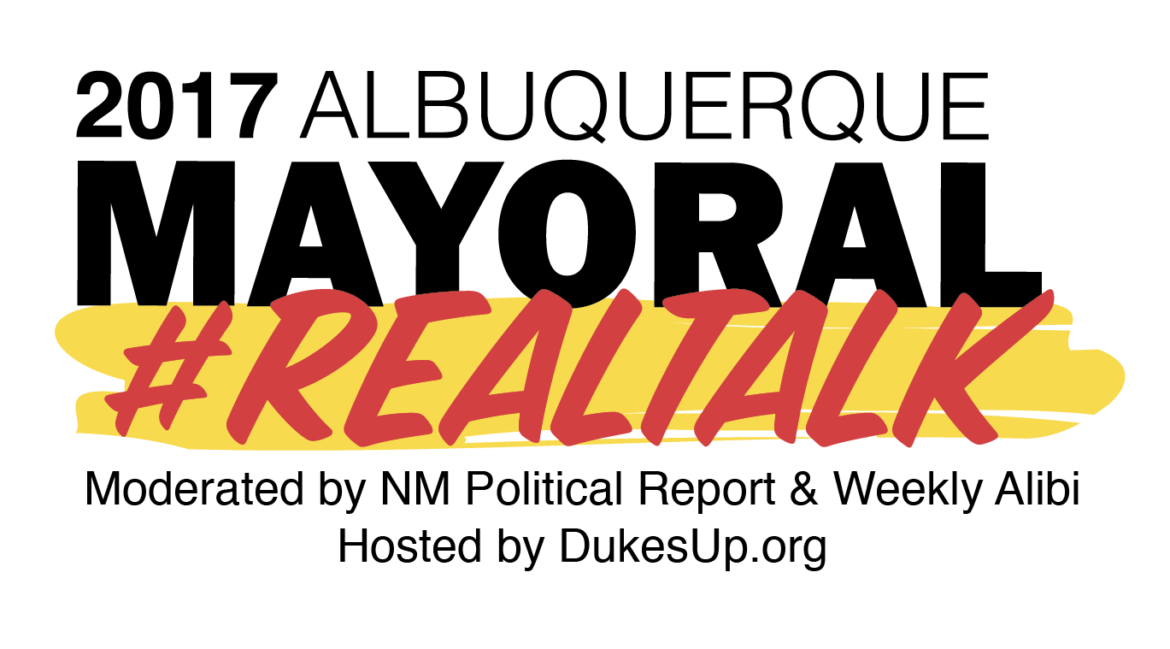 NM Political Report along with the Weekly Alibi and the community group DukesUp.org will host a mayoral forum on May 23.

Update: Tickets are sold out.

Candidates who accepted the invitation were asked to submit their answers to the following question.

What costs and/or benefits do you associate with allowing the Albuquerque Police Department to assist in enforcing federal immigration law in Albuquerque?

The qualification for the debate was not the content of the answer, but instead whether they chose to answer or not. The answers below are as the candidates turned them in.

“There is no benefit to allowing the Albuquerque Police Department to assist in enforcing federal immigration law. The cost in staff time alone to enforce these laws would put an undue burden on City resources. Further, the cost to the City created by the lack of trust such a policy would create is too high even to calculate.
Enforcing federal immigration law does not make our community safer. Such a policy, instead, would foster a culture of fear that would stop immigrants from reporting crime, and it would make it harder for our police officers to catch criminals and prevent crime.”

Brian Colon is a former chairman of the Democratic Party of New Mexico and ran for lieutenant governor when former Lieutenant Governor Diane Denish ran for governor against Gov. Susana Martinez

“Given the current challenges to the city’s financial resources, I am not willing to allot city resources to a program that could result in discrimination within our diverse community.
APD’s enforcement of federal immigration laws would have a chilling effect on residents’ willingness to cooperate with the police.  Our community must not fear police profiling because of their heritage. I strongly believe a person’s heritage should serve a source of pride, rather than a target for law enforcement.

It is well-documented that many people are reluctant to interact with police officers if they know that they will be viewed by immigrants as being informants. Restoring communication between officers and the public is critical to effective community policing.

We are a nation of laws which must govern and be enforced in a pragmatic way.  Under constitutional provisions, immigration law enforcement is performed by the federal government, not by local police authorities.

Finally, our community must ensure all residents are being treated fairly.  The selective enforcement of federal immigration laws by APD will likely be viewed as discriminatory and thus, another potential challenge to an already troubled department within our city. Any dialogue that suggests that immigrants are more likely to be repeat offenders is simply rhetoric and not supported by the data.

As mayor, my number one job is to create a safe city, and that starts with an effective process that takes any serious or violent offender off the streets of Albuquerque, regardless of immigration status.”

“The Albuquerque Police Department is understaffed and overloaded with citizen’s non-emergency and 911 calls for police service and protection.  With that in mind, as mayor, my priority is to protect the life and property of the citizens and visitors of Albuquerque.  My focus will be to ensure that a police officer will respond to an emergency call within 5 minutes of the initial call to 911.  As it stands, uniformed APD officers do not have the legal authority to assist in enforcement of federal laws.  Officers right now are concentrating on enforcing local ordinances and state laws, like auto theft, robbery, burglary, homicides, narcotics arrests, child abuse DWI, etc…..enforcement of these types of crimes should be a priority for our police department.”

“As a state senator from Albuquerque’s International District, I proudly championed one of the most diverse areas of the city, which included Albuquerque’s refugee village and several immigrant communities. My old senate district faces many challenges, but I do not believe our immigrant communities are part of the problem. Demonizing refugees and immigrants is not a way forward for our city, and I remain steadfastly committed to the safety and inclusion of immigrant and refugee families and their communities.

When it comes to using APD staff and resources to enforce federal immigration policy, I see many costs and no real benefits.

The costs are obvious:

We have to restore the trust between our police and the communities they serve. Making APD enforce federal immigration policy can only erode this trust even further. Immigrant communities will feel unsafe reporting crimes to police or assisting in investigations, making it even harder for APD to address our homicide and auto theft epidemics. Put simply, you cannot have actual community policing when the people are afraid to engage the police about crime. Our police department is already understaffed and overworked. Participating in the federal government’s enforcement of the President’s anti-immigration policies will only make this problem worse.

I believe we must embrace our diversity. Albuquerque has always been welcoming to immigrants and refugees, and current federal immigration policies are not going to change that part of our identity. We will continue to embrace our diversity under my administration. Furthermore, we should base our city’s brand around our authentic self – a national leader for multi-cultural communities.

Albuquerque will have to pay for APD involvement, for no clear benefit to the taxpayer. I do not believe we need to spread our city’s resources thin, or pull critical officer time needed to address violent crime to support Trump’s agenda.

Finally, as a father and husband, I do not believe it is in anyone’s best interest to spend our police officers’ time or taxpayer money breaking up immigrant families and tearing children away from their parents.

I can’t think of a single benefit that would come from forcing our local police to enforce an unjust and unnecessary federal immigration policy.
If Washington wants to enforce these broken policies, that is their jurisdiction. Albuquerque’s city hall should not help Washington tear apart our vibrant immigrant communities.”

Dan Lewis represents District 5 in the Albuquerque City Council. He was elected to the position in 2009.

“It is the responsibility of the Federal Government under the United States Constitution to secure our nation’s borders and enforce our federal laws.

Except in genuine life-threatening emergencies, city law enforcement officers and city resources should not be used in any investigations, raids, or enforcement of illegal immigration.

I believe our city has chosen a balanced approach to their serious debate between individual liberty and public safety.

Since 2011, the city of Albuquerque established an even-handed Operating Procedure involving ICE that has worked very well. That standard screening procedure applies to all people charged with a crime–regardless of race, color, background, religion, or the actual offense for which they were arrested.

At virtually no drag on Albuquerque’s resources, personnel, or funds, every person booked into the justice system undergoes the exact same screening process. No one is singled out for what would be unfair or unequal treatment.

And that is why I continue to support  that balanced approach to the understandable concerns of both sides of this debate.”

Gus Pedrotty graduated from the University of New Mexico this month with two degrees, one in chemistry and the other in psychology.

“We envision an APD that makes all communities feel safe, included, and cared for–and any vision of community policing should put forward those same tenets. Allowing APD to assist in enforcing federal immigration law in Albuquerque would be extremely costly. Doing so would further marginalize a productive and important community, dilute the focus of APD during a time of vital reform, create an environment in which racial profiling may increase, and unnecessarily burden taxpayers by confusing the duties of a local police force with those of a federal agency. The only benefits we perceive stem from a philosophy of governing and policing that we do not share.

Our undocumented communities are neither “illegal,” as they are regrettably called by some, nor they are “criminal.” Using local police to enforce federal immigration laws would further increase what is already a tense relationship between this community and APD. Members of undocumented communities attend schools, work in local industries, and pay taxes for this labor–all while facing various forms of discrimination. They are members of our community and do not deserve heightened scrutiny at the hands of APD.
APD itself faces a crossroads regarding its adherence to the consent decree it signed with the DOJ. Unnecessarily adding to APD’s responsibilities at this crucial time would not allow for full engagement with the reforms the DOJ has called for–reforms that, in the eyes of the independent monitor, are being deliberately obstructed from within the department. APD needs to be progressing away from a culture of aggression towards a culture that supports every person in Albuquerque; when every community member feels safe contacting APD to report suspicious activity or crime, we become a safer city. As such, APD needs to build trust with the citizens of Albuquerque, not further harm it by becoming immigration agents.
Finally, assisting in federal enforcement of immigration law would misallocate much needed resources from a hurting department to disrupt families, laborers, and the sense of place and power that Albuquerque needs. Our city, and so many other facets of our nation, is at an intersection that requires great introspection and empathy–we will not allow our municipal police force to step into a destructive role for which it was not designed when it needs to be working on establishing trust and protecting every member of the Albuquerque community.”

Susan Wheeler-Deichsel is a co-founder of the community group, Urban ABQ

“I see no particular benefit to allowing APD to assist in the enforcement of federal immigration law in the City of Albuquerque, except in very specific cases wherein  surface during the course of normal investigatory processes it is determined that a detainee is undocumented and has, in fact committed a crime more egregious than living in the USA as undocumented.  In those cases, it may be appropriate to refer the matter to supervisory command, who may in turn decide to refer those cases to ICE.

But I do see some very likely costs to the community if APD were to routinely assist ICE:

1.     The city would likely lose the trust of many residents in immigrant communities across the city. This loss of trust is often fragile and could easily lead to a state where immigrants would not feel safe reporting their own possible victimization to police.

2.     APD is already short-staffed and many times not able to keep abreast of their present assignments.  I have been told many times that when officers begin their shifts they already have many calls waiting to respond to.  Adding these kind of additional duties would not only be too burdensome, but could lead to declining morale among officers who are often already feeling over taxed.”

View all Dukes Up Albuquerque articles →