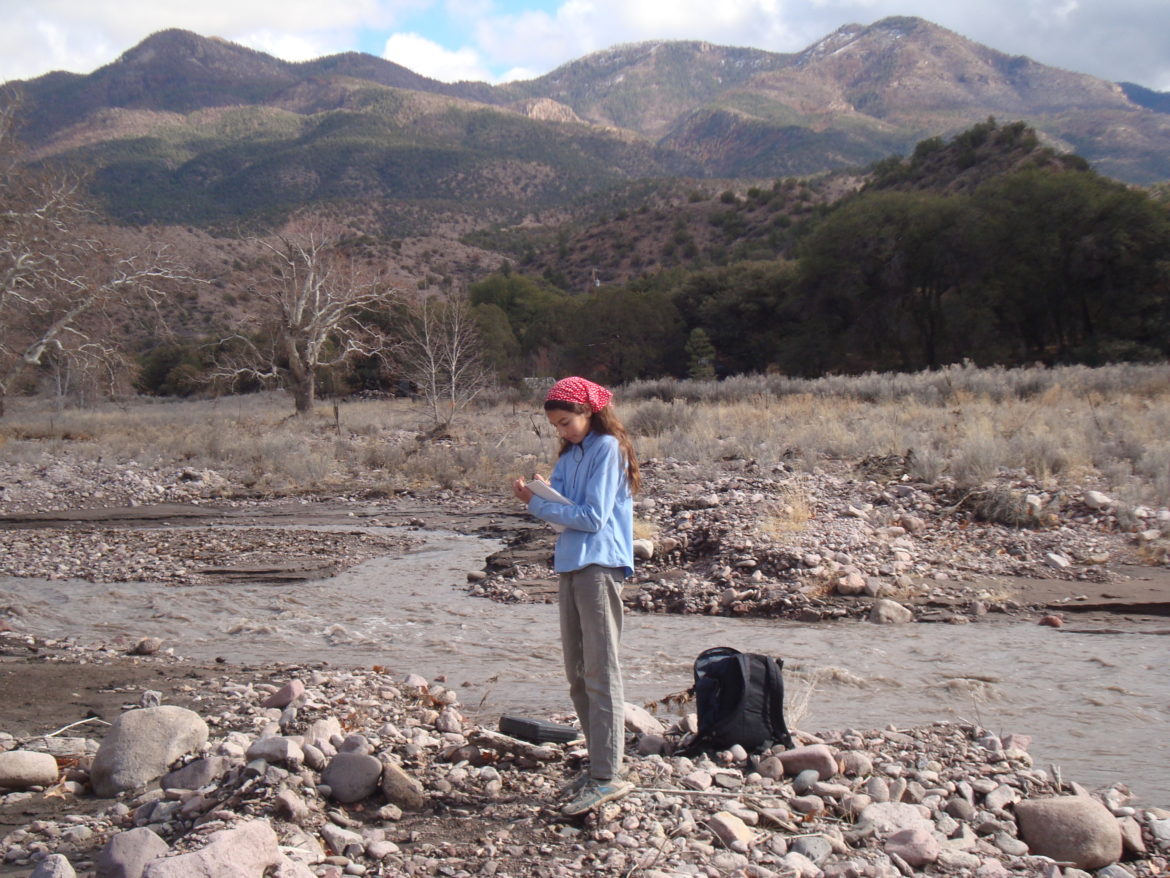 This Sunday, people gathered at a spot along the Gila River in southwestern New Mexico to nurture a small habitat restoration project and remember three Silver City teens who died in a plane crash three years ago. The mission of the Butterfly Way, located at The Nature Conservancy’s Gila River Farm, is to enhance the river corridor with native flowers, trees and milkweed that will benefit pollinators, including monarch butterflies.

“It’s sort of a community effort to beautify a piece of the floodplain that had been highly hammered and damaged over time by different agricultural land uses,” said Patrice Mutchnick, mother of Ella Jaz Kirk. “We started planting pretty quickly after the kids passed. We drew up a five-year plan how to restore this area, and are using the monarch as the cornerstone of the project.”

At first, it was just family members, but over time, Mutchnick said they’ve invited more neighbors and friends, student groups and community members, to come to the farm.

“We always talked about creating beauty in their honor, restoring the Earth in their honor,” she said. “And we broadened it, trying to bring people out this weekend to put their hands in the earth, restore a place and enjoy the river.”

The Gila River was special to the three teens, including Kirk. Weeks before her death, the 14-year old testified before the Senate Conservation Committee in support of a bill that would have required New Mexico to consider alternatives to building a diversion on the Gila River. She also delivered a petition with 6,000 signatures to the office of Gov. Susana Martinez which asked the governor to support a non-diversion alternative. During Kirk’s meeting with staff, she pointed out that the federal subsidy for the project wouldn’t cover the full price of the diversion. She also said the project would harm the river and the wildlife that depend upon it.

“People tell me a lot when I advocate for the river, that I don’t understand. That I don’t understand how politics work….that people need water and that’s the paramount need,” she said during that meeting. “I do understand that. I understand that when it comes down to it we want to provide water for our families and communities and that’s the need we’ll always come back to because that’s the most important thing.” But she argued for other ways to provide for communities’ waters needs than building a diversion.

That bill didn’t pass, and later that year, the New Mexico Interstate Stream Commission voted to pursue a diversion on the Gila River.The teen’s words were prescient: despite spending more than $11 million on contractors, engineers and attorneys since then, the state still doesn’t have a plan for the diversion, which is likely to cost far more than the estimated $90 million in federal money New Mexico anticipates receiving.

Three years ago, high school sophomores Kirk and her friends, Michael Mahl and Ella Myers, were killed in a single-engine plane crash while doing ecological monitoring as part of a school project at Silver City’s Aldo Leopold Charter School.

A pilot had volunteered to fly the three teens over Signal Peak, where a fire burned in the Gila National Forest. Peter Hochla, a psychiatrist based in Albuquerque, would fly his Beechcraft Bonanza to Silver City when working with Veterans Administration patients there. On the afternoon of May 23, 2014, Hochla and the three students took off from Whiskey Creek Airport. It was overcast and gusty. According to the state report, witnesses said the plane returned to the runway about 10 minutes after takeoff and Hochla tried to land. Cross-winds were strong and Hochla erred, attempting a steep descent to the runway. Bouncing and moving back and forth, it appeared that Hochla tried to lift off again. Without enough lift, however, the plane crashed at a nearby trailer park, just out of sight of the airport.

The families of the students sued the school for its role in the accident. Eventually, they reached a financial settlement. The parents also asked school officials to take a closer look at their safety practices, publicly acknowledge the school’s role in the teens’ deaths and hold an information session for the staff, faculty and the governing council concerning the accident. The settlement also called for an independent risk assessment evaluating the school’s decision-making process and practices for experiential education, like the ecological monitoring project.

At the time of the settlement, Mutchnick said in a statement that the families wanted to help the school understand the chain of events leading up to the accident.

“Where were the checks and balances that should have prevented the teacher from putting the children on a plane with a non-commercial pilot in such bad weather?” Mutchnick asked. “We hoped the school could take responsibility for their actions leading up to the crash, so they could learn from their mistakes and take steps to make sure this kind of thing never happens again.”

Last year, Mutchnick spoke about how the death of the three teens affected a small town like Silver City and said she was grateful for the outpouring of love. But she was baffled why the state agency that oversees charter schools didn’t investigate the plane crash, especially during its charter renewal process later that year.

Inspection of Public Records Act requests with the state’s Public Education Department filed by this reporter in 2016 yielded no documents indicating investigations or reviews into the incident.

Filing and then struggling through the lawsuit was difficult, says Mutchnick. But she and the families affected wanted to create positive changes within the school and the community. “We as parents took it on ourselves during our settlement to create conditions the school had to agree to to require and encourage them to create some change,” she said. “That’s why we had them do that risk report, get an outside person to come and evaluate problems and keep pressure on them to do some of those changes.”

Along with working on the Butterfly Way, Mutchnick is also raising money for a film, “Heart of the Gila,” focused on protecting the river. She wants to elevate the conversation about the Gila and help people understand the river’s importance. “We’re trying to keep doing things for our kids and the kinds of things they would be doing,” she said.