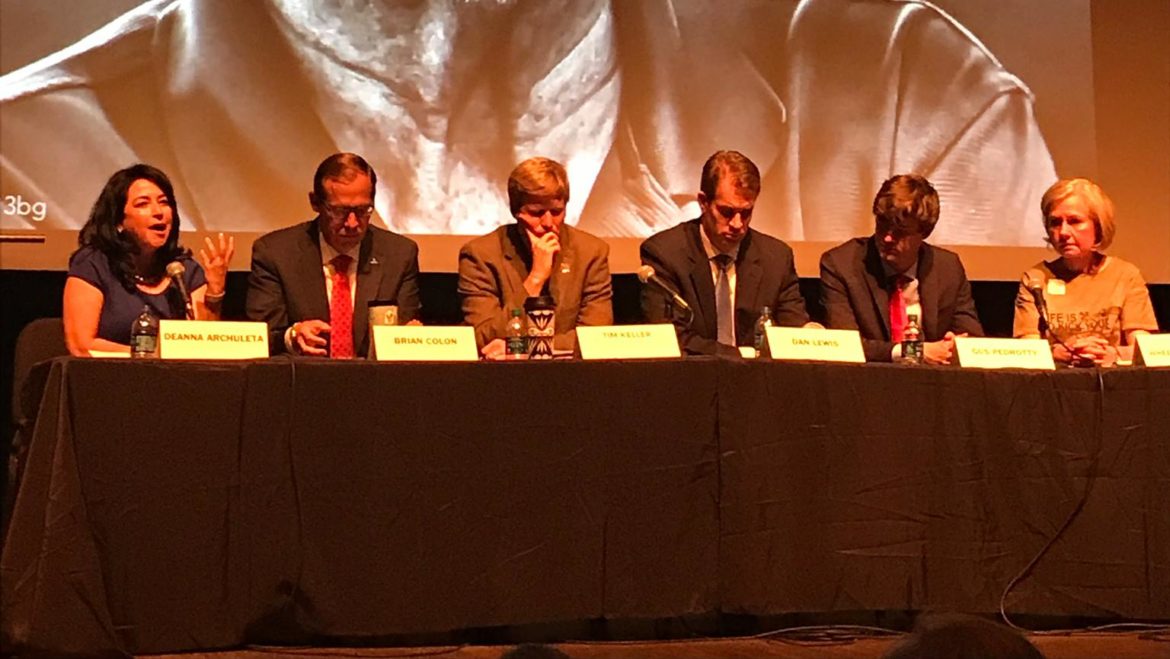 Candidates at the Dukes Up Real Talk Albuquerque Mayoral Forum at the National Hispanic Cultural Center in May.

Six Albuquerque mayoral candidates faced off Tuesday evening in one of the the first forums of the campaign and answered questions on a wide range of issues like community policing, immigration and economic development.

While there were many nuanced differences in the candidates’ answers, they also agreed on a number of issues.

During a “lightning round” of yes or no questions in front of an audience of 250 people, all candidates agreed that the Albuquerque Police Department wasn’t doing enough to meet the Department of Justice consent decree and that the department’s chief, Gorden Eden, should be replaced.

Each candidate also said they would support relocating Syrian refugees to Albuquerque.

The forum was sponsored by the community group Dukes Up Albuquerque and the two moderators were from the Weekly Alibi and NM Political Report, which helped organize the event.

Dan Lewis, a current city councilor, made fighting crime a common theme and said the city should have 1,200 police officers. APD currently staffs about 840 officers. Lewis also lamented the recently passed city budget, which he voted against, for making some future public safety spending contingent on money the city will have while not putting the same requirement on other departments.

“I will make a budget with the priority of tackling crime in the city,” Lewis said.

Deanna Archuleta, a former Bernalillo County commissioner, advocated for putting police officers in schools as one way to build trust between APD and the community.

“Officers need to work both the day and night shifts,” she said, as opposed to being limited to just one of those shifts. “When families are out playing in the park, you get to know the community members.”

Tim Keller, the current state auditor and former state senator, noted that while the city has a police oversight board, that board actually doesn’t have the power to make decisions. Keller called on the board to “have teeth.”

“To make them in the first place an advisory body I think was disingenuous,” he said, emphasizing that APD can ignore their recommendations.

Augustus “Gus” Pedrotty, a 22-year-old University of New Mexico college graduate new to politics, lamented how APD, in its approach to the DOJ consent decree, hasn’t included any policy changes to things like proper neck-holds to use when restraining people.

“These are the same moves that cost Eric Garner his life in New York,” Pedrotty said, referring to the infamous 2014 death at the hand of New York City officers captured on a cell phone video. “Without these simple policies, we fail to protect our communities.”

Colón’s most animated moment came when he and other candidates were asked to make a pitch to imaginary investors thinking about opening business in Albuquerque. In his answer, he talked about a hypothetical Colón administration that “just made a recommitted effort to build a safe city and a smart city.”

“Our budget now reflects our values. We’re investing now in the law enforcement department and in public safety in a way we never have before,” he said of the future with Colón as mayor. “Our land values are affordable, the people are ready, willing and able, and if you don’t get in today you’re not going to get in tomorrow, because you won’t be able to afford it.”

“We are present and we are virginal in a certain sense in terms of our capabilities,” she said.

Keller focused on his track record in public office to make policy changes. He proposed using part of the city’s permanent fund, which he said has $900 million, as a potential area to draw money to fight poverty.

“I’ve heard a lot of talking points,” he said. “I’m running for mayor because I actually want to change things.”

On immigration, Archuleta recommended all city buildings be “sanctuary spaces” that federal law enforcement can’t use to crackdown on undocumented immigrants. She cited recent ICE arrests at the city’s metro courthouse as examples of something that wouldn’t be allowed under her administration.

Absent from the forum were Michelle Garcia Holmes, who told NM Political Report she had a conflicting event and Ricardo Chaves, who did not answer the qualifying question. Bernalillo County Commissioner Wayne Johnson said he was unable to attend because of a County Commission meeting.