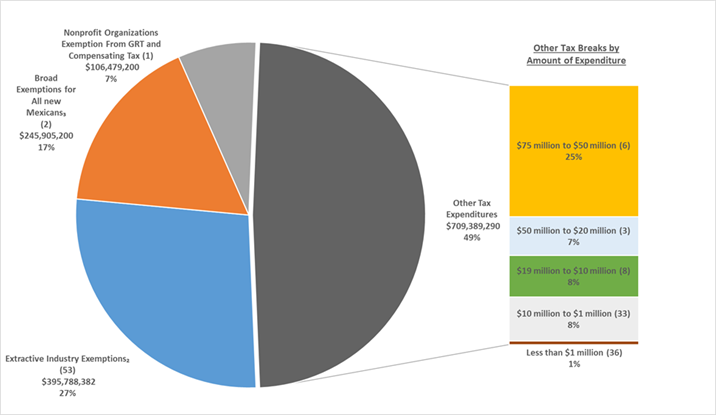 Tax exemptions for a range of extractive industries, such as mining and drilling, comprises 27 percent of all tax breaks and total nearly $400 million.

Compiled by the Office of the State Auditor, the data came from the New Mexico Tax and Revenue Department. But finding it was not easy.

According to Keller’s letter, “the OSA was faced with a lack of transparency on tax break data that stems in part from the Taxpayer Protection Act”:

For example, in the uranium industry, little information was shared because fewer than three taxpayers avail themselves of these tax breaks. The OSA relied on [Legislative Finance Committee] data for the uranium hexafluoride deduction, but we have on other data for the uranium industry. The Legislature should consider whether the beneficiaries of such generous tax incentives should provide appropriate exemptions to some of their privacy rights so that the public can assess whether those programs are working.

Keller’s office also recommended the state undertake a “thoughtful examination of tax programs and their relative returns on investment.” That is a “best practice” followed by most states and “strongly recommended” by the U.S. Government Accountability Office.

The letter closes by determining that New Mexico is at risk with respect to its bond rating, audit findings and other issues if a budget for higher education and the Legislative branch is not passed and signed by the governor before June 22, 2017.

Correction: There was a typo in the original version. The tax exemption for extractive industries totals nearly $400 million.