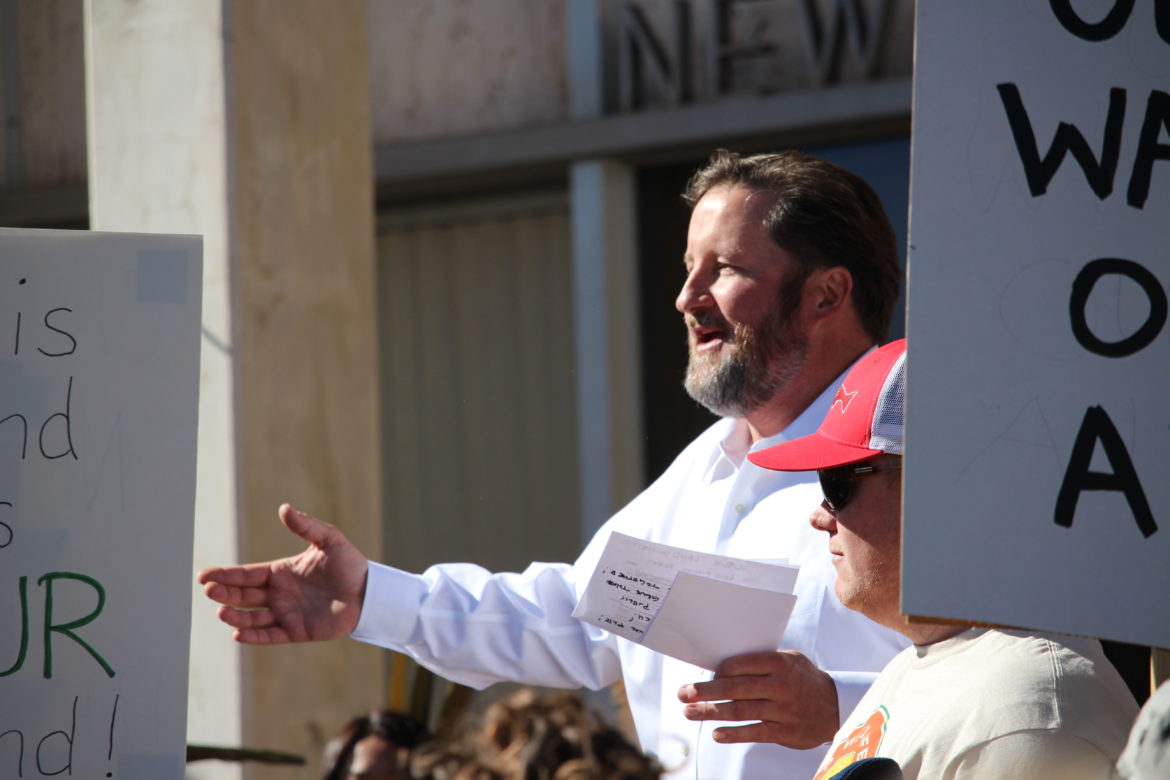 “We are in a state of crisis in New Mexico, and I think it’s important to acknowledge that,” said VeneKlasen. He is currently executive director of the New Mexico Wildlife Federation, which represents sportsmen and women across the state and is focused on the conservation of water, lands and wildlife. “I was tired of wringing my hands and complaining about how things are run in that office, and I have some really good and visionary new ideas.”

The State Land Office administers 9 million acres of surface lands and 13 million acres of subsurface mineral rights. Those lands are managed for beneficiaries of the state land trust, which include schools, universities and hospitals. Aubrey Dunn, a Republican, is the incumbent and can run for a second term next year.

“I’m a father, of an 11-year old girl, and I want her to inherit a state that we are proud of, that is flourishing,” VeneKlasen said. “One of the saddest things is we miss so many opportunities. One of the biggest opportunities is renewable development: we are the second sunniest state in the union, and yet we rank 48th in renewable development and that is just a tragedy.”

VeneKlasen added that “we’re at a paradigm-shifting moment in New Mexico,” which will require “aggressive and progressive leadership and teamwork.” If elected land commissioner, he said he would continue to work with the oil and gas industry and grazing leasees, and would also aggressively pursue renewable energy projects.

“The other thing that needs to happen in that office is, transparency and accountability have to be mandated,” he said.

“It is the halls of darkness. In order for New Mexican citizenry to find out what is going on in that office you have to IPRA them,” VeneKlasen said, referring to the state’s open records law, the Inspection of Public Records Act. “New Mexico citizens, day to day, should know what’s happening there. That transparency needs to happen real time. With the the internet, people should be able to log on to the State Land Office and know exactly what leases are being made, what is going on…what negotiations are going on.”

The land is held in trust for the people of New Mexico, he said, and managed to benefit schools, universities and hospitals, “This belongs to the people and the people should know who is managing this office and these resources for their future,” he said.

VeneKlasen is the second Democratic candidate to join the race so far. Former land commissioner Ray Powell announced his candidacy in March.

Following VeneKlasen’s announcement in downtown Albuquerque, NM Political Report had some follow-up questions. This is an edited and condensed excerpt of that conversation.

NMPR: You’ve been coming at the state agencies as an activist. As land commissioner how will you work within the structures that already exist, and with industry, other activists, and other agencies?

VeneKlasen: I had sort of an epiphany, as someone who was trying to affect change from the outside.The way we fast-track change is from the inside, through an elected position.

I work in the legislative arena now. There are special interests, industry, nonprofit organizations, individual entries, are all working together in that arena. That is my background: trying to find pragmatic solutions.

We’re one of the most complicated states in terms of who our stakeholders are. We have a diverse Hispanic and Latino community, an incredible tribal community, varying degrees of environmental interests and industry interests. It is a very complicated and nuanced world we live in here in New Mexico. I’m a born and raised New Mexican, and I know what these nuances are. I know the stakeholders individually, and I think I can work between these interests to find new and evolutionary solutions to those problems

NMPR: The role of the State Land Office is to manage state lands, but how do you plan to incorporate tribal interests and more diverse voices into how those lands are managed?

VeneKlasen: If you look on the State Land Office webpage now, the interests that are highlighted are oil and gas and the grazing community. Obviously, they’re a cornerstone of the leaseholders that run that office. But you don’t have the broader range of stakeholders. Sportsmen are another important leaseholder, and they’re never mentioned. You don’t see cultural representation in a public process and a decision-making process. There’s an advisory board, but it’s kind of a kangaroo court. I want to see those interests at the table with advisory board so we have tribal representation, and so that we have northern and southern Latino and Hispanic representation.  We need to diversify that stakeholder board so we’re making decisions based on all those different interests.

NMPR: On the State Land Office’s homepage, there’s a note that says, “State Trust Lands are often misunderstood in terms of both their character and their management. They are not public lands, but are instead the subject of a public trust created to support the education of New Mexico’s children.” Can you talk about that?

When you look at state trust lands in Arizona, those are open to the public and they are used for camping and outdoor recreation. We’ve missed the boat for state trust lands for outdoor recreation. Why are we not using heirloom properties like White’s Peak [in Colfax County] near Des Moines, New Mexico? Why are we not opening these up to the public and charging camping and entrance fees? It’s another lost opportunity. I think we can reasonably start to use some of these heirloom properties and the state can make money on them and our schools can benefit from their recreational uses.

Obviously, oil and gas and grazing were the foundation for that money-generating resource. But they’re not the only ones. We need to start thinking differently.

NMPR: What about the impacts of oil and gas drilling and the inability of the state to hold companies financially responsibility for spills or accidents? Do you have ideas on how the state could stop having to spend its own money on cleanup?

VeneKlasen: I’m a conservationist. I’m very conscious of making sure that industry is a responsible partner. Industry should not abuse a leaseholder privilege, and they have to have mandated responsibility for use of that resource.

We are so antiquated in our approach to how we work with industry. Oftentimes, we see land commissioners that work for industry. I’m going to work with industry. And hold them accountable. That doesn’t mean their bottom line is going to be impacted so much that they’re not going to work with the State Land Office. But it does mean when they do have negative impacts that they are responsible, so that somebody else isn’t paying for their environmental mistakes.

The mandate of that office is stewardship of those lands, along with the mandate to make money for those institutions.

We need to change that culture. That doesn’t mean it’s going to kill industry. But it will hold them accountable and it will raise their standards, so they’re operating in a conservation-minded way.

NMPR: Currently, the State Land Office is actually one of the few state agencies where leadership is made available to the press and answers questions. You raised the issue of “real time transparency.” Can you talk about that in terms of what the public needs to know, but also how your office will approach working with the press. Will you be available, and will your staff be available, to reporters?

VeneKlasen:  The whole idea of civil service is such a sacred thing to me. I am a servant of the people. I want to be available to anybody who comes into that office. I’m the responsible person for stewarding and managing those resources. I can’t be an exclusive person.

The press has to have access to me all the time. They have to know exactly what I, in that office, am doing real time. With the internet, we can do that. Hundreds of leases are being negotiated and that information must be made available.