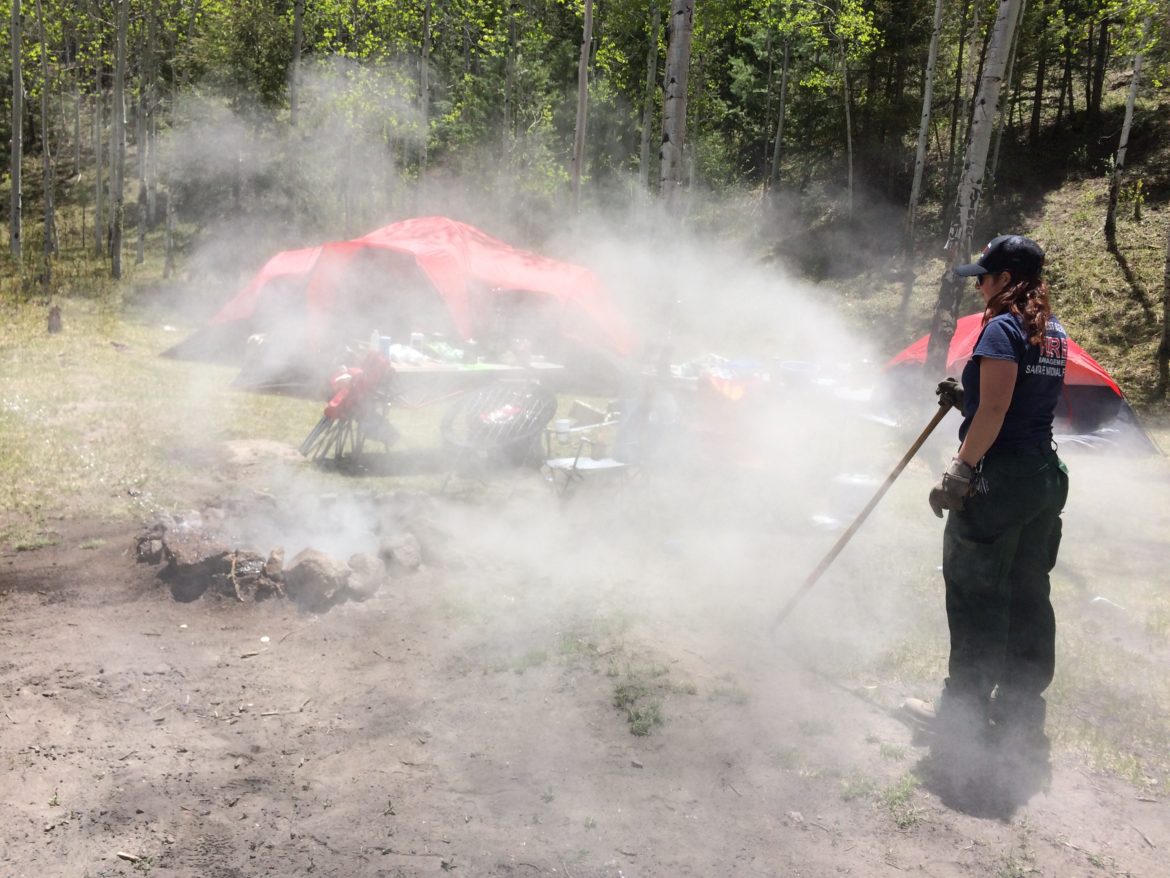 While thousands of people poured into the mountains to enjoy the three-day weekend, federal employees hustled around the forests, trying to keep visitors safe, protect special areas and prevent wildfires.

It’s not an easy job. Like many public lands, national forests in New Mexico and across the country have experienced a jump in visitors in recent years.

Fire Protection Officer Ron Gallegos has worked full-time for the U.S Forest Service for 37 years. Just shy of 60 years old, he grew up spending time in the area where he now works, the Jemez District of the Santa Fe National Forest, and fishing the Rio Cebolla.

“In the ‘60s, 70s, you’d be lucky to see one other person out here. Today, every year, the numbers increase more and more,” he says. “It used to be such a pristine area.”

The overuse and abuse of the forest, he says, “is just so heartbreaking to see.”

In addition, the Jemez Mountains have been especially vulnerable to wildfires in the past two decades—and it’s easy for campfires to burn out of control.

Over Memorial Day weekend, Gallegos and Zsuzsanna Gooris, a fire prevention tech and wildland firefighter, patrolled the district, looking for abandoned campfires. Along the way, they also came across unsafe or illegal off-road vehicle use, belligerent visitors, people driving in off-limits areas or camped where they shouldn’t be and even people shooting guns too close to camp sites.

Currently, there are four fire protection officers for the nearly 240,000-acre Jemez district. For the three-day weekend, two law enforcement officers and an extra fire crew from the Grand Canyon joined them.

They all have their hands full.

A day in the life

Gallegos and Gooris begin Sunday by turning down Forest Road 376, a popular recreation area. To keep people from dumping their trash in the forest, the district set up two large dumpsters at the intersection of NM Highway 126 and Forest Road 376. But by Sunday morning, the dumpsters are already overflowing. “We still have two more days to go,” Gallegos says.

By Sunday morning, the dumpsters at the intersection of NM 126 and FR 376 were overflowing.

Trucks and cars barrel down the gravel road, kicking up plumes of dust and making it nearly impossible to see oncoming traffic. More than once, we pull to the side of the road while five, six, seven trucks stream past. Gallegos estimates that over the three-day weekend, about 2,000 people will visit the Jemez.

It doesn’t take long for Gallegos and Gooris to find an abandoned campfire.

Within minutes of turning south onto 376, Gooris hops out of the truck and examines a smoking fire pit. It’s filled with trash, including aluminum foil, glass and plastic bottles.

“Don’t ever put bottles and plastic in a fire ring,” Gallegos says, wondering why people would sit around a carcinogenic campfire.

Gooris points to a small wet spot in the ash, where it looks like a man probably urinated onto the fire. That’s how the Dome Fire started in 1996—two German tourists thought they’d extinguished their campfire after urinating on it. That abandoned fire ring sparked a wildfire that burned more than 16,000 acres of the Jemez.

Related story: The Heart of Darkness

Gallegos cranks up the engine on the 55-gallon tank of water in the back of the truck, aiming the hose at the smoldering mess while Gooris rakes deeper and deeper into it. At a minimum, he says, it takes five to 10 gallons of water to fully extinguish a campfire this size.

The two pull trash from the pit, careful not to rip the bags with broken glass. “People are trashing out our forests quicker than we can clean it up,” Gallegos says. “We’ll have to come back on Monday for the rest of this.”

A father and daughter who had seen smoke earlier have come over to check on the fire ring. The man’s holding a small plastic water bottle. “We want to come back next year, we don’t want it all burned down,” he says. “I’ve got kids, and I want this place to be here for them and their kids.”

From there, Gallegos and Gooris continue south down the forest road, which is packed with campers.

Some of the sites include couples and small families. But there are also large gatherings, with multiple trucks, cars and off-road vehicles parked around clusters of tents. There are jury-rigged outhouses—tarps hung between trees for privacy or small, specially designed tents with open bottoms. Often, Gooris points out, people leave behind their outhouse waste buckets.

RVs and trailers are tucked back in the trees, and it’s hard to imagine how drivers navigated the behemoths down the narrow, newly-blazed roads. One open area resembles a festival more than a weekend camping escape. There are tents and flags, and people have parked their RVs in a tight circle, like a covered wagon caravan.

Driving past one group of visitors, Gallegos spots an unsafe campfire. It lacks a proper stone ring, duff and debris haven’t been cleared away and the logs are too long. He has an easy, patient way about him and speaks calmly with the two young men, one of whom becomes increasingly agitated and defensive, saying that he knows how to build a campfire and repeating “What do you want me to do?”

Gallegos stands his ground, yet manages to defuse the situation. The agitated man eventually apologizes. Later, when driving by again, Gallegos peers out the window and sees they’ve taken his advice to make the campfire safe. He doesn’t have to cite them. And maybe just as importantly, the campers raise their arms and wave as the fire truck passes.

After stopping to extinguish another smoking campfire—this one hasn’t been abandoned completely, but the campers aren’t present—Gooris hears gunshots. Firearms are allowed, but it’s illegal to shoot them within 150 yards of a campsite, road, structure or body of water.

Winding through the aspens, they eventually spot a man on the hillside with a shotgun. He’s definitely within 150 yards of campsites. Gallegos grabs his handheld radio and walks up the hillside. Meanwhile, Gooris listens to a call about a blue Chevy stuck in a mud bog about two miles away. A group of young men have driven a pickup truck off-road, into an area restricted to motor vehicles, and gotten stuck.

When Gallegos returns to the truck, he explains that Fire Protection Officers aren’t law enforcement officers. They aren’t armed, and they can’t issue citations for anything other than campfire violations. “We’re just fire protection officers, we do the best we can. We don’t want to get hurt out here,” he said. “I try to see if there’s any booze [before walking up on people with guns]. If there’s any booze, I’m not going to go near those.”

En route to the stuck vehicle, Gallegos retrieves a trash bag from the middle of the road. He also waves at some little kids playing next to their campsite.

Up ahead is the commotion: About 100 feet off the road, the blue truck is stuck in a meadow, with mud almost up to its bumper. A small crowd watches and a law enforcement officer has already issued the driver citations. One of the young men starts yelling at the fire crews, including Gallegos, Gooris and the Grand Canyon crew. “If you’re not going to help us, just leave! Pendejos! You too, pendeja.”

Another truck comes along to tow out the Chevy. When it breaks free from the mud, the same man who yelled flips both middle fingers to the Forest Service crews.

A bystander muses, “Who flips off firefighters?”

Gallegos shakes his head at the whole situation and points out that due to the damage from the truck, that spot in the meadow will take years to recover.

From there, it’s back to looking for abandoned campfires. One empty camp has two that Gallegos, Gooris and the Grand Canyon crew take care of—a large fire ring and a smaller cooking area next to a tent. Both are still hot. One is even still smoldering.

Despite rules prohibiting vehicles from being more than 30 feet off the road, people have skirted or moved barriers and signs, created a maze of unauthorized new roads and pull-offs and even parked their vehicles right next to streams. One group has driven up off the road, creating a new track. These sorts of illegal pull-offs are common throughout the district. Once one person drives off the road, Gallegos says, future campers see the tire tracks and think it’s a viable camp spot.

In this particular case, the group has set up their camp—tents, fire pit, stove and parked vehicle—in the middle of an archaeological site.

“These guys need some education,” he says, leaving a pamphlet and taking photos of the site. “They’ve basically created a new campsite right in the middle of an archy site.”

More than anything, this job is about building relationships. Gallegos wants people to have fun and be safe, and he really wants them to understand how they affect one another and the forest.

Gallegos frequently stops to talk with visitors, handing out his “campfire commandments” which show how to properly build and extinguish campfires. He also fields questions from drivers who flag him down, asking for directions or pointing out problems they’ve seen.

When Gallegos and Gooris notice people have driven past the barriers, Gallegos does most of the talking, and he’s unfailingly patient and calm with campers.

At the end of the day, when it’s time to head back to the ranger district office so all the crews can meet for a debriefing, Gallegos admits he’s exhausted from everything they’ve seen.  And Monday will be even busier. “Tomorrow will be an intense day,” he says. “Everybody will be gone and we will be checking out every little ring.”

Then, on the way out, he spots a family camping alongside the river. They’ve driven their truck past the barriers and are about to build a fire and cook dinner.

Gallegos seems discouraged by all that he’s seen today. But he pulls over and grabs a frisbee and some Smokey Bear stickers from a roll in the backseat. Walking past the barrier, he approaches the kids with a smile. “What are you guys doing?” he asks, while they look back and forth between him and the fire truck, rapt. Only after chatting for a few minutes does he point to the barriers. The little boys run off to toss the frisbee and he talks to the dad.

He explains about the barriers and suggests a better place to build their campfire than alongside the river, which becomes polluted with ash and waste. Pointing to a nearby pile of toilet paper, he says he knows that doesn’t belong to the people who just arrived—and reminds them to leave the forest a better place than they found it.

Then he waves one last time at the boys, and heads back to the truck.

Things you should know:

-The Santa Fe National Forest has an updated Travel Management Plan, which explains where motorized vehicles are and aren’t allowed. You can find information online or pick up a map at any of the ranger district stations.

-Make sure you bring 3 to 5 gallons of water to extinguish your campfire, and never leave a fire unattended. For more tips on campfire safety, visit this site or call the Santa Fe National Forest Fire Info Hotline: (877) 971-FIRE (3473)