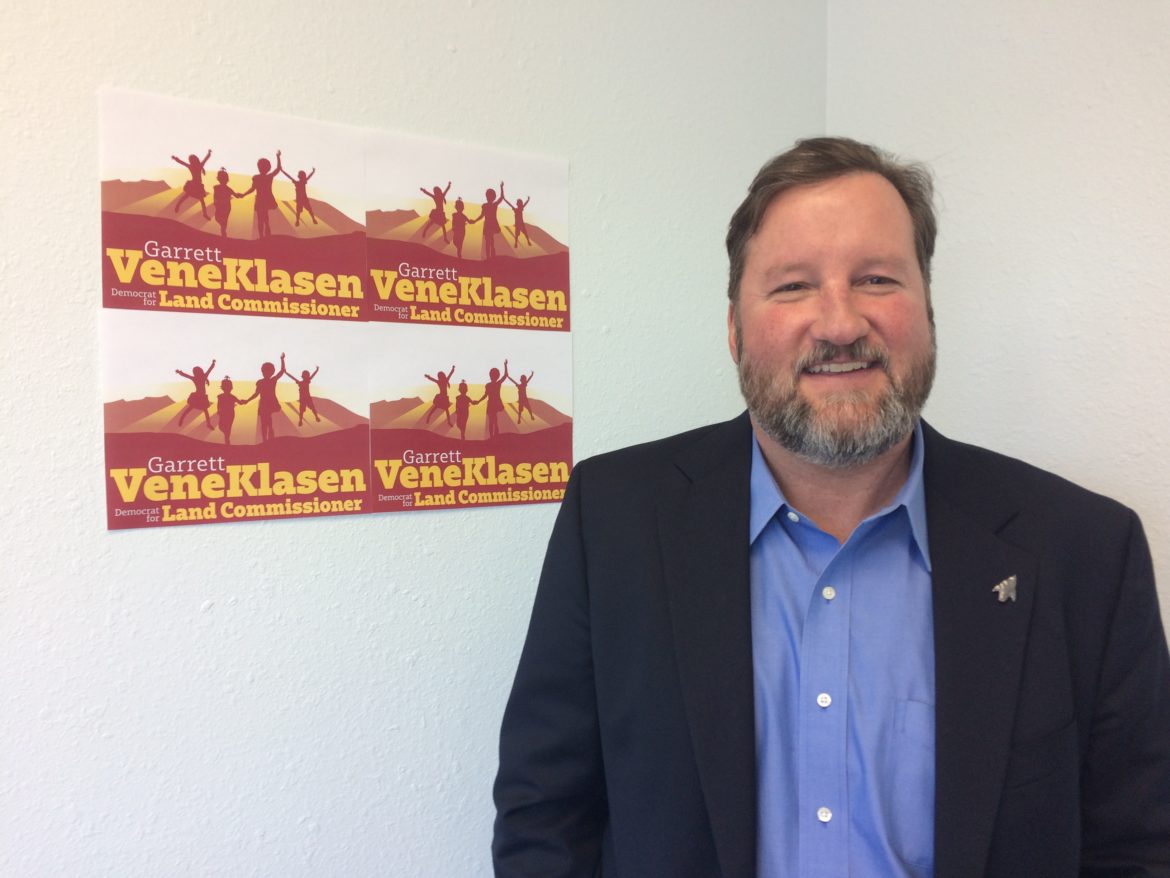 The order came from Dunn’s son, Blair, an attorney who ran unsuccessfully for the state Senate as a Republican last fall and helped run Gary Johnson’s last gubernatorial campaign.

Blair Dunn sent the order to the New Mexico Wildlife Federation, of which VeneKlasen is the executive director, and eight media outlets including NM Political Report.

The order called political statements made by VeneKlasen, a Democrat, untrue and misleading.

It references a radio ad from VeneKlasen’s campaign accusing Aubrey Dunn of using the office for personal gain.

“Our current land commissioner bought a ranch for himself,” VeneKlasen said in the ad. “Normally that’s not a problem but as commissioner, he negotiated a deal to run a billion dollar power line, not only through state trust land but through his personal ranch property.”

In the order, Blair Dunn warned VeneKlasen and any organization not to publish “dishonest defamatory statements” against the commissioner.

The younger Dunn told NM Political Report his parents are mostly concerned with the public perception that any of their actions were sneaky or nefarious.

“The issue isn’t that they may make money off the easement,” Blair Dunn said. “The issue is that Garrett is falsely saying that Dad had a hand in this and he was self-dealing and that he’s corrupt.”

According to the letter, Aubrey Dunn and his wife bought the ranch before a final decision had been made on the SunZia power line by the previous two land commissioners and the U.S. Bureau of Land Management, and they had no input into the transmission line’s route.

The SunZia Southwest Transmission Project will include substations and more than 500 miles of transmission lines to move electricity, including from renewable sources, from Lincoln County, New Mexico to Pinal County, Arizona.

According to the order, the Land Commissioner will sue VeneKlasen if he continues to “make false statements with the intent to harm the reputation of Aubrey Dunn.”

It also says, “if you persist in engaging in your defamatory conduct in a malicious effort to lie to the public we will pursue injunctive relief and damages against you personally and any organization that republishes your dishonest statements.”

Blair Dunn told NM Political Report he didn’t intend to include news outlets in his letter, but instead special interest groups like the state Democratic Party or the New Mexico Wildlife Federation.

VeneKlasen appeared unfazed by the order, doubling down on his previous statements.

“It sure looks like Self-Dealing Aubrey Dunn doesn’t like being exposed,” VeneKlasen wrote in an email. “Dunn’s frivolous lawsuit won’t change the fact that he stands to personally benefit from these dealings. It’s wrong.”

VeneKlasen’s attorney sent a reply to Dunn on Friday, asserting that all VeneKlasen’s statements are “supported by publically available material”:

Given that the United States Supreme Court recognizes that ‘debate on public issues should be uninhibited, robust and wide-open,’ we believe that while the statements may be uncomfortable for Land Commissioner Dunn, there is no defamation here.

Speaking on Sunday, VeneKlasen told NM Political Report that to his knowledge the Dunns have not filed a suit against him; he said he wouldn’t know until Monday if they are filing a restraining order.

Blair Dunn said he plans to file a temporary restraining order and a preliminary injunction early this week since VeneKlasen ultimately refused to remove the ad.

“It’s not like it’s something new, or something I’m exposing for the first time. This is an old story. But there were never any answers to those old questions in the old story,” he said of Aubrey Dunn’s purchase of the Gran Quivira Ranch in 2014. “Maybe he hasn’t made money on this easement through his ranch, but the question is, ‘Will he make money on this?’ and it’s important for him to be forthright about it.”

VeneKlasen said the order has only deepened his interest in running for State Land Commissioner.

“That’s one of the reason I’m running, because I’m so frustrated with [the office’s] opaqueness, regardless of who was land commissioner, and that needs to change,” he said, and questioned how many other “self-dealings and crony land deals have happened since 1912. Hundreds? Thousands? We’ll never know.”

On a national stage, he said, policies of stewardship, renewable energy and even freedom of the press are going backwards in the United States.

Speaking on behalf of his father, Blair Dunn said the lawsuit is not necessarily indicative of another run for land commissioner.

“There is life after politics and saying things like that hurt not only Dad’s political figure, but he’s a businessman,” Blair Dunn said.