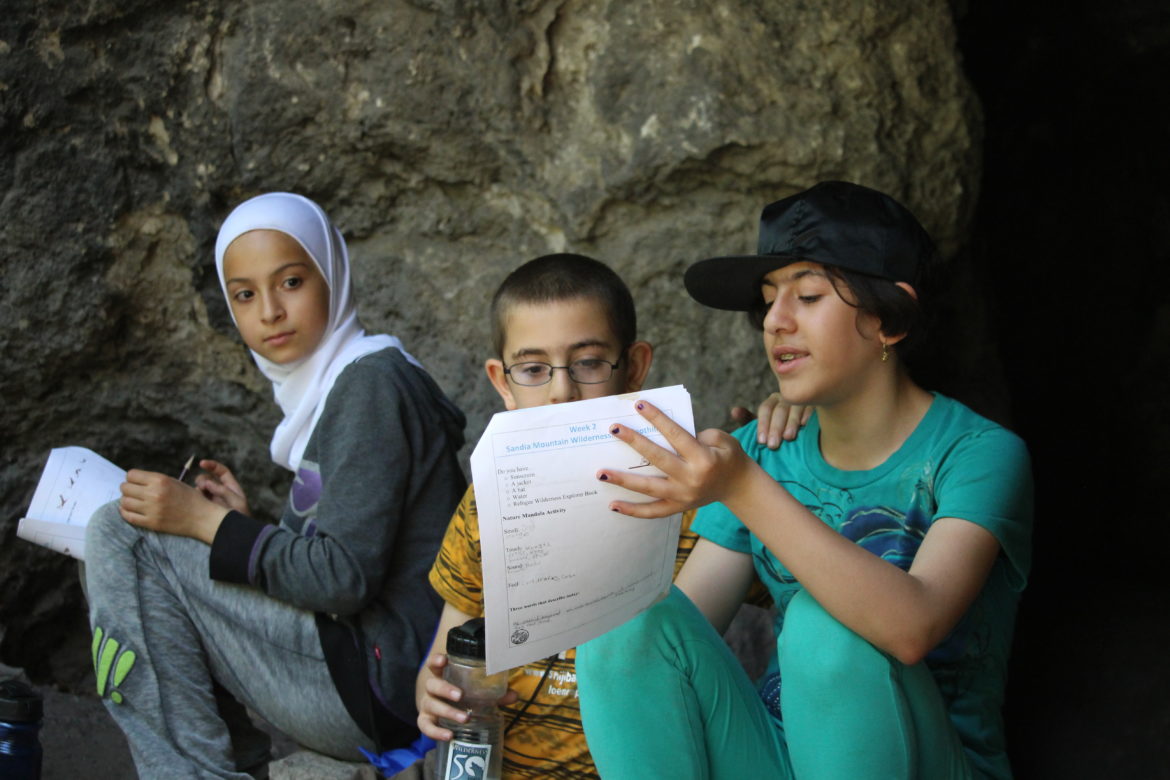 Smatterings of conversations in English, Arabic, Caldean and Dari punctuate the calls of Steller’s jays and Bewick’s wrens on a trail in the Sandia Mountain Wilderness.

Six kids, ranging in age from seven to 16, hike up the Crest Trail with three young women from the New Mexico Wilderness Alliance and Catholic Charities’ Refugee Mentoring Program. The childrens’ families have relocated to Albuquerque after being forced to leave their home countries, and the kids are here as part of the Refugee Wilderness Explorers Summer Camp.

Rather than introducing themselves by their country of origin, the children name the languages they speak: Arabic, Caldean, Urdu and Dari are the predominant languages, and some of the kids also know Spanish or French in addition to English.

Sixteen-year-old Ghulam-Ali speaks five languages, and he takes a takes a crack at reading the field guide entry for “banana yucca.” The pokey plant grows on rocky slopes, blooming in June and July. Its leaves can be used to make soap. The rest of the kids peer over at the plant, then keep traipsing along the trail. They point out butterflies and wildflowers, lizards and a damsel fly.

Endion Schichtel of the New Mexico Wilderness Alliance explains that the camp was designed to encourage an appreciation for wilderness and help new families develop a sense of place in their new home.

The nation’s first designated wilderness area is the Gila Wilderness in southwestern New Mexico. It was protected from human development in 1924, four decades before Congress passed The Wilderness Act, which was passed “to assure that an increasing population, accompanied by expanding settlement and growing mechanization, does not occupy and modify all areas within the United States and its possessions, leaving no lands designated for preservation and protection in their natural condition.”

Since they started coming out, Schichtel has seen a change in the children. At first, they were shy and clustered together. Now they laugh, pointing things out on their own. They are finding their footing, so to speak.

Under the shade of a ponderosa tree alongside a dry, rocky streambed, the six kids eat their lunches. They’re shy around a reporter asking questions, but eventually talk about what they’ve seen on their excursions to the wilderness this month. They mention lizards and a dragonfly. Eleven-year-old Ghadir, who is quick and bright and keeps close watch over her seven-year-old brother, says they once saw four deer on their drive home. Ten-year-old Mursal’s eyes light up when Schichtel mentions wild horses live at the far north end of the mountains.

Danielle Hernández is the mentoring program coordinator for Catholic Charities’ Center for Refugee Support. The refugee wilderness camp is just one of the extended services in their program, she says.

“The summer camps and after school programs we offer, while very helpful for the children, are meant to supplement the help that the children will get from their mentors, once they are matched,” she explains. Schichtel is herself a mentor, and that’s what led to the collaboration between Catholic Charities and the New Mexico Wilderness Alliance.

After hiking and exploring, the kids sit in the shade of the overhang at Travertine Falls. The spring’s flows have slowed to little more than a trickle in the mud, but bees and butterflies gather to drink. Schichtel pulls out the field guide again when a yellow-and-black western tiger swallowtail flits nearby.

She passes out activity books, and the kids set about answering questions, describing their day and drawing what they’ve seen.

When asked to read what they’re written, they take turns calling out the words they’ve used to describe the day: animals, lands, activities, fun and bird songs. “We smelled trees and they smelled good,” one says. “We played on the rocks!”

After they’ve completed their activities, Schichtel hands out the week’s patch, with the image of a Mexican gray wolf on in it.

“It’s not just any wolf,” she says, poised to talk about the rare canine that over the past two decades has been re-introduced into the Gila Wilderness. “Do you know what kind of wolf it is?”

“Werewolf!” shouts out one of the boys. They all giggle, and then head back down the trail.