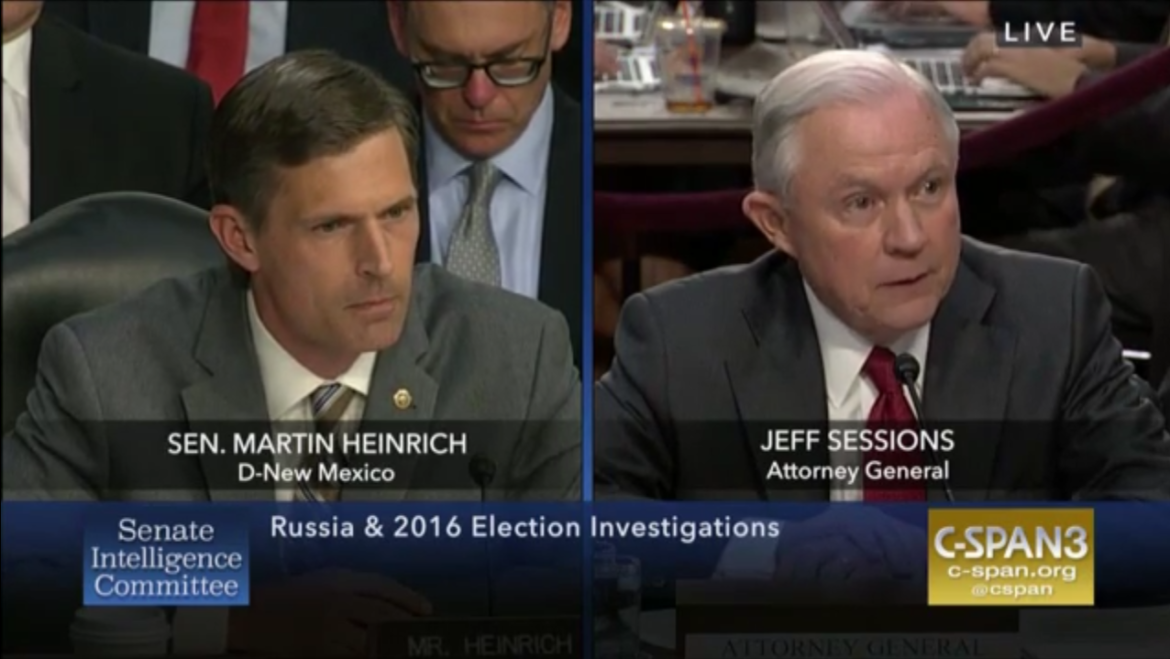 In yet another high-profile Senate Intelligence Committee hearing that received gavel-to-gavel coverage from news networks, one of New Mexico’s U.S senators played a featured role.

U.S. Attorney General Jeff Sessions testified in front of the committee, with Democrats pressing the former Republican U.S. Senator on a variety of issues, including his contacts with Russian officials.

In a number of cases, Sessions declined to answer, frustrating senators  who sought answers.

Heinrich’s questions to Sessions began with the senator asking if President Donald Trump “ever expressed his frustration” after Sessions announced he would recuse himself from the investigation into ties between those close to Trump and Russia during the elections.

Sessions said he was unable to share  what Trump said—but also said that he was not invoking executive privilege.

HEINRICH: My understanding is that you took an oath, you raised your right hand here today, and you said that you would solemnly tell the truth, the whole truth, and nothing but the truth, and now you’re not answering questions.

You’re impeding this investigation, so my understanding of the legal standard is that you either answer the question — that’s the best outcome.

You say, “This is classified, can’t answer it here. I’ll answer it in closed session.” That’s bucket number one. Bucket number three is to say, “I’m invoking executive privilege.” There is no appropriateness bucket. It is not a legal standard.

Can you tell me why what are these longstanding DOJ rules that protect conversations made in the executive without invoking executive privilege?

SESSIONS: Senator, I’m protecting the president’s constitutional right by not giving it away before he has a chance to review it.

HEINRICH: You can’t have it both ways.

SESSIONS: And secondly, I am telling the truth in answering your question and saying it’s a longstanding policy of the Department of Justice to make sure that the president has full opportunity to decide these issues.

HEINRICH: Can you share those policies with us? Are they written down at the Department of Justice?

SESSIONS: I believe they are.

HEINRICH: This is the appropriateness legal standard for not answering congressional inquiries.

SESSIONS: It’s my judgment that it would be inappropriate for me to answer and reveal private conversations with the president when he has not had a full opportunity to review the questions and to make a decision on whether or not to approve such an answer, one.

There are also other privileges that could be invoked. One of the things deals with the investigation of the special counsel as other —

SESSIONS: I would say that I have consulted with senior career attorneys in the department.

HEINRICH: I suspect you have.

SESSIONS: And they believe this is consistent with my duties.

Heinrich’s back-and-forth with Sessions presaged another taut exchange with a Democrat, Kamala Harris of California. Like Heinrich, Harris interrupted Sessions.

Unlike Heinrich, the female senator was reprimanded by the committee chair, Republican Richard Burr of North Carolina.