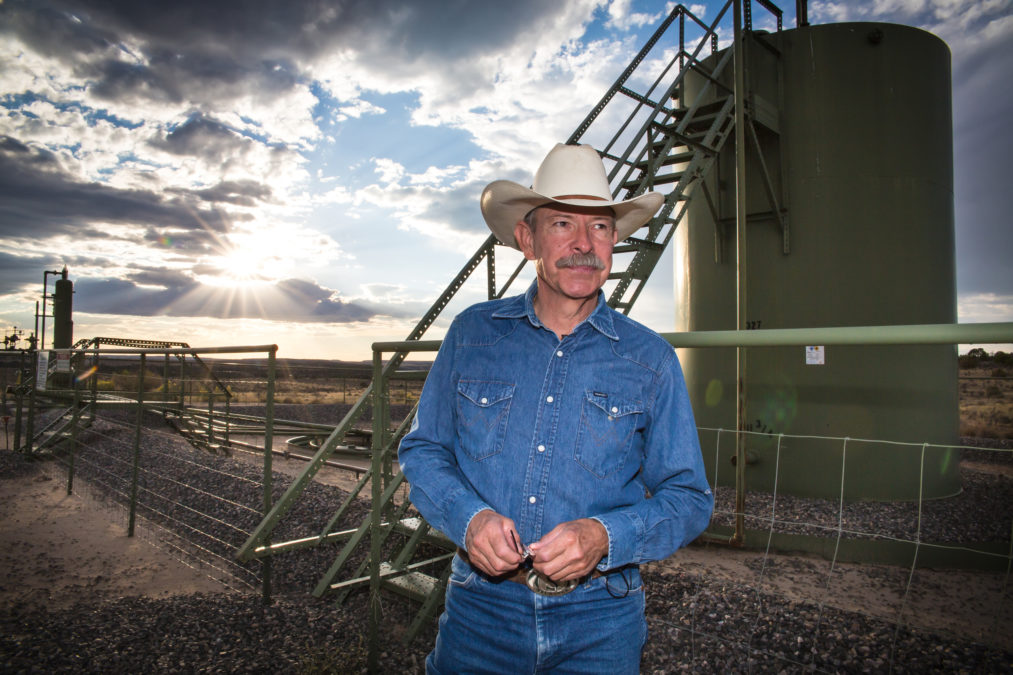 Don Schreiber on his ranch in Blanco, New Mexico. He is standing infront of one of the wells recently redrilled on BLM land that he leases. The Schreibers own over 400 acres and lease hundreds more from the BLM. They do not own their mineral rights so they are have to contend with the fracking industry on their land. They successfully took on industry and the BLM, persuading them to twin existing drill sites instead of drilling hundreds of new ones.

BLANCO, N.M. –  Most evenings, the quiet is almost intoxicating.

The whoosh of the wind through the junipers, the whinny of horses in their stalls, the raspy squawking of ravens – those are the sounds Don and Jane Schreiber have grown to love on their remote Devil’s Spring Ranch.

The views are mesmerizing, too. Long, lonesome ridges of khaki-colored rocks, dome-like outcrops and distant mesas rise from a sea of sage and rabbitbrush.

The ranch and surrounding countryside are a surprising setting for an enduring climate change problem: a huge cloud of methane – a potent, heat-trapping gas – that is 10 times larger than the city of Chicago. The main sources, scientists say, are leaks from about 25,000 active and abandoned wells and 10,000 miles of pipelines that snake across the San Juan Basin, providing about $3 billion worth of natural gas per year.

Home to stunning prehistoric ruins, cathedral-like canyons and silt-laden rivers, this basin in the Four Corners region of the Southwest emits substantially more methane per unit of energy produced than most major gas-producing areas, according to a Reveal from The Center for Investigative Reporting analysis of industry data reported to the federal government.

ConocoPhillips has been the region’s largest source of methane emissions, mostly from thousands of gas wells drilled on public lands managed by the Department of Interior. BP America is the second largest source.

“This is the Land of Enchantment. I love this state,” said Don Schreiber, whose ranch and 5,760 acres of nearby public grazing land are dotted with more than 120 natural gas wells. “But it is a black mark on our reputation that we allow this to persist.”

Every year, an estimated half million tons of methane loft into the air over the basin, a geologic area located primarily in northwestern New Mexico, according to a recent study published in the journal Environmental Science & Technology. That’s equivalent to the annual greenhouse gases emissions of almost 3 million cars, “a substantial amount of methane emitted from one region,” said Eric Kort, an atmospheric scientist at the University of Michigan and co-author of the study.

Although methane accounts for only 9 percent of U.S. greenhouse gases, it traps heat far more effectively than carbon dioxide. That’s why controlling it is considered essential to addressing climate change.

And while methane isn’t harmful to human health, other gases, such as benzene, that come from the wells are linked to cancer and other effects. Studies have linked the proximity of gas wells to a higher risk of birth defects in Colorado and increased hospital visits and respiratory and skin problems in Pennsylvania.

The San Juan Basin and Four Corners region – where Utah, Colorado, New Mexico and Arizona meet – are home to large expanses of Native American lands, including the 27,400-square-mile Navajo Nation, where some residents say the gases are making them sick, too.

“I feel nausea sometimes. I feel weak,” said Sam Dee, a 59-year-old rodeo announcer on the Navajo reservation in Utah just outside the basin. Near his home are gas and oil plants where pollution is flared into the air, contributing to the Four Corners methane cloud. “I am concerned for my grandkids, for their health and their climate.”

Cleaner-burning than coal and oil, natural gas is touted as a steppingstone to a more climate-friendly future. Getting it out of the ground, though, isn’t easy. Imagine a pressure cooker filled with mud, water, crude oil, natural gas and other substances. That pressure cooker is the earth. When companies sink wells, the natural gas – which is mostly methane – comes hurtling out along with everything else.

Inevitably leaks happen. In addition, large amounts of gas are vented and flared into the air intentionally to relieve pressure and force water out of wells.

Controlling methane was a priority of the Obama administration in an effort to combat climate change and air pollution. But President Donald Trump has moved quickly to suspend, and perhaps rescind, rules he considers burdensome to the energy industry.

In May 2016, the Environmental Protection Agency adopted a regulation aimed at reducing emissions from new and modified wells on private land by a half million tons by 2025. A few months later, oil and gas groups sued the agency to block the rule, calling it “excessive, uneconomic and threatening to the long-term production of oil and natural gas.”

Pruitt, who was Oklahoma’s attorney general for six years, has close ties to energy companies. Oil and gas companies donated more than $100,000 over the past two years to a political action committee tied to Pruitt, according to Federal Election Commission records. Documents and emails also show that Pruitt has had a long-time alliance with Devon Energy, the San Juan Basin’s second-largest oil and gas producer. Devon attorneys drafted a letter that Pruitt, as attorney general, sent to President Barack Obama’s EPA to challenge the methane rules.

Another Obama administration regulation targeted methane emissions from wells on public lands. But the Interior Department announced last month that it would “suspend, revise or rescind (the rule)  given its significant regulatory burden that encumbers American energy production, economic growth and job creation.”

Nationally, added oil and gas companies would have to spend between $125 million and $161 million a year to reduce leaks and flaring on public lands, although the recovered gas would have offset much of that, according to the Bureau of Land Management.

A massive plume of methane (brownish area at center) has been discovered near the Four Corners region that scientists attribute to natural gas production. The map above shows 2012 methane emissions from natural gas and oil production, the most recent data available. Sources: Gridded National Inventory of U.S. Methane Emissions, Stamen Design

A massive plume of methane (brownish area at center) has been discovered near the Four Corners region that scientists attribute to natural gas production. The map above shows 2012 methane emissions from natural gas and oil production, the most recent data available.Sources: Gridded National Inventory of U.S. Methane Emissions, Stamen DesignCredit: Eric Sagara/Reveal

Methane is a stealth pollutant. You can’t see it. At Four Corners, the first hint of trouble came from space in 2003, when a spectrometer on a satellite detected an enormous cloud of methane northeast of the Grand Canyon, stretching across 2,500 square miles. Each time the satellite orbited the Earth, the cloud was there.

In 2014, scientists identified the oil and gas fields of the San Juan Basin as the possible source. Energy companies pushed back; there are other sources, they pointed out, including natural seeps. But the scientists weren’t finished. They mounted a device on a plane that could spot individual leaks. They drove to many sites and recorded videos.

Of 250 plumes, four were from natural geologic seeps. One was from a coal mine. Everything else was from oil and gas drilling.

The companies maintain that these studies are too narrow in scope to be conclusive.

Although the San Juan Basin produces just under 4 percent of the nation’s natural gas, it emitted 10 percent of all methane pollution from oil and gas operations in 2015, according to industry data. One reason why: The region is larger than most national parks. Reaching wells and pipelines to repair leaks takes time. A lot can go wrong: Gaskets freeze, valves malfunction and welds fail, according to reports filed with the New Mexico Oil Conservation Division.

Some venting and flaring is unavoidable. But around 40 percent could be captured “with currently available control technologies,” the U.S. Government Accountability Office reported in 2010.

To the north, in Wyoming, where state officials have enacted methane rules, the upper Green River Basin produces twice as much gas as the San Juan Basin but emits only about half as much methane, according to Jon Goldstein, senior energy policy manager at the Environmental Defense Fund.

New Mexico has no state regulation.

“We live under the largest methane cloud in the entire country thanks to over 35,000 wells that are just across the line in New Mexico,” said Gwen Lachelt, a La Plata County, Colorado, commissioner who lobbied in the U.S. Senate to retain the Bureau of Land Management’s methane measure for public land.

Every year oil and gas companies report methane emissions and production data to the federal government. That information, obtained and analyzed by Reveal, identifies the polluters.

ConocoPhillips, the basin’s largest oil and gas producer with about 10,000 wells, emitted methane in 2015 at a rate more than three times higher than its rate for the rest of the country.

For BP America, its methane emissions rate in the basin was 17 times higher than its national rate. For Devon Energy, it was twice as high.

“The industry there is dirtier than the industry in the country as a whole,” said David McCabe, an atmospheric scientist with the nonprofit environmental group Clean Air Task Force. “You need standards so the public can have some assurance companies will take care of this.”

ConocoPhillips spokesman Daren Beaudo defended its San Juan Basin operations, which it sold in April to Texas-based Hilcorp Energy Co. and The Carlyle Group in Washington, D.C., for $3 billion. Nationwide, the company nearly halved the rate at which it emitted methane between 2012 and 2015, according to the data analyzed by Reveal.

“We’re concerned about emissions and we’ve been taking action to reduce them for more than eight years,” Beaudo said. “With a large number of operating wells, even small emissions add up.”

Few people are more familiar with the environmental costs of gas wells than Don and Jane Schreiber. Several wells are actually on their land courtesy of a federal “split estate” law that allows companies access to private land.

“Natural gas is a fine fuel,” he added. “But it is finite. That we would allow ourselves to waste it, cause local health problems and global climate change, there is everything in the world wrong with that.”

Not long ago, he drove around the countryside in his pickup, pointing out drilling sites and scars. “We’re down to fighting for the air we breathe,” he said.

Driving past one well on public land, he stepped on the brake. Under cumulus clouds as white as pearls and surrounded by pinyon pine, juniper and sagebrush, the setting was majestic. The air smelled like a gas station.