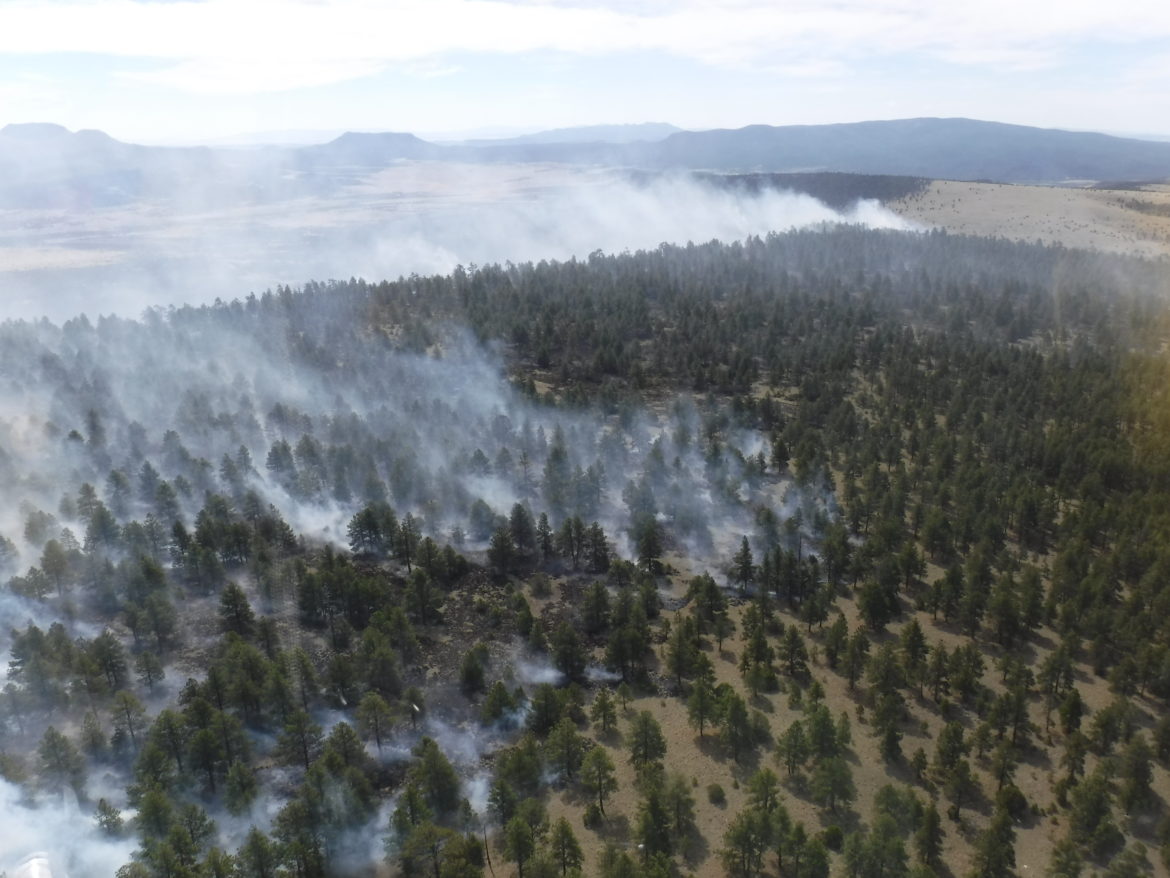 After a snowy winter and a relatively wet spring, some of New Mexico’s forests are starting to dry out. And quickly.

During their Wednesday morning fire call, officials with the Santa Fe National Forest heard the bad news: The National Weather Service forecast calls for increasingly hot temperatures with the possibility for thunderstorms on Sunday and Monday.

After that, conditions will be hot and dry for the foreseeable future.

“Leadership is looking at the possibility of fire restrictions,” said Julie Anne Overton, acting public affairs officer at the Santa Fe National Forest. “Especially with the rash of abandoned campfires on the Jemez district.”

Stage 1 restrictions, which she said could be announced as early as this week, prohibit fires and smoking except in developed recreation sites. Stage 2 restrictions prohibit any fires, smoking and firearms.

Visitors to the Jemez district have been leaving more abandoned and unattended campfires this year than in year’s past–and one earlier this week did escape its ring and cause a larger fire. Firefighters responded quickly, Overton said, and they were able to keep the blaze to less than a half-acre.

“To date, we’ve been lucky,” she said, noting that during dry conditions, a large wildfire is just “one abandoned campfire away.”

According to Forest Service policy, all human-caused wildfires must be suppressed. But when lightning strikes in the forest and ignites a fire, managers have some choices.

Depending on a number of factors, like the location of the fire, humidity levels and weather and wind conditions, officials may allow naturally-ignited fires to burn, especially if they’re in areas of the forest already scheduled to be “treated.” Treatments can include thinning—cutting out undergrowth and overly-crowded areas—or prescribed fires.

The conditions under which managers allow a fire to burn are very specific, said Overton, and safety of firefighters and the public are always the primary considerations.

Earlier this month, managers on the Carson National Forest decided to allow a lightning-started a fire outside the village of El Rito burn. They identified a boundary within which the Bonita Fire can move, said Audrey Kuykendall, acting public affairs officer on the Carson National Forest. Fire crews secure that perimeter by burning, and reducing the amount of fuel the wildfire can consume. As of Wednesday, that fire was about 1,200 acres. As conditions become drier and windier, however, Kuykendall said they would be “looking more at, not full suppression, but keeping it down.”

On Wednesday night, the New Mexico Environment Department and Department of Health issued a joint advisory for Vallecitos Canyon and nearby northern New Mexico communities, recommending that residents keep their windows closed overnight and until late morning, when the smoke typically lifts.

Between 2008 and 2015, an average of 6.3 million acres burned in the United States each year, according to a new report from the Forest Service’s Research and Development Wildland Fire and Fuels Program. That’s 170 percent of the annual average that burned in the previous two decades.

Federal agencies spend more than $1.7 billion a year on fire suppression. And state, tribal and local governments spend millions more on top of that.

According to the report, managers sometimes have to weigh sociopolitical factors in their decision-making more heavily than approaches based on science.

The report’s authors offer ideas to make science more implicit in their decisions and policies, including: incorporating science into all levels of decision-making, investing in public education and practitioner training and making information available about large, collaborative activities that reduce the risk of undesired fire and take advantage of the benefits of desired fire.

In the Gila National Forest in southwestern New Mexico, there have been 11 fires so far this season, said Gabe Holguin, the Gila’s fire and aviation staff officer.

Those have all been lightning-strike fires, he said. The mountains in that part of the state had a few good storms this winter and a wetter May than recent years. “That set us up for a season that’s favorable for managing wildfire for the beneficial results it produces,” he said.

Corral Fire on the Wilderness District of the Gila National Forest, June 5, 2017

They’ve suppressed a few fires, he said, based on their locations and after evaluating certain risks. But others are being actively managed. And five fires currently burning are in the Gila or Aldo Leopold Wildernesses, including the 5,500-acre Corral Fire and 2,500-acre Straw Fire. Those are monitored and mapped, he said, but not suppressed.

Compare those fires with the behemoths of recent dry years, when wildfires burned out of control in the Gila: The Whitewater-Baldy Fire, the state’s largest on record, burned nearly 300,000 acres in 2012.  Two years later, the Silver Fire burned 138,000 acres.

The benefits of healthy fire to southwestern forests are varied, he explained, including encouraging brush and grasses to grow, which provide food for elk, deer and other wildfire, as well as nutrient recycling.

In wetter forests, like in the Pacific Northwest, Holguin explained, nutrients make their way back into the soils when trees, branches and leaf litter rot. In the southwest’s dry forest, that process takes a lot longer—and fire is one way that nutrients are recycled.

“Fire reduces the amount of woody debris, fuels, logs, pine cones, needles, snags—that old stuff that is sitting out there for years and years, and it reduces future fire intensities,” he said. “If it burns in a good year like this, it reduces fire danger for future years.”