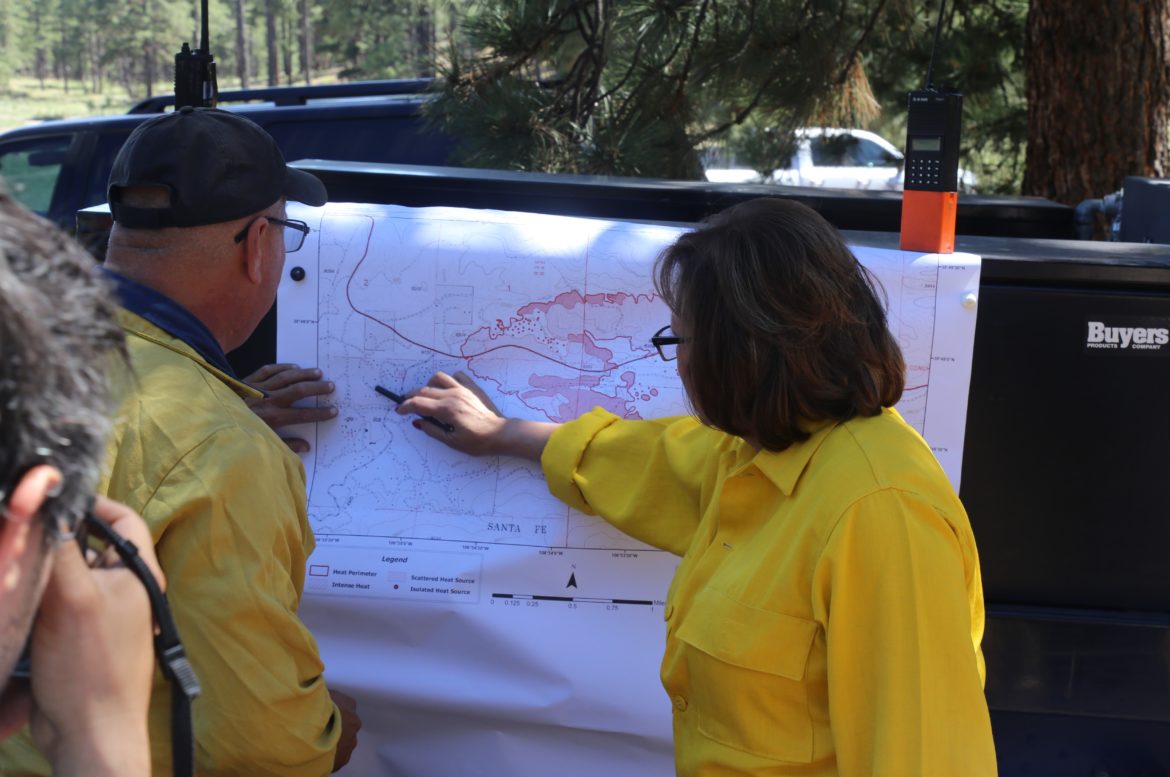 As of this morning, the 1,400-acre Cajete Fire in the Jemez Mountains was 80 percent contained, and all of the evacuees have been allowed to return home.

The Jemez Ranger District of the Santa Fe National Forest has experienced a rash of abandoned and unattended campfires so far this spring.

And even with a wildfire burning through the forest—and more than 400 people fighting it—fire officials still found three more abandoned campfires during their weekend patrols.

Firefighters arrived at the Sierra de los Pinos site within 15 minutes of the fire being reported.

“But with the dry conditions and high temperatures, even though they worked really hard to get it controlled, the conditions were such that they just couldn’t do it,” Overton said.

Even though the Cajete Fire was still relatively small, Overton said they called in a Type 1 firefighting crew early on because of the fire’s complexity and its proximity to about 300 homes and buildings.

Type 1, or Interagency Hotshot Crews, are the most elite and experienced firefighting crews and are typically assigned to the most dangerous or unwieldy fires.

Meanwhile, as the Cajete Fire is wrestled into control, fire conditions across the state will continue to worsen as temperatures keep rising and dry conditions persist.

As of Friday, the Santa Fe National Forest is under Stage 1 restrictions, which means campfires are allowed only in developed recreation sites.

Overton urged all visitors to extinguish their fires completely.

“You really need to have a five gallon bucket and a shovel, and probably have to do two, three, four dousings,” she said. “You should not leave the site until you can literally put the back of your hand against it and no long feel any heat.”

Since the 1980s, an increasing number of fires of over 1,000 acres have been burning in the western United States. As the climate warms, the sheer number of fires has grown, too, and the wildfire season has lengthened by about two months.

Related story: The Heart of Darkness

NM Political Report reached out to the governor’s office to ask how Martinez envisions addressing some of the impacts of climate change, including wildfire, drought and post-fire flooding. We will update the story when we receive a response.

Meanwhile, a fire in an undeveloped area in western Rio Rancho is 60 percent contained. The fire began Sunday and ballooned to over 1,000 acres. The fire is five miles from the nearest subdivision and is not considered a threat to homes.

Monday’s weather: the beginning of a heat wave. #nmwx pic.twitter.com/BDMZDVrsHA