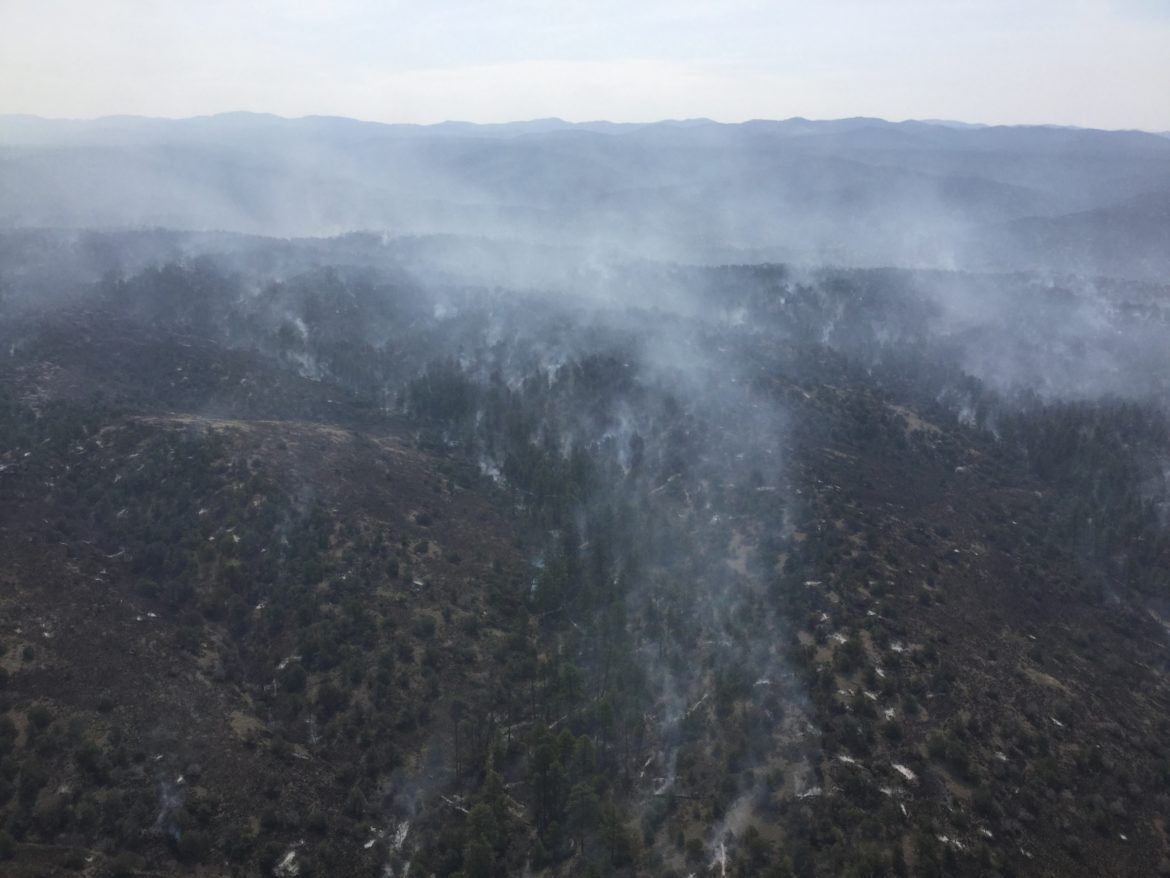 Corral Fire in the Wilderness Ranger District of the Gila National Forest, June 6, 2017

In our warming world, these conditions—piled one on top of another—won’t be unusual. According to NASA, May 2017 was the second warmest on record, just 0.05 degrees Celsius cooler than last May.

Summer temperatures in New Mexico are 2 degrees Fahrenheit warmer than in the 1970s. Since the 1980s, an increasing number of fires of more than 1,000 acres have been burning in the western United States. The number of fires has grown, too, and the wildfire season has lengthened by about two months.

Already, New Mexico is vulnerable to drought and water scarcity. And as the region continues warming, New Mexicans will continue facing an increasing number of public health risks and conflicts. Wildfires and dust storms both have widespread air quality impacts, and in southern New Mexico, the coccidioides fungus found in desert soils can cause Valley Fever when inhaled.

President Donald Trump’s recent withdrawal of the United States from international cooperation on climate change dealt a big blow to international relations and American credibility. A spokesman for New Mexico Gov. Susana Martinez has not yet responded to repeated requests to speak with him or Martinez about climate change and its impacts on New Mexicans.

But some communities in New Mexico are responding on the local level.

Sticking with Paris Accord

Earlier this month, Trump announced he was taking the United States out of the Paris Accord, an agreement among the nations of the world to cut carbon emissions in an attempt to avoid irreversible and catastrophic climate change.

Related story: U.S. steps off international stage, ‘getting out’ of climate accord

When Trump said he “was elected to represent the citizens of Pittsburgh, not Paris,” the mayor of Pittsburgh, and other cities around the nation, fired back.

Within days, more than 1,200 governors, mayors, businesses, colleges and universities declared they would continue to support climate action to meet the 2015 Paris agreement.

Among those was Santa Fe Mayor Javier Gonzales.

Santa Fe had already been working on a number of initiatives, he said, related to transportation, infrastructure, energy, food security, water conservation and cutting greenhouse gas emissions in an attempt to make the city “carbon-neutral” by 2040.

Local communities can have an impact on climate change, he said: School districts can install solar panels and build energy efficient buildings, for example, and business owners can advance green technology.

“Like President Obama and Pope Francis have said, the issues of climate change and inequality are the two biggest challenges confronting humanity,” Gonzales said. “Every day we wake up, we’re affected by what’s going on in our Earth. And people need to demand action from every policymaker, from the school board level to federal office.”

When Gonzales was a child, he’d walk along the acequias with his grandfather. “He would emphasize that water was to be protected, and not to waste it, and he was reminding us constantly to turn off lights,” Gonzales said. “He didn’t know about climate change or global warming, but there was a strong sense in him that you minimize your use of energy, and not to be wasteful.”

Leaders at the local level can move values like those into action, he said.

“I think that requires political leaders and environmental leaders to engage in very strong dialogue with the community,” he said. “The reality is, that this is climate change we are seeing happening in our communities, and we all have a role.”

Gonzales hopes other New Mexico mayors will join the effort.

“Look around New Mexico, and there are severe issues that we confront every year as a result of climate change,” he said. “The catastrophic wildfires that plague our cities and towns are a clear sign that it’s impacting us.”

He also pointed to water issues, the impacts of drought on agriculture and the “issue of jobs and the economic reality of moving forward into the 21st century and embracing clean energy.”

New Mexico’s energy future should be driven by wind and solar, he said, “but I have yet to see anyone at the state level lead the way toward that.”

After his office sent out a press release about the coalition, NM Political Report followed up to find out what commitments Balderas’ office was making, how those actions would be decided upon, tracked and enforced and if the office had a dedicated staff member.

The office responded with a broad statement.

“Attorney General Balderas is committed to protecting New Mexico’s families and its pristine and unique environment from the harms of climate change,” wrote Matt Baca, senior counsel, in an email. “To that end, our office will continue to pursue policy and litigation, where possible, to ensure New Mexicans have access to affordable clean power, transportation and climate-wise choices.”

While the headwaters of New Mexico’s most important rivers received ample snow this year, water managers, farmers and city residents shouldn’t count on that happening every year.

A recent paper in Geophysical Research Letters, a peer-reviewed journal of the American Geophysical Union, showed that snowmelt is responsible for 70 percent of the runoff in the western United States. Based on warming trends as the climate continues changing, by 2100, the contribution of snowmelt to runoff is expected to decline by one third.

The paper’s authors concluded that the warmer climate will cause “substantial impacts” on the water supply.

Earlier this year, scientists also wrote about the implications of “hot drought” on the Colorado River, which New Mexico relies upon, too.

According to that paper by Bradley Udall and Jonathan Overpeck, continued warming under current emissions scenarios will drive temperature-induced declines in the river’s flows. They estimate that will mean a 20 to 30 percent decrease by midcentury and a 35 to 55 percent decrease by the end of the 21st century.

The Rio Grande will experience decreases in average flows, as well.

That’s bad news for farmers, cities and even the flora and fauna that rely upon the river’s flows. It should also have New Mexico’s lawmakers and lawyers worried, too.

Currently, Texas is suing the states of Colorado and New Mexico in the U.S. Supreme Court, though New Mexico is the real target.

Texas alleges that by allowing farmers in southern New Mexico to pump groundwater connected to the river, the state is unfairly taking water from the Rio Grande that, under the 1938 Rio Grande Compact, should be flowing to Texas.

Were New Mexico to lose the case, currently scheduled before the U.S. Supreme Court, it could force southern New Mexicans to stop pumping groundwater—or cost the state up to a billion dollars.

Oral arguments will be heard later this year or in early 2018.