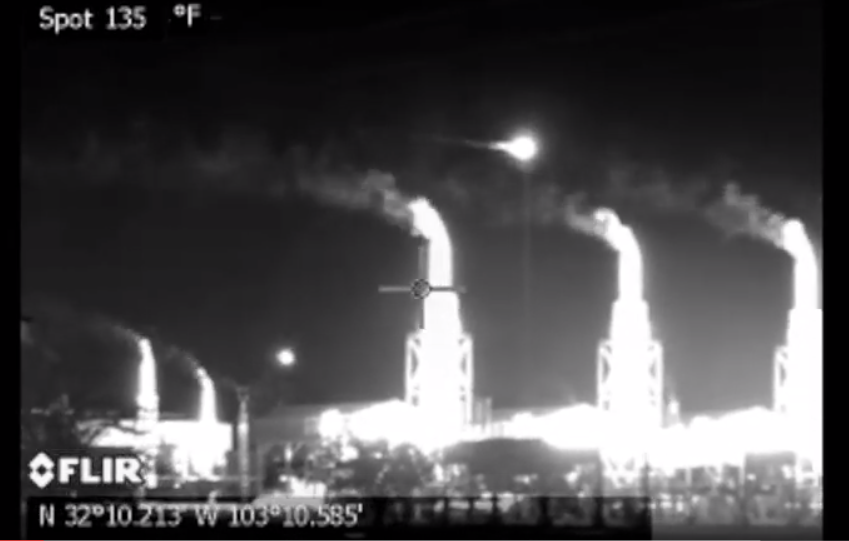 Screenshot of a FLIR video of the Jal Processing Plant in Lea County, NM. Video at https://youtu.be/Dqa5wGhSYYk

A federal court has thwarted plans by the head of the U.S. Environmental Protection Agency (EPA) to suspend an Obama-era rule tracking and cutting methane pollution from the oil and gas industry.

Last month, EPA Administrator Scott Pruitt suspended his agency’s implementation of the rule, which was opposed by the American Petroleum Institute, the Texas Oil and Gas Association and the Independent Petroleum Association of America. But on Monday, the U.S. Court of Appeals for the District of Columbia sided with six environmental groups and granted an emergency stay of Pruitt’s suspension. In their opinion, the appeals court judges wrote that Pruitt’s suspension of the rule was both “unauthorized” and “unreasonable.” They overturned it, calling it arbitrary, capricious and in excess of the agency’s statutory authority.

Jon Goldstein, director of regulatory and legislative affairs for the Environmental Defense Fund, said the court decision could have a big effect on New Mexico, particularly in the southeastern part of the state. “There is a tremendous amount of new drilling and new activity going on in the Permian Basin—$13 billion in investments since the first of the year,” Goldstein said.

By lifting Pruitt’s stay on the EPA’s methane rule, the court’s decision “will help ensure methane pollution from all those new rules will not just go up into the air in New Mexico.”

He also acknowledged that it’s still up to Pruitt to actually implement the rule. “It’s a big victory, but the battles remain to keep this rule in place,” Goldstein said. “And we’ll keep fighting those going ahead.”

Methane is the same gas that bakes your cookies and heats your home. It’s also a greenhouse gas that contributes to the planet’s warming.

The EPA’s methane rule, along with the BLM rule Zinke recently suspended, were both designed to limit the amount of methane escaping into the atmosphere at oil and gas wellheads and stations as well as along pipelines. Equipment leaks from malfunctioning or improperly installed components are among the largest sources of methane and other pollutants—like benzene and formaldehyde, both of which cause cancer—from the oil and gas industry.

Anyone who has driven along Highway 550 in recent years, especially near Nageezi and Lybrook, has seen oil field flares burning off methane and other gases. It’s trickier to envision what fugitive emissions and leaks look like, but there are specialized cameras that pick up greenhouse gases like methane as well as toxic chemicals like benzene, butane, xylene and about a dozen others.

The nonprofit Earthworks purchased a Forward Looking InfraRed, or FLIR, camera to document oil and gas field pollution as part of its Community Empowerment Project. Recently, Gulf Region Organizer for Earthworks Oil & Gas Accountability Sharon Wilson traveled to the Permian Basin where she documented emissions from wells, storage tanks and processing plants in Eddy and Lea counties. Wilson is specially trained and certified to use the FLIR camera, which is independently verified, to detect emissions.

Climate change is a huge concern, she said, pointing to international studies that show methane is 86 times more powerful at warming the planet than carbon dioxide. Methane also brings “hitchhiker” gases with it, she said.

“Eight grown men have died recently from on-site exposure to these hydrocarbon fumes, so imagine what they might do to a toddler playing in the backyard downwind,” Wilson said. “One of my videos was used in a peer-reviewed paper to show that the emissions traveled 23 miles away causing a spike on the state air monitor.”

What she saw in New Mexico alarmed her.

“The emissions I saw in the Permian are the worst I’ve seen anywhere,” she said. “And I’ve been to something like 15 states.”

So far this year, the oil and gas industry has reported 635 energy field spills, incidents or accidents in New Mexico. The state’s Oil Conservation Division (OCD) tracks the reports, which Jeremy Nichols, climate and energy program director with WildEarth Guardians, recently put into a digital map.

“It’s great that OCD provides that information and is being transparent about what’s happening on the ground,” he said. “It’s stuff everybody should know about and be on top of because even little incidents are a big deal. Releases, fires, these are all public health and welfare issues.”

According to Nichols, as development and hydraulic fracturing ramps up, especially in the Permian Basin, people should be concerned about development’s impact on the air, water and lands.

Tracking the accident and release data and compiling it into a map, Nichols said “confirmed our shock that it’s like the wild west out there [in southeastern New Mexico.].”

This week, WildEarth Guardians is challenging the U.S. Bureau of Land Management—which oversees federal mineral leases in the area, including those beneath some private lands—to cancel its upcoming lease sale. That sale, scheduled for September, is for more than 15,000 acres in southeastern New Mexico.

“It’s crazy to see all this is happening,” he said of the 635 accidents and releases so far in 2017. “It’s not like every one of these is newsworthy, but with more than 600 so far this year, that continues to beg the question: is it truly worth it, for this state and this state’s energy future?”

Industry has a clear answer to that question: yes.

In his testimony, Flynn pointed out that with the leadership of Gov. Susana Martinez, New Mexico has since 2011 successfully implemented regulatory reforms on energy and the environment and drastically decreased the amount of time required to grant air quality permits and applications for permits to drill (also known as APDs).

Flynn also praised Interior Secretary Zinke and said his success in turning around major challenges at that BLM will “have a profound impact” on New Mexico. Flynn continued:

Flynn estimated that the BLM’s “delays” for approving permits and “administrative problems” causes federal royalty losses of more than $1.5 million a day and New Mexico severance losses of about $831,000 daily.

While discussing the Permian Basin, Flynn noted that as of mid-June there were 59 drilling rigs in New Mexico versus 309 in Texas. He largely dismissed the fact that far more of the basin lies within Texas, and focused instead on the length of time it takes the BLM to approve permits.

Map of the Permian Basin. https://www.eia.gov/todayinenergy/detail.php?id=17031

“Fortunately,” he said, “Secretary Zinke and his staff have recently begun giving the Permian Basin the attention it deserves.”

Operating in New Mexico does provide one “distinct advantage” to operating in Texas, Flynn said—in royalty rates. Companies are required to pay only 12.5 percent royalties for operating on federal lands in New Mexico versus 25 percent for Texas fee land.

Even in a state like New Mexico, which is extremely dependent on revenues from oil and gas, rhetoric on development tends to fall along party lines. But that’s not always the case.

The new policy doesn’t prohibit companies from applying for an easement to drill, Dunn said. Instead, it requires more documentation, including hydrological information.

Oil and gas accounts for about 90 percent of the revenues collected by the State Land Office, Dunn said, and that includes more than $540 million for Fiscal Year 2017.

“To the state economy, that’s a big deal,” he said. “But when we looked at this water issue, I think there are other resources they can use other than the Ogallala potable water.”

The Ogallala, part of the High Plains Aquifer system, sits beneath eight states, including New Mexico and its levels have been dropping for more than five decades due to overpumping.

“I’ve heard about the Ogallala all my life, and these issues,” he said. “I had an uncle who farmed near Plains, Texas, that sold his farm in the ‘70s because of the drop in the Ogallala. This has been going on a long time.”

Dunn said he started watching it more closely last year, after hearing from towns and cities like Portales where officials are worried about running out of water.

Then, last June, Dunn’s office tried to withdraw seven water rights applications for wells planned for State Trust Lands. Those applications had been filed with the New Mexico Office of the State Engineer by a private company, GUS H20 LLC, to pump 700 acre-feet of water per year from wells on state lands. That company has sued Dunn’s office and is represented by attorney Brian Egolf, the Democratic Speaker of the state House of Representatives.

NM Political Report reached out to the Office of the State Engineer, but received no response. The state’s top water official, Tom Blaine, worked with Flynn at the New Mexico Environment Department before being named State Engineer by Martinez in 2015.

The state is well aware of the region’s water problems. Late last year, New Mexico approved a regional water plan that acknowledges some of the challenges. Planners estimate the region could experience serious water shortages during future droughts. The projected shortfall between supply and demand is between 94,000 and 166,000 acre feet a year.

Because Lea County has no permanent streams or lakes, more than 99 percent of the county’s water comes from underground sources, mainly the Ogallala. Meanwhile, the county has more than 19,000 active oil wells—and demand for water will continue to rise as drilling does.

Balancing the needs of farmers and ranchers with those of the oil and gas industry involves walking a fine line, said Dunn. The State Land Office, he said, is tasked with providing income for schools and hospitals and conserving lands in the long-term. “Conserving doesn’t mean you don’t do anything with it, you have to actively manage the land, in my opinion,” he said. The oil and gas community is not happy with his decision, Dunn said. “What we’re trying to do is what’s right,” he said. “In the long-term, New Mexico is going to have to protect its water resources.”