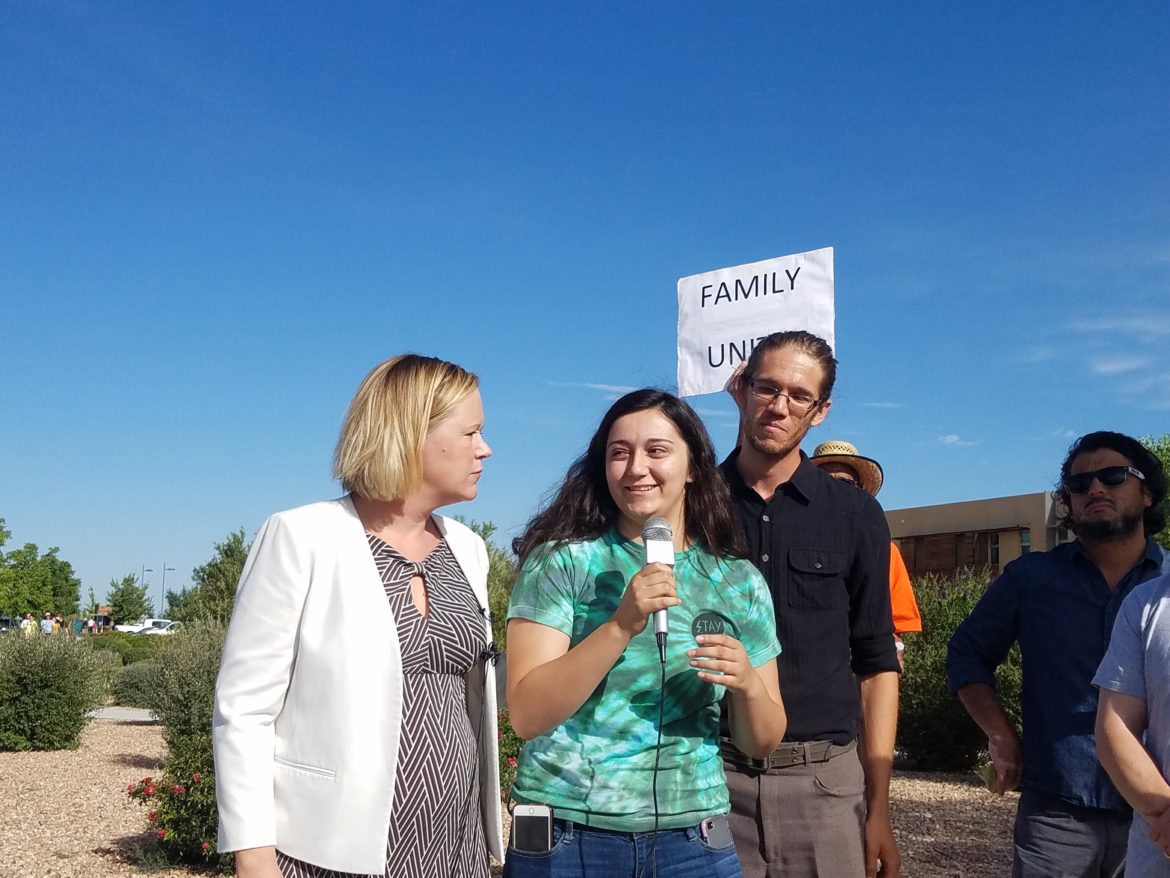 An Albuquerque resident and Iraqi refugee facing federal detention sought religious sanctuary instead of meeting with U.S. Immigration and Customs Enforcement (ICE) officials this morning. Fearing detention, Kadhim Albumohammed, who has lawfully lived in the U.S. since 1994, did not show up to his scheduled meeting with ICE Thursday.

Instead, his lawyer presented the federal agency with a letter stating Albumohammed’s intention to seek sanctuary at a local church.

His attorney, Rebecca Kitson, said the church and the Albumohammed family requested privacy “in this very difficult and trying time,” but said ICE is fully aware of Albumohammed’s location.

“He will be very transparent about his location and his choices,” Kitson told a crowd of a few hundred people outside an Albuquerque office of the U.S. Department of Homeland Security Immigration and Customs Enforcement.

Kitson told the crowd Albumohammed decided not to submit to federal detention because he “lost faith in the ability of our government to protect him especially in detention and given his very fragile health conditions.”

Legally admitted to the U.S. in 1994, Kadhim Albumohammed fled Iraq as a refugee out of fear of retaliation for his allegiance to the U.S. government. A few years later he was convicted and served out a sentence for domestic violence involving the mother of four of his children. Albumohammed was eventually awarded full custody of his children, but was still put on removal status by the U.S. government. That meant he could be deported back to Iraq. At that time, Iraq was not accepting deported refugees from the United States.

After President Donald Trump’s repurposed travel ban excluded Iraq this year, the county’s government  agreed to accept refugees like Albumohammed in exchange for not being part of that ban.

Adding to an already complicated situation, a federal judge in Michigan recently ruled that no Iraqi refugees would be deported. That does not however, Kitson said, stop ICE from detaining refugees on removal status and holding them in custody. People placed in detention can stay there indefinitely.

“He is now in the church for an indefinite duration,” Kitson said.

NM Political Report requested a comment from an ICE spokeswoman about the agency’s next steps.

Immediately after Kitson delivered Albumohammed’s letter, she told NM Political Report that ICE added the letter to his file with almost no other response to Kitson.

Rebecca Kitson on telling ICE Kadhim Al-bumohammed is seeking sanctuary and not showing up for detention. pic.twitter.com/paMTth9Umk

Albumohammed, Kitson said, originally unsuccessfully appealed his removal status in California, where he resided at the time. Kitson partly attributes the failure to win that appeals process on a missed court date due to a failure of Albumohammed’s lawyer at the time.

Now, Kitson said, Albumohammed’s only hope to start the process over again is the willingness of ICE to reopen his case, which she doesn’t see happening anytime soon.

“They have not offered to negotiate with us on this, they have not communicated with us in regards to his case,” she said.

Albumohammed’s daughter Courtney Albumohammed, offering her view on the situation, succinctly told the crowd, “I’m really happy that I get to keep my dad.”