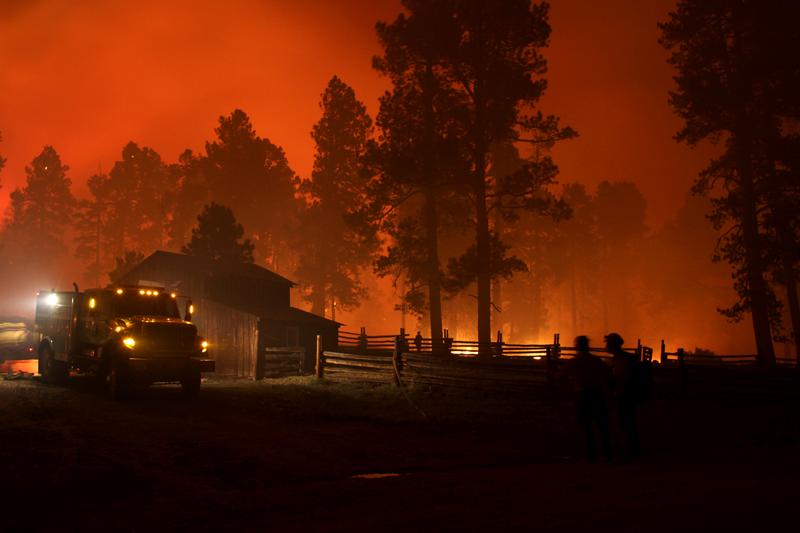 On the edge of the Valle Grande in northern New Mexico stands a grove of towering ponderosa pines. The trees, many of them between 250 and 400 years old, comprise what’s called the History Grove, and they offer a snapshot into what the forests of the Jemez Mountains looked like centuries ago—before widespread grazing in the late 19th century and decades of fire suppression by the federal government. During a recent trip there, I was reminded of what goes into protecting and maintaining our forests and landscapes.

Land management, as it’s called, is made of up of meetings and programs, line-item budgets and public comment periods. And sometimes, expensive lawsuits and bitter battles. But managing and protecting landscapes isn’t an abstract exercise. It involves real people. People who wrangle with challenges and weigh in on decisions, and who sometimes make sacrifices.

In the History Grove, the trees are spread apart from one another. The sun shines through the canopy and green grasses run beneath the ponderosas. There are flickers and woodpeckers and other birds singing and squawking that birdwatchers know but I can’t identify. Driving here, we passed historic cabins built in the early- to mid-20th century, including the one Sheriff Walt Longmire calls home on the Netflix series, Longmire.

In the winter, I’ve seen elk lounging among the pines. On this trip, Bob Parmenter, chief of science and resource stewardship at Valles Caldera National Preserve, points to a log where a bear has pawed through the soil underneath, looking for bugs.

Parmenter looks to the burnt ridge behind the grove and reminds me of the Thompson Ridge Fire. Ignited by a downed powerline at the end of May 2013, that fire burned nearly 24,000 acres of the Valles Caldera and the Santa Fe National Forest.

Then Parmenter says something that later keeps me up that night.

The Granite Mountain Hotshots saved this grove and the cabins before being assigned to the Yarnell Hill Fire in Arizona. The hotshots were trained to fight both structural fires and wildland fires, Parmenter said. So they were the perfect crew to be at the Valles Caldera. Interagency Hotshot, or Type 1, crews, are the most elite and experienced firefighting crews and are typically assigned to the most dangerous or unwieldy fires.

As the Thompson Ridge Fire approached the cabins in early June, the Granite Mountain Hotshots worked all night to protect them, Parmenter explained. They also lit backfires in the History Grove to save that iconic old-growth stand of ponderosas.

Reporter Fernanda Santos wrote about the men and the Yarnell Hill Fire in her 2016 book, “The Fire Line.”

“I was never truly aware of the job that wildland firefighters do, or the very important role they have in fighting fires but also treating the forests,” Santos told me earlier this week. Treating the forests can include reintroducing healthy fires—like the kind that burned through southwestern forests historically, nurturing stands like the History Grove—or allowing lightning-strike fires to burn naturally in certain places and under particular conditions.

Those fires help clean up the forest to reduce the risk of the big, disastrous fires, like Las Conchas, which tore through 156,000 acres of the Jemez in 2011 and burned so intensely that some ponderosa and mixed conifer forests will never grow back.

“I think a lot of people think that fighting a wildfire is like fighting an urban fire, you put the water on the flames and put them out,” she said. “They don’t understand that when they’re watching on the evening news an airplane dropping slurry or water on the flames, down there most likely is a crew of 20 men and women working to stop those flames by carving trails in the forest, fire lines.”

Many of those who live in the areas threatened by forest fires understand that human element.

Out on Highway 4, there’s still a sign thanking the firefighters who fought the Cajete Fire earlier this summer. When the Cajete Fire started in the Jemez Mountains last month, Forest Service officials immediately called in a Type 1 firefighting crew because of the fire’s complexity and its proximity to about 300 homes and buildings.

Communities often react with gratitude during and after an emergency, posting signs along highways and inundating firefighter camps with supplies and donations. We are grateful when they save our homes and favorite places by putting their lives on the line for the things we value.

During prescribed or managed fires, we’re not always that welcoming, even though the work the crews are doing prevents those same destructive wildfires. We complain about the smoke, or grumble when our favorite hiking trails are closed off during or after a fire.

Working on her book, Santos tried to understand not only what happened during the Yarnell Hill Fire, but what federal and state policies put firefighters in danger.

Writing about the Granite Mountain Hotshots has given her new perspectives.

“Now, every time I feel very hot in the summer”—she lives in Phoenix, where almost every day is hot in the summer—“I imagine how it is for people fighting fires right now,” she said. “Or if I feel exhausted, I imagine what it must be like to work 16 hours a day for 14 days straight, carrying all that weight on their backs, and the tools in their hands.”

“They are a special bunch of people,” she said, joking that most run away from reporters and don’t want recognition or credit for what they do. “They are incredibly brave, they are incredibly strong, and they are incredibly important to our country,” she said. That’s especially true as fires get bigger in the western United States and expand beyond their historic range and outside the “normal” fire season.

In the History Grove in northern New Mexico, many of these trees have stood for hundreds of years. They’ve presided over the warp and woof of changes in New Mexico’s history—the movement of tribes, the arrival of the Spanish, creation of the Land Grants, generations of herders and cowboys and the establishment of parks and public lands. There’s another story there now, too.

There isn’t a proper way to thank any of the fire crews, especially the Granite Mountain Hotshots, but those ponderosa pines that make the air smell like warm vanilla are still standing today because of the men and women who put themselves—their smartest plans, their tools and labor, their teamwork and their hearts—between the flames and the trees.