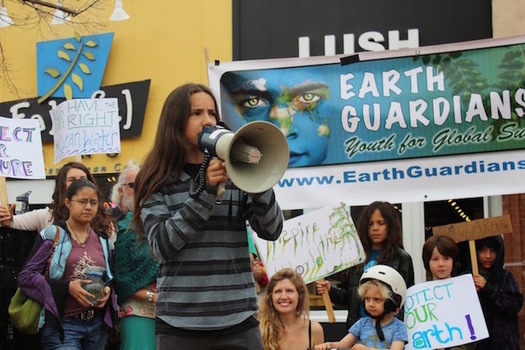 TAOS, N.M. — At a nature site near Taos, 25 young people from across the country are training with Earth Guardians to learn skills the group says might be needed to save the planet.

Earth Guardians started as an accredited high school in Hawaii in 1992 to promote environmental awareness and action. Since then, it has trained thousands of youth to raise awareness of environmental issues ranging from fracking to plastic bags at grocery stores.

Executive director Tamara Rose said the week-long training teaches kids how to be effective leaders and stand up for what they believe.

“We know a lot of young people are really hopeless, through the media or just even hearing conversations with their parents or, you know, a lot of other ways about what’s happening on the planet,” Rose said. “So, it gives them a sense of purpose, a sense of empowerment that inspires them to do really good things and to be leaders.”

A landmark constitutional climate lawsuit initiated in part by the Earth Guardians’ youth leader and 20 other kids is scheduled to be heard in a federal court in Oregon in early 2018. The lawsuit alleges the government’s actions are causing climate change that violates the youngest generation’s constitutional rights to life, liberty, and property.

Lawyers on the case also claim the extraction of fossil fuels violates the public trust doctrine that guarantees Americans a clean and healthy environment. Rose said many young people from Earth Guardians plan to speak at the Oregon trial.

“The young people who are plaintiffs on the case will actually be testifying, so they’ll be cross-examined by the fossil fuel industry and federal government,” she said. “So, the young people are definitely getting educated and preparing for the trial.”

The lawsuit was originally filed in 2015 against the Obama administration. The Trump administration is now using a rare legal procedure in an attempt to get the case dismissed.