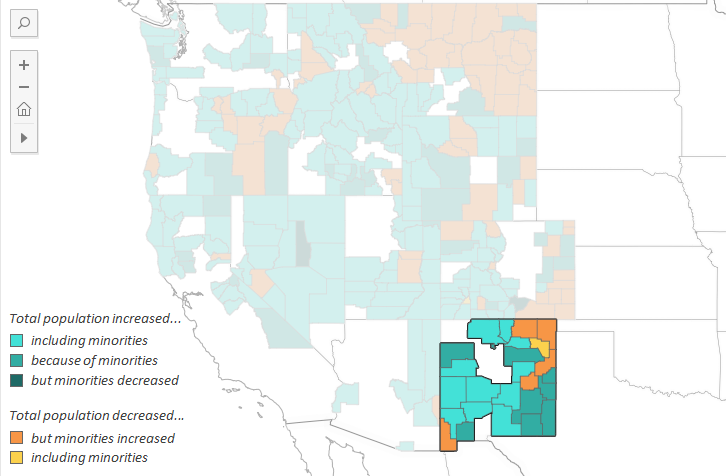 In the West, minorities are helping boost populations in rural areas, including in New Mexico.

That’s what a recent report by the independent research group Headwaters Economics found. Analysts looked at data from the U.S. Census Bureau and compared the populations and demographics of rural counties from 1980 to 2015. Nearly every county saw a growth in minority populations, echoing the shift in demographics of the nation as a whole.

This trend is as pronounced in New Mexico, which already has among he lowest percentage of white non-Hispanic white populations, as in any other western state.

Kelly Pohl, a geographer who works at the Montana-based Headwaters Institute, explained minority populations are growing in the western United States in part because of age.

This may be one reason why southeastern New Mexico counties have seen such large increases in minority residents. In Lea County, for example, the total population grew 22 percent from 1980 to 2015, from 55,993 to 68,149. In the same time period, Hispanics grew from 11,900 to 37,152. This means, even despite a drop in those listed as “people of color” (or those who self-identified as black, Asian, American Indian and Alaska Native, Native Hawaiian and other Pacific Islander) in the same time period, the growth in population was still driven by minorities.

There’s a similar trend in Chaves and Eddy counties. All three counties are in the “oil patch,” or an area with a large amount of oil development. This means they need a relatively young workforce.

“Young people move to where jobs are available,” Pohl said.

And since the minority populations are younger, they tend to have a higher birth rate.

Other trends also showed an increasing minority presence in rural areas of the West.

This is true in northeastern counties like Union and Quay. Union County, for example, lost nearly 10 percent of its population. But at the same time, the Hispanic population grew by 20 percent.

She adds that it’s important to understand the rural west, areas of which have outsized political power and are the source of natural resources.