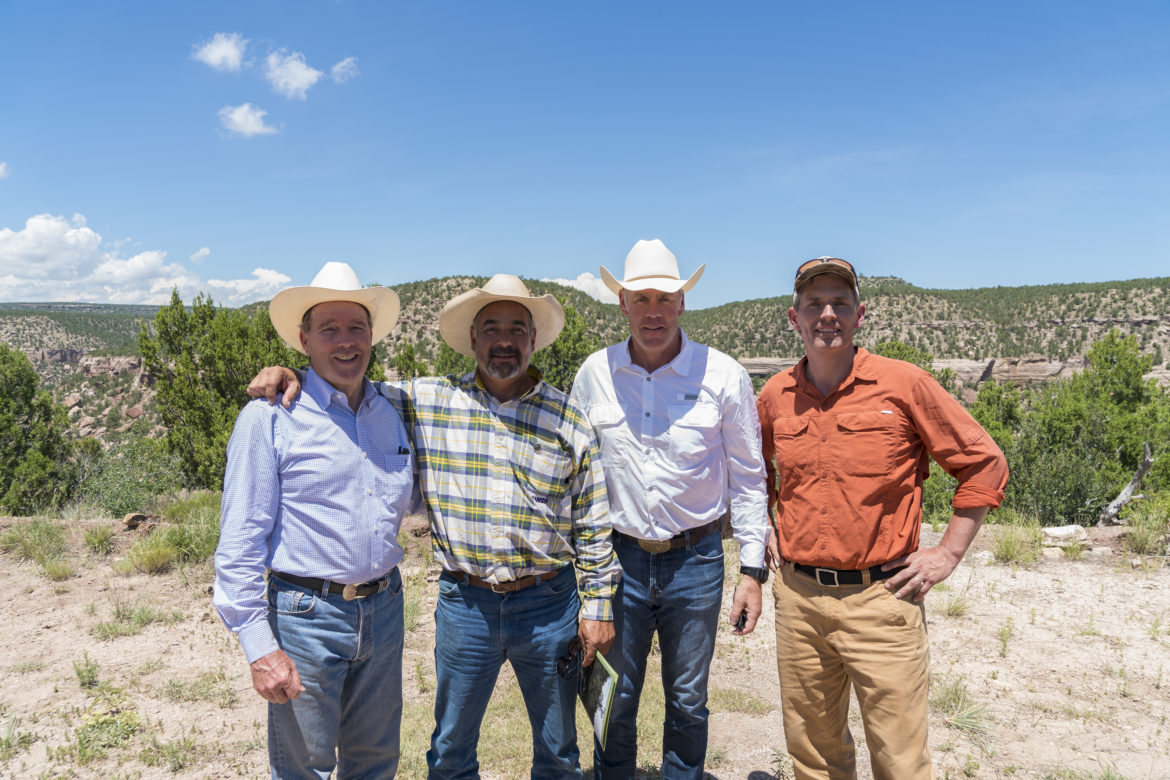 The U.S. Department of the Interior issued a press release about Secretary Ryan Zinke’s recent visit to the Sabinoso Wilderness in northern New Mexico—and a land transfer that would allow the federal government to open up a “landlocked” wilderness area to the public.

The announcement left many involved with the issue confused.

That’s because the secretary didn’t say he was denying or approving the land transfer. Rather, he said he “intend(s) to finalize the process to consider whether to accept” the donation of 3,595 acres of private land.

In other words, he would start the process of making a decision.

“We’re cautiously optimistic, but we’re not clear what he wants to do,” said Garrett VeneKlasen, executive director of the New Mexico Wildlife Federation, which was among the groups that invited Zinke to visit the Sabinoso Wilderness during his trip to the state in July. Those groups had asked the secretary to sign off on the transfer before September 1, when bow-hunting season begins in New Mexico.

Congress designated the Sabinoso Wilderness eight years ago, but because the area is surrounded by private lands, hunters, hikers and others can’t actually travel into the area’s 16,000 acres.

NM Political Report reached out to Zinke’s communications director, Heather Swift, who said the secretary will make a final decision only after an environmental study is completed under the National Environmental Policy Act (NEPA). The U.S. Bureau of Land Management (BLM), she wrote in an email, “is working expeditiously to complete the NEPA process so that a final decision may be made as soon as possible.”

That process, she said, is expected to take three to four months.

New Mexico Sen. Martin Heinrich hopes the review will wrap up within the next few months. He called Zinke’s announcement a “welcome development” and told NM Political Report he was excited that “this chunk of public land, that belongs to all Americans, is finally going to be open to them.”

He doubted the secretary would back away from approving the transfer at this point. “I think they’re fairly deep into it at this point, and it would be very difficult, as well as unpopular, to pull out now,” the Democrat said.

The land transfer has had widespread public support, in part because recreation has become a major economic driver in the West. “I think this is an indication of just how passionate people in the West have been about this specific chunk of ground, and the efforts to protect it and open it to public access,” Heinrich said. “And I think the secretary heard those voices, not just from New Mexico, but from around the West.”

Eight years in the making

Back in 2009, the BLM and others contacted the Wilderness Land Trust about buying neighboring lands and donating them to the federal government.

The trust started working with the owner of the Rimrock Rose Ranch, and finally bought the ranch in 2015, said Reid Haughey, the Wilderness Land Trust’s strategic advisor.

“And we have gone through the process of donating it to the BLM,” Haughey said. During the administration of President Barack Obama, then-Secretary Sally Jewell approved the donation. The agency also amended the wilderness area’s management plan to account for the addition of the new lands. “All that was done prior to the change in administration,” Haughey said. “The only thing that remained was to transfer the deed. Our understanding from the site visit and the press release is that the secretary has agreed to have it go forward, but it’s unclear what’s left that’s going to take several months.”

Haughey said that in addition to the amended management plan, other processes have been completed as well. That included an environmental site inspection—which he explained is similar to a home inspection completed during real estate deals—and the NEPA process. “There aren’t any more evaluation processes to be done,” he said.

Haughey and his colleagues would know.

Since 1992, the Wilderness Land Trust has completed 443 transactions in nine states and 102 wilderness areas, transferring a total of 48,500 acres from private ownership to the federal government.

“We were asked to get involved in this,” Haughey explained. “We’ve never transferred any piece of property to anybody but the U.S. government, and we’ve always managed to successfully transfer these land to federal ownership—mostly because we take on projects where there’s clear public support, as is the case here.”

The BLM wanted the land transfer to occur, he said, as did local sportsmen and the San Miguel County Commission. “From our perspective, the process is done, the secretary has accepted it and the new secretary simply is being asked to continue work on it and let it be finished up.”