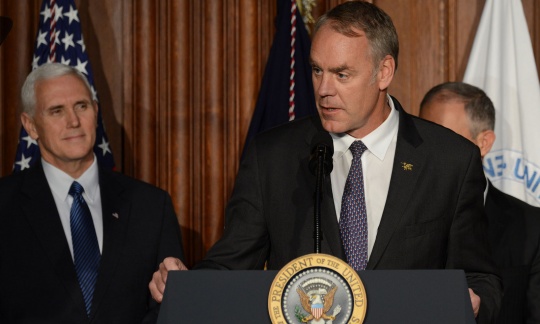 The review, which took place across the 10 Western states with existing sage grouse plans, ended with a contentious report filed to Interior Secretary Ryan Zinke last week. A panel of federal officials authored the report, which was released to the public on Monday. The report suggests scaling back protections for the imperiled bird, in an effort to give states (and likely industry) more flexibility. Some governors and industry groups say the recommendations open the door to more development. Conservationists have responded with resounding criticism, saying the report prioritizes oil and gas over sage grouse and their habitat, undoing the work of existing plans, finalized in 2015 after a decade of study and negotiations.

Livestock grazing, the development of agriculture, invasive species and fire have altered and fragmented sagebrush vegetation throughout the Intermountain West.

Here are key takeaways from the new sage grouse report:

The report recommends the evaluation and potential elimination of “sagebrush focal areas,” or SFAs, which limit development in some of the bird’s most sensitive habitat. In current sage grouse management plans, some SFAs are more helpful to conservation than others. Brian Rutledge, director of the Audubon Society’s Sagebrush Ecosystem Initiative, says the loss of certain SFAs “might remove some expansion space for the grouse, but it wouldn’t be terminally detrimental to the plans.” He’s more concerned with what are called “priority habitat areas.” These limit development in core habitat, but they could also be changed, according to the report. The weakening of these priority areas could lead to more development and further habitat fragmentation, Rutledge says.

The report recommends the use of population targets for helping to measure conservation success. That’s a thorny issue for many conservationists, who worry about a shift away from overall habitat health and greater reliance on captive breeding, a questionable method of conservation for sage grouse. Still, the report does not suggest getting rid of habitat conservation completely.

San Stiver, sagebrush initiative coordinator with the Western Association of Fish and Wildlife Agencies, says sage grouse population counts are tricky, “mainly because of large fluctuations in populations.” Stiver said in an interview he remains optimistic about the review, whose recommendations around population targets could in fact enhance the 2015 plans — “and we didn’t give up anything on the habitat end of it.”

For now, lawsuits from Idaho, Nevada and Utah — states that disagreed with the 2015 plans — will remain in play. Meanwhile, Zinke has directed agencies to immediately implement the recommendations. Over the next two months, his Interior Department will continue to meet with stakeholders to discuss the report. Further recommendations for changes to the 2015 plans are expected in October or November and in early 2018.

Any or all of these recommendations have the potential to unravel delicate negotiations between the feds, the states, ranchers, developers and conservationists — not to mention further endanger the grouse. In a statement following the report’s release, President and CEO for Defenders of Wildlife Jamie Rappaport Clark, said: “Interior’s proposed changes could irreparably damage sage grouse habitat, jeopardizing an unprecedented, collaborative effort to conserve this iconic species.”