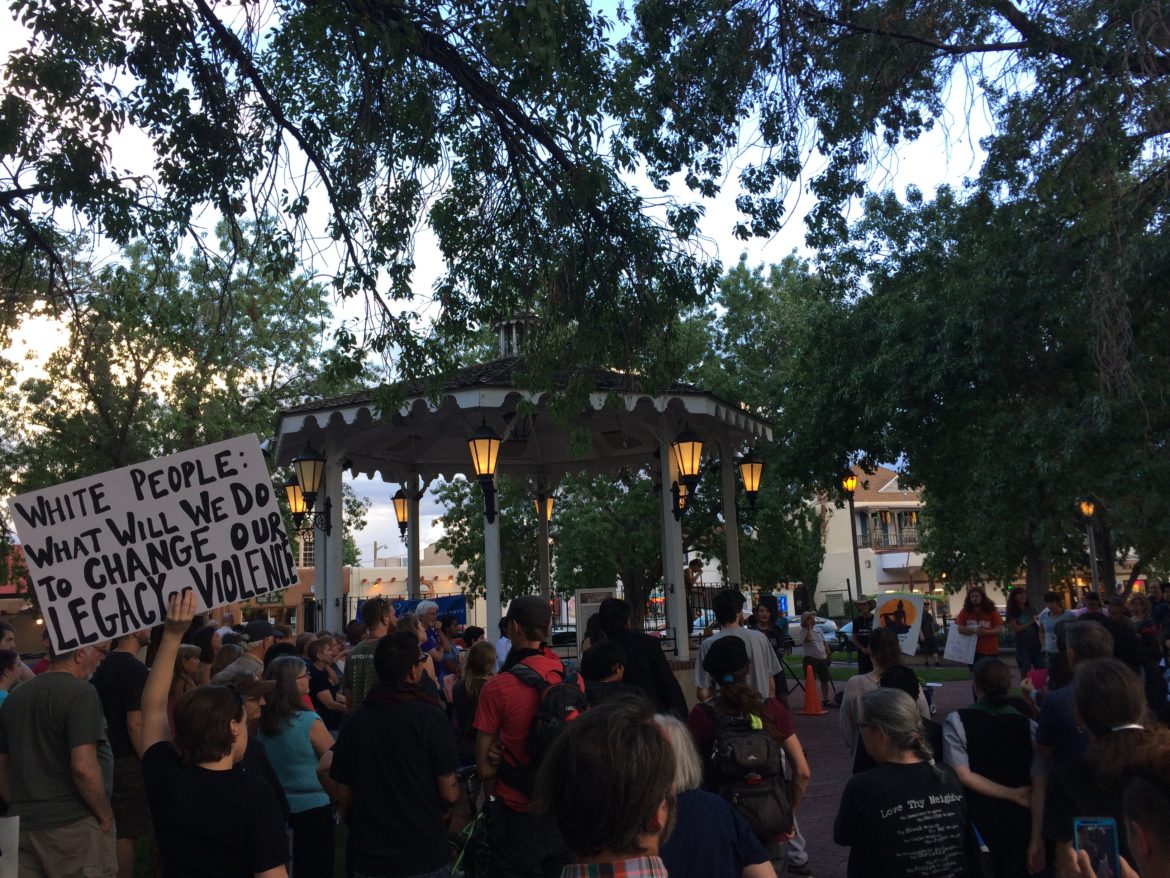 About 200 people gathered in Albuquerque's Old Town Plaza to respond to violence at a white supremacist rally in Virginia this weekend.

Sunday night in Albuquerque’s Old Town Plaza, the high staccato murmur of a toddler walking circles around the plaza hardly broke the silence of the approximately 200 people sitting in the grass and on the low walls around elm and cottonwood trees. People gathered to spend an hour in silence, in response to the weekend’s violence in Charlottesville, Virginia during a white supremacist rally.

Occasionally, a dog yapped or a motorcyclist gunned his motor. Some people closed their eyes, while others looked toward the sky or watched the two people meditating silently in the plaza’s gazebo. There were sniffles and coughs and the muted clink of glasses being cleared from the patio at a restaurant on the edge of the plaza.

No one seemed bored or impatient. People didn’t stare at their phones or walk away.

Instead, people settled into the space. While monsoon clouds threatened rain, people sat silently together and tried to understand this moment in history.

Once the hour of meditation ended, a number of people spoke to the crowd, including mayoral candidate Tim Keller. Albuquerque has long been a multi-cultural leader, he said, and now the city needs its leaders to stand up against racism. Keller added that each person needs to stand up, as well.

Lisa Christopherson with the group Albuquerque Indivisible took the stage and told the crowd of how decades ago, her parents were arrested for being an interracial couple. She and her siblings were evidence of their union, she said.

“I am America,” she said. “The person sitting next to you is America.”

People aren’t helpless, Chrisopherson said, and can call out to those in power to say, “I don’t like what happened. I don’t want a superficial investigation. I want something that goes deep and roots out what’s wrong with America.”

With tango dancers ready to take the gazebo for their regularly scheduled Sunday performance, speakers moved to the grass, and a group of indigenous women and activists spoke.

Selina Villa raised the question to the predominantly white crowd, “What are you doing to help communities of color? You have the privilege. You can help us.”

A Diné woman, who identified herself to NM Political Report only as Lola, said to the crowd, “It’s sad that this had to happen to bring us all together. But this isn’t the last time.”

She mentioned the fight against the Dakota Access Pipeline and the U.S. government taking indigenous lands. “We need to work together. We need to hold eachother accountable,” she said. “We need to love each other, right now.”

Spurred by the weekend’s violence in Virginia, more than 700 cities nationwide held vigils or rallies on Sunday in opposition to the white supremacy movement. On Monday, the City of Santa Fe and Interfaith Leadership Alliance will hold a rally on the Santa Fe Plaza, beginning at 6:00pm.

A sign quoting the mother of Heather Heyer, the woman who was killed while protesting against white supremacists in Virginia.