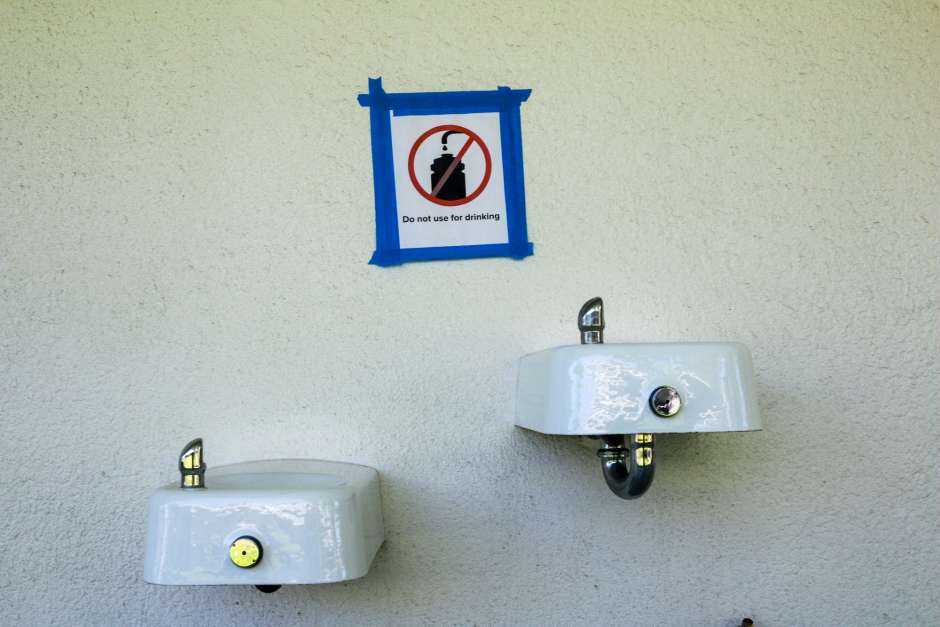 At Alice Birney Elementary School in San Diego, school officials placed signs above fountains to warn children to avoid them.

WASHINGTON, D.C. – When Ceon Dubose Palmore got thirsty at school, an administrator had to escort the 15-year-old past trash-bag-covered fountains to a faucet two floors down.

This report is part of a project on drinking water contamination in the United States produced by the Carnegie-Knight News21 program.

Like many schools across the country, her Washington, D.C. middle school discovered lead in its drinking water, making most fountains unsafe to drink. It took months to install filters sporadically around the school.

Ceon rarely asked to get a drink from the working fountains since teachers didn’t want kids disrupting class time.

“It made it a lot harder for kids,” Ceon said. “I also think it impacted me a lot because I have problems with hydration and stuff, so if I couldn’t drink water, it would distract me for the day. It would get me in a lot of trouble.”

While schools often struggle with the aftermath of finding lead in their drinking water, education advocates and health professionals agree that there’s an even costlier scenario: not knowing at all.

A News21 analysis showed 44 states don’t require schools to check for lead, and the federal government doesn’t require it either. Thousands of schools scrambled to test after learning that lead had seeped into the public water supply and created a public health crisis in Flint, Michigan, but lead experts say the majority of schools across the country still don’t know what’s in their water.

“Most people thought this must be a problem somewhere else, in communities like Flint, but not necessarily where I get my water and certainly not where my kid goes to school,” he said. “It’s really important to educate the public about how widespread this problem is and how there’s likely a threat to their own children’s drinking water right where they live, whether it’s an urban community, a rural community or a suburban community.”

The responsibility to test overwhelmingly falls on cash-strapped school districts, which  often don’t have the funds or incentive to make lead testing and remediation top priorities. In California, lawmakers trying to approve statewide mandatory lead testing have been met with strong opposition from some school districts that fear dealing with positive tests would cripple their bank balance.

“There is an aversion to both the monetary cost of fixing the problem and also to the public relations cost of fixing the problem,” said Yanna Lambrinidou, a Virginia Tech researcher who has long studied lead in schools’ drinking water. “The idea that schools would have to disclose to parents that there’s lead flowing out of drinking water taps and have to deal with the alarm and outrage that naturally would come from that, and then the issues of distrust, and then parents and communities wanting to get more involved – all of these things are … a headache.”