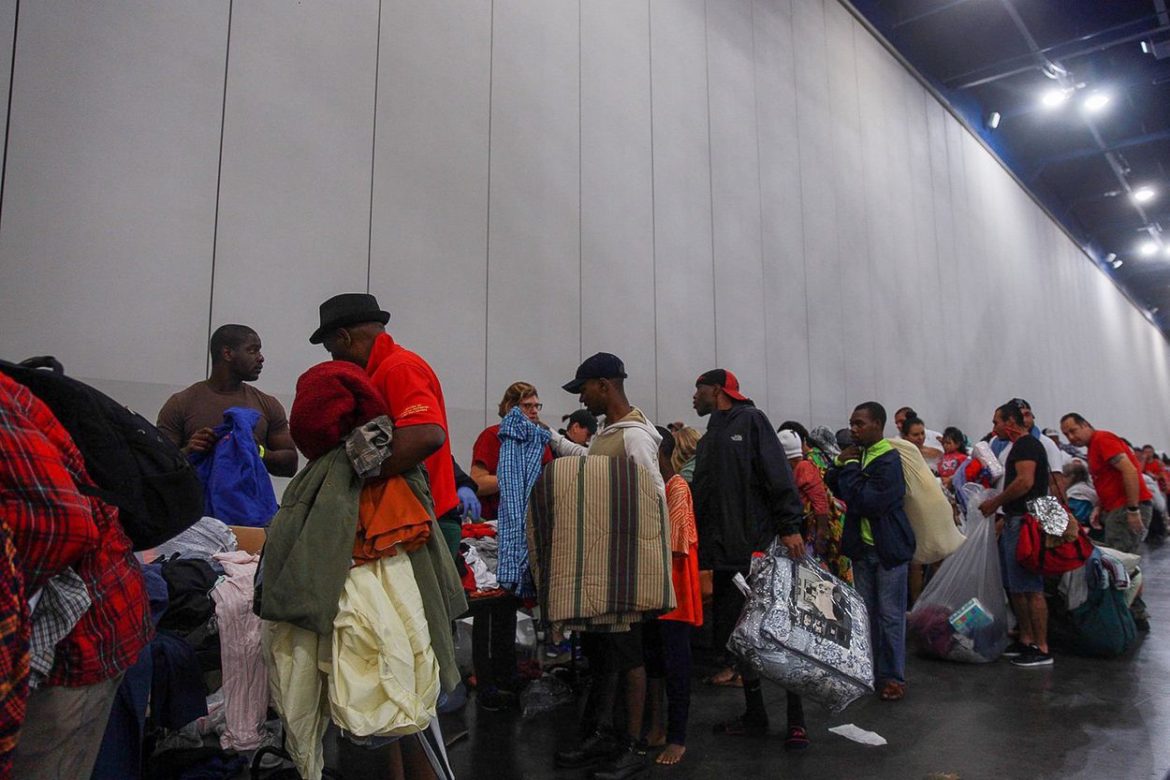 Evacuees seeking shelter from flooding wait in line to get into the George R. Brown Convention Center in Houston on Sunday, Aug. 27, 2017.

Houston Mayor Sylvester Turner on Monday morning sent a clear message to members of Houston’s immigrant community who might fear seeking help during Hurricane Harvey because of their legal status.

“There is absolutely no reason why anyone should not call [for help]. And I and others will be the first ones to stand up with you,” Turner, an attorney, said to reporters. “If someone comes and they require help and then for some reason [someone] tries to deport them, I will represent them myself.”

Turner responded directly to a question about Senate Bill 4, the state’s immigration-enforcement law that seeks to outlaw “sanctuary” jurisdictions. Gov. Greg Abbott signed the law in May and it is scheduled to go into effect Friday. But the law could be postponed if a federal judge approves an injunction this week in response to a suit from several cities and counties challenging its constitutionality.

The law would forbid police chiefs, sheriffs and others from preventing an officer from asking about a person’s immigration status during an arrest or lawful detention. It would also require that jail administrators honor all requests from Immigration and Customs Enforcement officials to hold an inmate for possible deportation.

The law has stoked fears within the immigrant community, with some dreading the possibility of being asked for their status when they come into any contact with law enforcement. But Republicans who back the bill have pushed back and said the law only targets immigrants who have committed serious crimes.

During his news conference Monday, Turner said Texans should put the “law on the shelf” as rescue efforts in Houston continue.

“I don’t care who you are, I don’t care what your status is. I do not want you to run the risk of losing your life or [that of] a family member because you’re concerned about SB 4 or anything else,” he said.

Shannon Edmonds, the director of governmental relations for the Texas District and County Attorneys Association, said even if SB 4 goes into effect during the rescue operations, undocumented immigrants should not fear law enforcement. But he also conceded that immigrant communities also have their own interpretation of what the law could mean.

“Technically the law is directed at detentions related to the commission of a crime,” he said. “The problem is the inference that people in those communities may draw: that it won’t be limited to those kinds of circumstances. And that’s always been one of the objections to it.”

Turner’s comments came after some Houston-area lawmakers took to social media on Sunday to try to soothe concerns.

“It’s urgent that if you have an opportunity to leave, that you do so,” state Rep. Armando Walle, D-Houston, tweeted in Spanish. “Your immigration status has nothing to do with it.”

This article originally appeared in The Texas Tribune at https://www.texastribune.org/2017/08/28/houston-mayor-turner-says-put-sb4-shelf-during-rescue-efforts/.

Texas Tribune mission statement: The Texas Tribune is a nonprofit, nonpartisan media organization that informs Texans — and engages with them — about public policy, politics, government and statewide issues.