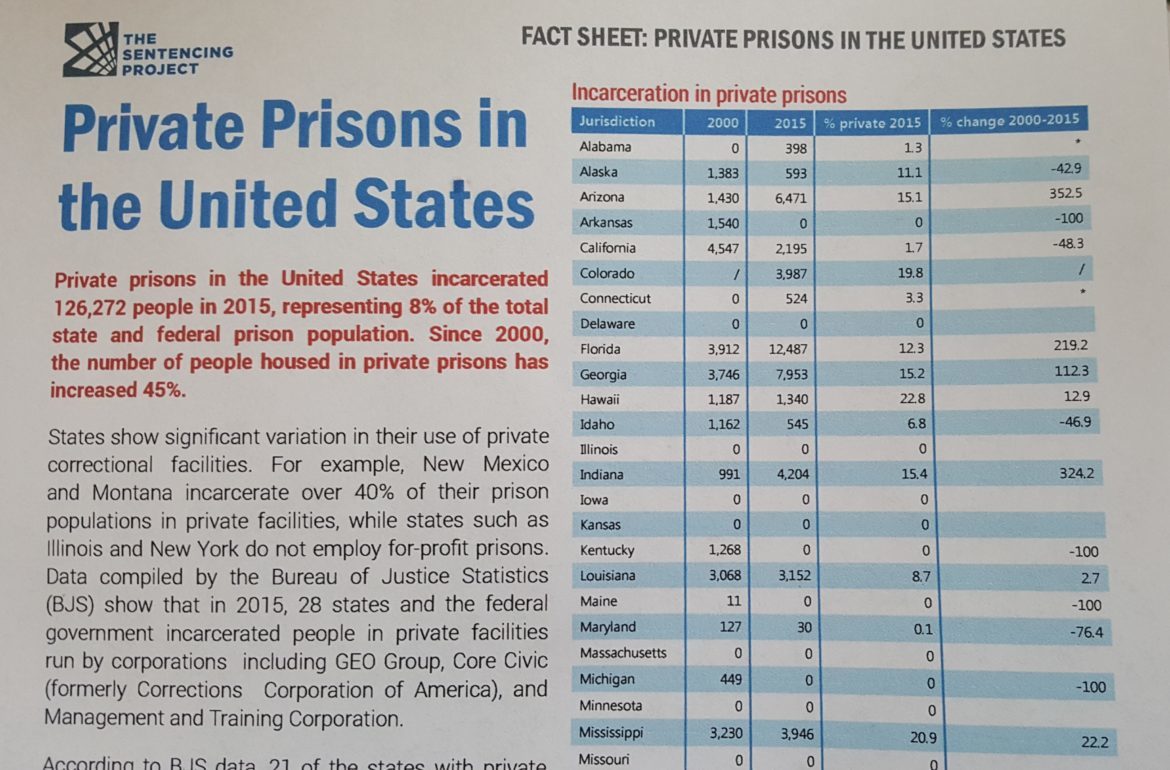 New Mexico leads the nation in the percentage of inmates it incarcerates in private prisons, followed by Montana, according to an analysis by The Sentencing Project, a nonprofit group that advocates for reforming prison conditions and sentencing laws.

New Mexico incarcerates a higher percentage of inmates in privately run, for-profit prisons than any other state, according to a new analysis from the Sentencing Project.

It’s a designation New Mexico has held for many years.

More than 42 percent of people imprisoned here were being held in one of the state’s five private prisons at the end of 2015, according to the analysis, which is based on figures from the Bureau of Justice Statistics (BJS). Three of those prisons are operated by GEO Group, Inc.; Core Civic (formerly Corrections Corporation of America) and Management and Training Corporation each run a prison in New Mexico as well.

This story originally appeared in New Mexico In Depth and is reprinted with permission.

The rest of the New Mexico’s inmates are housed in six government-run prisons.

Montana (40.4 percent) was the only other state to top the 40 percent threshold, according to the analysis. Just six states (Hawaii, North Dakota, Mississippi and Oklahoma) held 20 percent or more of their inmates in private prisons.

The Sentencing Project, a nonprofit group that advocates for reforming prison conditions and sentencing laws, also compared BJS statistics from 2000 and 2015 to examine the change in each state’s reliance on private prisons. In both years, New Mexico  was tops in the nation in percentage of inmates incarcerated in private prisons. The state has used for-profit prisons since the 1990s.

Nationally, private prison use has increased by 45 percent from 2000 to 2015, while the country’s overall prison population has jumped 10 percent, according to The Sentencing Project.New Mexico housed 3,026 of its 7,167 inmates in for-profit prisons in 2015. That’s a 40 percent increase since 2000. Some states, such as Arizona (353 percent) saw significantly larger increases during the 15-year period, The Sentencing Project analysis found.

The analysis comes amid a shift in federal policy around the use of private prisons — and on the heels of a Justice Department Office of the Inspector General report that found for-profit prisons are more dangerous than their state-run counterparts.

Under President Barack Obama, the federal Bureau of Prisons was moving away from contracting with private corporations to house federal inmates and, ultimately, phase out the use of private prisons entirely.

It is unclear whether the shift under Obama would have impacted states’ use of private prisons.