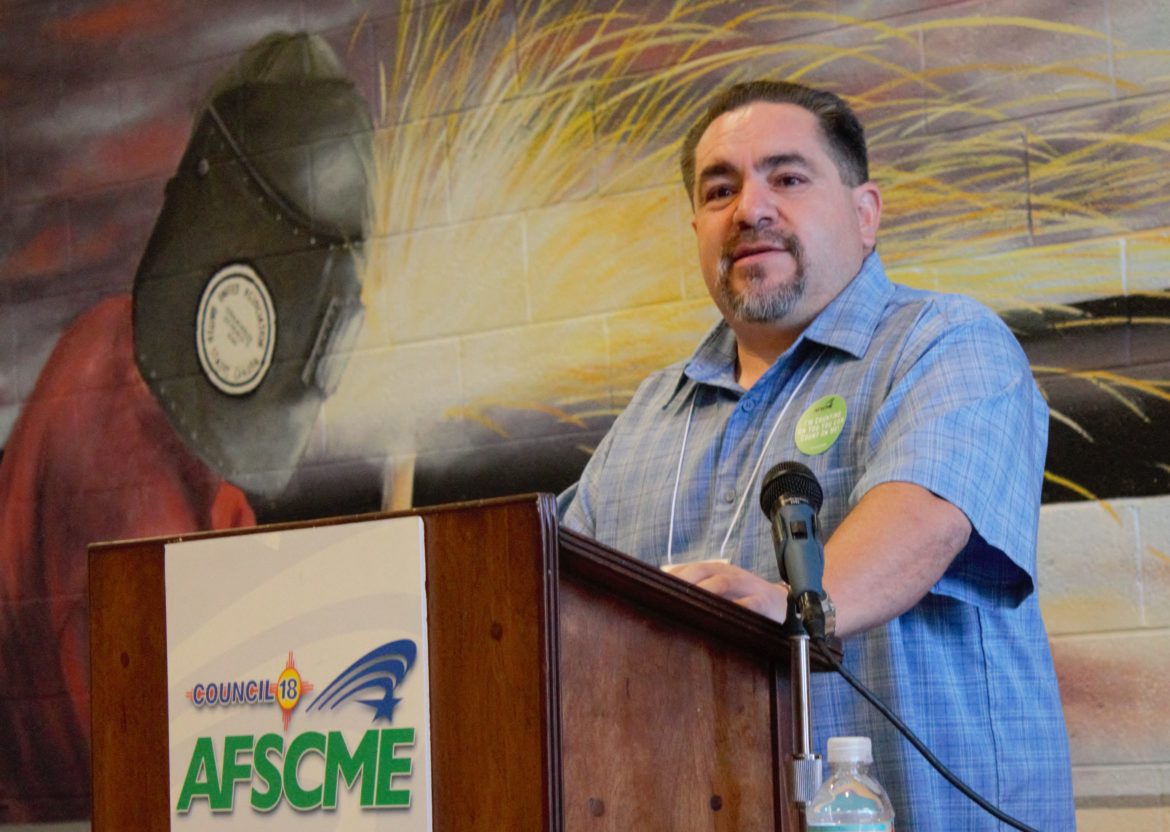 Across the country, Americans are working longer hours for less money and fewer benefits. New Mexicans are working harder, but are finding it more and more difficult to make ends meet. All the while, a handful of CEOs and the very rich have seen their salaries and wealth skyrocket. Regressive tax codes across America help the wealthy increase their treasure while avoiding paying their fair share in taxes.

This is not by accident.

Our country’s elite – along with the politicians who do their bidding – have rigged our economy and our political system against working people. Despite the pseudo, working-class rhetoric, Trump’s administration hasn’t done diddley to change this fact.

Casey Padilla was born and raised in Albuquerque New mexico and continues to raise his family in the South Valley. He works for Albuquerque’s Solid Waste Division and is the President of Local 624, ABQ Blue Collar, Transit and Water Authority. He is also the Council 18 President, representing 55 Locals across New Mexico.

This Labor Day, working people are resolute, America must confront this rigged system head on. It’ll take a lot to fix it – and we can start by protecting and strengthening voter freedom and the freedom of American workers to join together in strong unions. When barriers are removed, working people have the opportunity to speak up together. Through unions, we make progress that benefits everyone.

Even when the deck is stacked beyond all odds, the strength in numbers that unions provide lifts up communities. In 1968, almost fifty years ago, Dr. King marched alongside striking sanitation workers who demanded safer working conditions and the freedom to join a union. It was their union that gave them a voice and the power in numbers to address deadly work conditions, and racist so-called “right-to-work” legislation. To this day, so called “right to work” laws drive down wages wherever they are in place.

Today, despite unprecedented attacks like so-called “right-to-work” legislation, or attacks on prevailing wage and other political scams, people in unions continue to win better rights, benefits, and job protections. Union don’t just lift up members, our battles shore up the foundation of entire communities.

Higher union membership helps entire communities lift wages to represent a fair return on our labor. Unions use the collective voice to advocate for policies that benefit all working people – like good public services, public safety, increases to the minimum wage, improving health care, and great public schools. That is why working people across the country are calling on elected leaders and candidates running for office to publicly support the freedom of working people to join together in unions and make their communities better.

We know the truth: When politicians keep their noses out of the freedom of workers to join together in unions, other freedoms become more secure as well. Like the freedom to attend a parent-teacher conference, or take a day off when a family member is sick without fear of losing our job or pay. Or the freedom to choose where to live because high-quality public schools are available in all communities, not just the wealthy ones. Or the freedom to retire with dignity and a stable income like social security or a pension.

Unions like mine fight for these freedoms for everyone, and that’s why we are the target of the CEOs who have used their wealth and power to rig our country’s economic rules against working people. They are now trying to get the Supreme Court to take up a case, Janus v. AFSCME that would strike at the freedom of working people to join together and fight injustice through their strong unions, threatening to rig the economy even further.

If corporations and politicians wipe out our freedom to form unions, they’ll be able to keep driving down wages, killing jobs by defunding and outsourcing public services, defunding our public schools, silencing working people at the ballot box, and crippling the fundamental values we celebrate on Labor Day.

Labor unions are more critical to America’s success than ever. Union members know that freedom is not given, it is fought for, and it has to be protected. And we’re going to keep fighting to protect it and fix this rigged system once and for all.