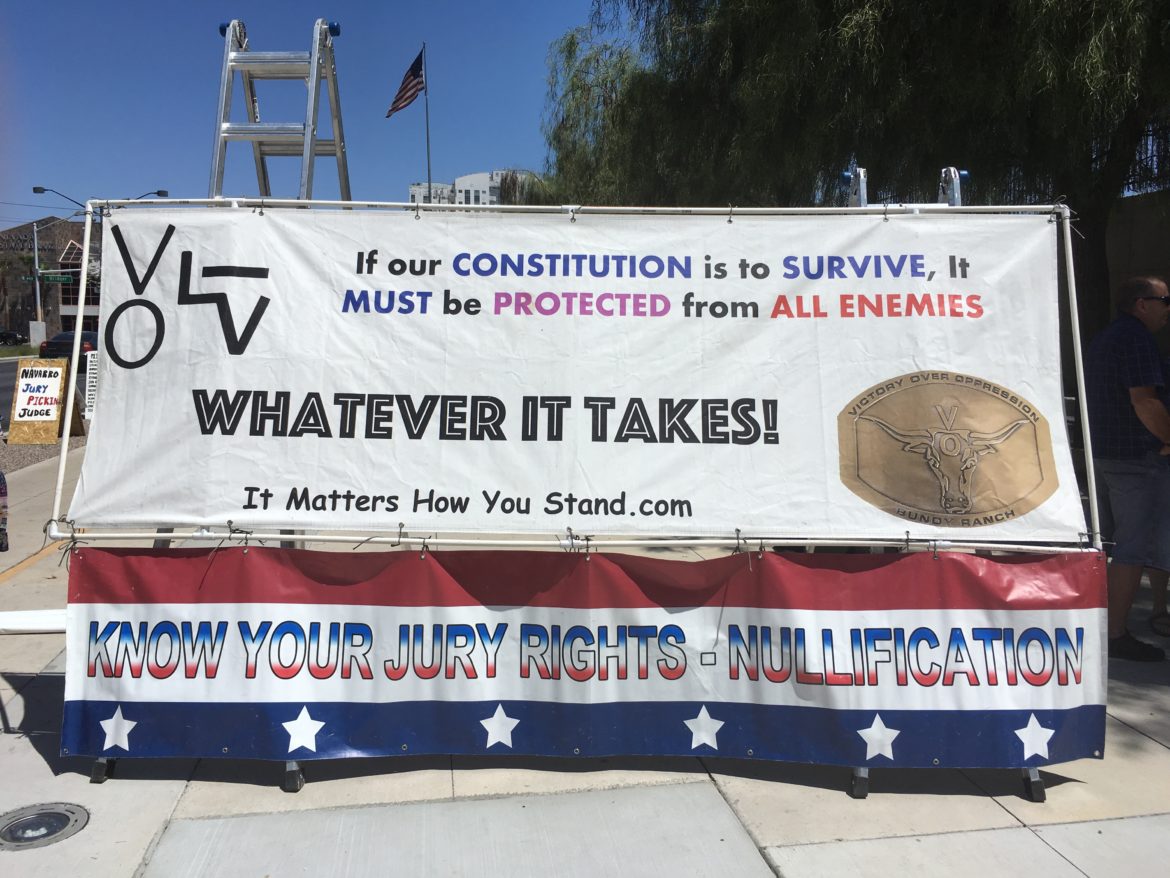 Last month a Las Vegas jury acquitted two men — Ricky Lovelien of Montana and Steven Stewart of Idaho — for their parts in the 2014 armed standoff between the federal government and supporters of rancher Cliven Bundy. The jury found co-defendants Eric Parker and Scott Drexler not guilty of most charges but deadlocked on some. When it comes to trying the Bundys and their supporters, federal prosecutors now have a terrible record, winning just two convictions after two trials of six defendants in Nevada this year. Last fall, Bundy’s sons Ryan and Ammon Bundy and five others were acquitted for leading an armed takeover of Oregon’s Malheur National Wildlife Refuge in early 2016.

The recent acquittals in the Nevada case raise big questions for prosecutors. Some legal experts say the nation’s current political climate, characterized by distrust of federal authorities, may help explain the acquittals. In some ways, the government itself, alongside the defendants, went on trial in the Las Vegas courtroom.

This story originally appeared on High Country News. It is reprinted with permission.

In 2014 a court had ordered the federal government to round up Bundy’s cattle, which were illegally grazing on federal land near Bunkerville, Nevada. Bundy, who holds a fringe belief that the federal government has no Constitutional authority to own land, felt the feds were overreaching. In the tense faceoff that ensued, hundreds of armed supporters forced Bureau of Land Management and National Park Service employees to abandon their jobs for fear of violence.

Many outside observers assumed the Bundys or their armed supporters would get prison time. Even friends of Bundy and other ranchers with similar disdain for federal land agencies told me in 2014 they thought the Clark County rancher had gone too far. But the Bunkerville trials have revealed the depths of Americans’ distrust in federal authority. The recent verdict was not a result of jurors’ sympathy for the Bundys, Lovelien’s attorney, Shawn Perez, concluded after speaking with them after the trial. “I think most of the jurors thought (Cliven) Bundy is an idiot for not paying the grazing fees,” he says. Instead, Perez credits the prosecutors’ failure to prove their case, as well as their overreaching tactics during the trial. “This is not a rogue jury. It is a failure of truth on the part of the government.”

Juries have long been influenced by cultural norms outside the courtroom. “In the 1950s, people were tried and criminally convicted for simply believing that Communism is a good idea,” explains Rory Little, a University of California Hastings College of the Law professor. “If a witness pointed at him and said ‘I know him to be a Communist,’ the jury would immediately convict…. In the 1960s there were civil rights cases where certain juries in certain states just wouldn’t convict a white person for interfering (with the lives of African Americans), and the government would try it again and again (in order to get a conviction).”

Jurors are instructed to use their “common sense” and lived experience when evaluating evidence. Today’s common sense includes a distrust of federal government for 80 percent of Americans. (That’s up from 66 percent in 2000 and 27 percent in 1958.) The Bunkerville standoff trials may have set off alarms for the average juror.

The most recent trial, which was a retrial after the first jury deadlocked, was marked by a persistent push-and-pull dynamic between the defense team and U.S. District Court Judge Gloria Navarro. The defense tried to describe their clients’ state of mind and motivations behind the standoff; Navarro repeatedly barred them from doing so, saying it was irrelevant to the charges. “I think the jury knew within the first few days that the judge was kind of cutting off the defense,” Perez says. “Even during opening statements, the government was objecting. It was at that point, three days into the trial, that (the jurors) realized they’re only going to get half the story.”

In final days of the trial, Navarro kicked Parker off the stand because he would not keep his statements within her court orders. Attorneys and observers were shocked into silence and Parker returned to his seat, buried his head in his hands and apparently began to cry.

“There is a philosophy among some defense attorneys that it plays to their advantage if it looks as if they’re not getting a fair trial because everything they’re trying to do is being shut down by the prosecutor or judge,” former District of Nevada U.S. Attorney Richard Pocker says. “I suppose in today’s environment in which our institutions are questioned and challenged more than 25 years ago, that (some attorneys) believe it has a better chance of succeeding.”

Constitutional law expert at the University of Nevada, Las Vegas, Ian Bartrum echoed this idea in an email: “Since transformative Supreme Court cases of the ‘60s, the public has become more and more aware of the power of the judiciary. As a result, there’s been kind of a political arms over appointments, which has resulted in more distrust. Couple that with recent conservative rhetoric, and Presidential rhetoric, and I guess you get the current climate.” In the Bunkerville trials, Navarro’s conflict with the defense team may have only exacerbated that distrust. Bundy supporters outside the courtroom have called Navarro “biased” for months. In a disturbing YouTube diatribe last week, a Malheur occupier said people should should go into the courtroom, “grab this judge by her ankles, drag her ass out and throw her in a fucking jail cell.”

Questions jurors asked during the trial illustrated how skeptical they were of the government, Perez says. After the recent verdict, at least one juror asked attorneys during a debrief session how heavily armed the BLM was during the standoff — information Navarro did not allow to surface in court. Other queries went unanswered during the trial because they strayed outside the judge’s orders as to what was relevant.

“When jurors are cut off from information and feel like they’re not getting a hearing from both sides, they have less respect for the proceedings,” says Lisa Ludwig, a Portland, Oregon, attorney who served as standby counsel for Ryan Bundy in the 2016 trial related to the Malheur National Wildlife Refuge armed occupation. “They’re less likely to go along with the push to convict.”

In the end, the narrative Bundy supporters pushed outside the Las Vegas and Portland, Oregon, courtrooms began to reflect what happened inside. It’s a compelling one: “The Bundys were arguing that the federal government is this insensitive monolith, and then you get into federal court and the way the case was presented kind of confirmed that,” Ludwig says. “Almost every witness they called was a paid government employee. There weren’t many regular people on their witness list,” Ludwig adds. Nevada lawyers followed a similar tack with witnesses. The result? “It sort of confirmed things that the defense was arguing.”

On the last day of the recent Las Vegas trial, all four defense attorneys quietly declined to give closing statements. “‘You wouldn’t let us say anything during the trial, why should we say anything now?’—that was the message from at least two of the defendants,” Perez says. The dozens of Bundy supporters who packed the courtroom that day got the message. “All 4 Defendants REFUSE Closing Arguments In Protest,” read a YouTube video from Parker’s wife and other supporters. There’s a good chance the jury got the message too.

“Do I think (the judge) was fair? No,” Perez says. “But I don’t know that many (federal trials) are.” Similar dynamics will likely come into play in the trial of Cliven Bundy himself, which is slated to begin Oct. 10. And in today’s political climate, that sense of unfairness — whether it comes from a kernel of truth or is a fabrication of courtroom theatrics — is an Achilles’ heel for the feds.