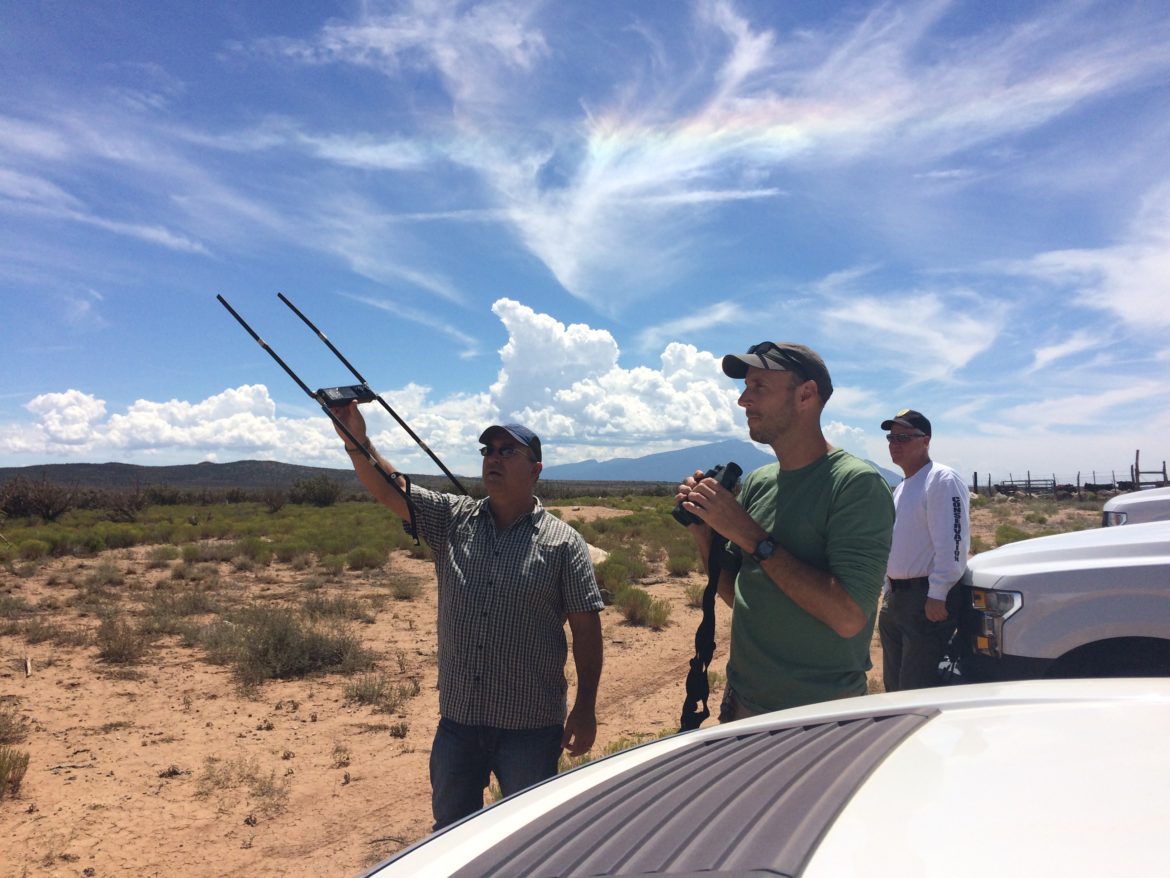 Peering through binoculars, Glenn Harper tries to spot the white rumps of pronghorn. The hooved mammals, sometimes mistakenly called “antelope,” are speedy—and hard to spot on an August afternoon atop Santa Ana Mesa.

Harper is the range and wildlife division manager with the Pueblo of Santa Ana’s Department of Natural Resources. After a few minutes, he and Dan Ginter, the pueblo’s range program manager, try an easier way to locate the herd. They pull out telemetry equipment, which picks up a signal from one of the animal’s radio collars. There’s a clump of pronghorn lazing near the tree line a few hundred yards away.

The species had been extirpated from the area about four decades ago. But over the course of three releases in 2009, 2010 and last winter, the department brought about 100 animals back to the pueblo. Some traveled off the reservation, a few died from the stress of being relocated, and predators killed others. All told, today there are now about 70 living within the pueblo’s boundaries, just north of Rio Rancho and Bernalillo.

And the tribe is working on more than just bringing back pronghorn.

courtesy of the Pueblo of Santa Ana Department of Natural Resources

“Culturally speaking, the Pueblo of Santa Ana has always had conservation (as part of) our lifestyle,” says Santa Ana Gov. Lawrence A. Montoya.

Protecting places like the bosque along the Rio Grande is important to everyone, he says—especially to tribal members, for whom the river is culturally important.

The pueblo doesn’t have a large land base, he says, and needs to take care of what it does have, including wildlife and special plants. “Whatever we’re left with here, Santa Ana is trying to maintain the ecosystem on our land,” he says. “We can’t control what’s off the reservation.”

Under the direction of the Pueblo of Santa Ana tribal council, the department is reintroducing wild turkeys, restoring the bosque along the Rio Grande, recovering grasslands impacted by heavy grazing and reintroducing healthy fire to the landscape. They also measure rainfall and other conditions, work with tribal ranchers to rotate livestock and install guzzlers and water tanks that wildlife and migrating birds can visit.

The water features are visited by an array of bird species

More than ten years ago, the tribe also created its own wildlife conservation code. The tribally-administered code is similar to the state’s hunting and fishing rules. The Santa Ana Conservation Enforcement Division patrols within the tribal boundaries to keep out trespassers and enforce the pueblo’s hunting regulations.

That’s a lot of land for one person, Harper says, but it’s not much for an entire tribe which relies on wildlife and plants to maintain its culture.

Development from Rio Rancho, Bernalillo and Placitas presses up against the tribe’s lands, more than 90 percent of which the tribal council has kept free of development. Tribal leaders, he says, protect their land to preserve the tribe’s cultural identity.

The pueblo has experience trying to protect its lands. Centuries of experience.

More than five hundred years ago, the people of Santa Ana, or the Tamayame, moved across millions of acres of lands in central New Mexico. Some of their settlements ranged from Paak’u on the east side of the Sandia Mountains to the west bank of the Rio Puerco, from where the city of Socorro is today to north of Angostura along the Rio Grande.

In 1540, when Francisco Vasquez de Coronado arrived, seeking gold and demanding “hospitality,” there were about 80 pueblos from Hopi to Pecos, and Taos to Socorro. Records are spotty from that time, especially as the Spanish, or Kastera as called by the Tamayame, made little distinction at first among the different pueblos, languages and cultures.

By 1692 when Diego deVargas came, that number dropped to below 30.

At the end of the eighteenth century, there were about 19,000 Kastera living in New Mexico, writes Laura Bayer in her 1994 book, “Santa Ana: The People, the Pueblo, and the History of Tamaya.”

“Such rapid growth required vast amounts of land and water,” she writes. “Even as early as the 1690s, it was clear that the unclaimed lands and water of New Mexico might not meet the needs of the new towns and forts, the farmers, and the herds of livestock that would need extensive pastures.”

In 1680, she wrote, Spanish law set the rights of native people to keep their lands and waters. But for Santa Ana, that meant only the square of land around Tamaya, their village. Lands they relied on for farming, hunting and gathering plants were not included.

At the same time the Tamayame were dealing with the arrival of more Spanish settlers seeking more land and water, dying from exposure to European-brought diseases like measles and smallpox and becoming increasingly vulnerable to raiders, the pueblo also began buying back from Spanish settlers those lands they had used for centuries.

According to Bayer, the first purchase was in 1709 for lands near the mouth of the Jemez River from Manuel Baca. People continued to pool their resources—livestock and trade goods—to buy back their traditional lands through the late 1760s, when the pueblos of Santa Ana, Zia and Jemez even bought a joint grant together.

When Mexico gained its independence from Spain in 1821, native people became citizens of Mexico. But with the reorganization of the church, schools fell into disrepair and decades of chaos ensued, writes Bayer. After independence, Mexico’s officials disregarded the pueblo’s needs and the Kastera laws that had protected the pueblo’s claims to their own waters and lands.

Then, just two decades later, the U.S. declared war on Mexico, again upending life for the pueblos and subjecting people to new laws. Pueblo people weren’t granted citizen status, and it took until 1869 for Congress to confirm Santa Ana’s original grant of land—where three non-Indian families continued to live—but not the lands it had spent the 18th century buying back.

Like all pueblo people, the Tamayame spent the nineteenth and twentieth centuries trying to maintain their culture, while also trying to hold on to their lands and waters. That became increasingly difficult as the population of the Rio Grande Valley continued to explode.

Today, the pueblo is still trying to reclaim some of its traditional lands.

Last year, the tribe bought 66,000-acres that was the King Ranch in Rio Rancho, and plans to expand its wildlife and restoration projects onto those lands. It would like the U.S. Bureau of Land Management to protect a nearby area, called the Buffalo Tract, from development, including sand and gravel mining.

From atop Santa Ana Mesa, it’s easy to envision a time before the centuries of upheaval.

On an August afternoon, dark-blue-to-black monsoon clouds lurk over the Jemez Mountains toward the north, and gray rain lines streak down from the sky above the Rio Puerco Valley to the west. The Sandia Mountains rise in the distance, but Albuquerque and Rio Rancho are hidden from view.

Large parcels of lands unbroken by housing developments, highways and power lines are important to wildlife.

That’s why the pueblo’s Department of Natural Resources is also tracking mountain lions and bears on tribal land. Currently, the department is collaring a few of each species in order to track where they go and see how they affect other wildlife species living on the pueblo.

“At this point, there are at least three mountain lions using this area, and there are probably more we haven’t picked up on,” Harper says. One of the lions they’re tracking has a diverse diet. They’ve found his kill sites, and knows he eats porcupines, badgers, coyotes, elk, feral domestic sheep and, sometimes, pronghorn.

courtesy of Pueblo of Santa Ana Department of Natural Resources

Tracking the movement of the lions also shows how big their range is, and why it’s so important for the predators to have unfragmented habitat.

They found one male lion was making a huge loop: from the south end of the pueblo, he was roaming north to Tent Rocks in the Jemez, traveling back down along the edge of Santa Ana Mesa toward Jemez Canyon Reservoir—and then circling back around again. Another moved between the Jemez River and the Rio Puerco Valley. Between early May, when they collared the animal, and mid-August, they had tracked the lion crossing Highway 550 a total of 38 times.

To find what they need to survive, the lions need a lot of land. And so do people trying to protect their culture.

Harper points out that the ancestors of the people who today live at Santa Ana moved out of Chaco Canyon in northwestern New Mexico because of a crippling drought in the eleventh century.

He also hopes that, thanks in part to the restoration and wildlife work the tribe is doing today, this landscape will be resilient enough to adapt to the changing climatic conditions.

“If I could come back in 200 years, I would like to see the landscape in better shape than it is now,” he says, “and a community that has everything it needs to survive.”

To watch last Friday’s episode of Our Land New Mexico that aired on New Mexico PBS about the restoration efforts at the Pueblo of Santa Ana, visit here. You can also learn more about the series at the New Mexico In Focus website.