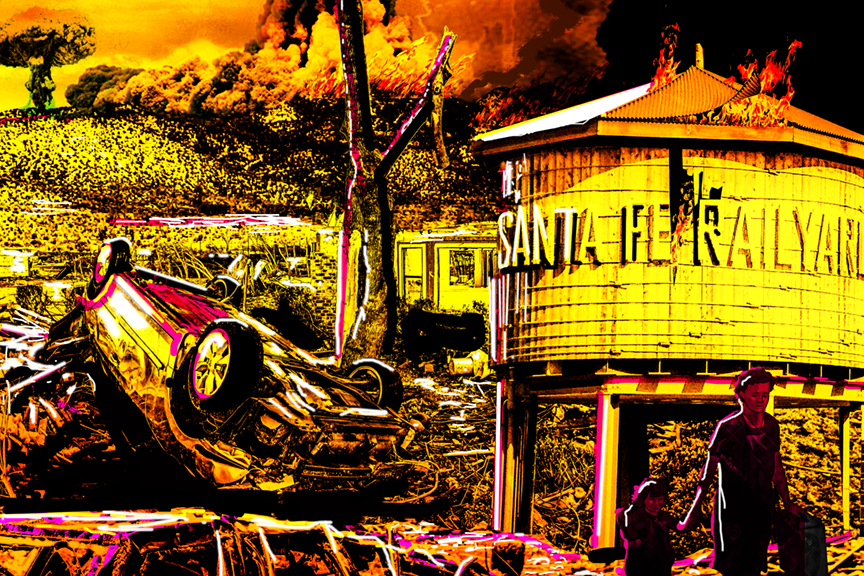 As the city of Santa Fe’s emergency management director, it’s his job and, though that last one might sound goofy, the Centers for Disease Control and Prevention a few years ago created a graphic novel about a zombie pandemic moving across the country.

Silver chuckles at the campaign. It was a great way to get people thinking about emergency preparedness, he says. Whether preparing for roving bands of the recently reanimated or a natural or human-caused disaster, the steps are the same: have a communication plan, keep an emergency pack on hand and know who to trust.

This story was reported in partnership with the Santa Fe Reporter. A version of this story appears in the Sept. 13 edition of the paper.

“It doesn’t matter what the emergency is; the response is going to be very similar,” says Silver. That goes for not only for households but also for emergency responders and the government agencies that help communities recover. The city of Santa Fe, for instance, has a hazard mitigation plan for how it and its partners would respond to anything from a catastrophic flash flood churning down the Santa Fe River to a nuclear explosion.

Hurricane Irma whaled on Florida after obliterating homes, forests and communities in the Caribbean. The storm came just a week and a half after Hurricane Harvey hit Texas. In the Houston area, as the rains kept falling and falling, water inundated homes and submerged entire neighborhoods. People worried about what was in the water—not to mention the air, as petrochemical facilities flooded and even exploded.

During the storms and their aftermaths, as with any emergency, stories of individual heroism and grace emerged.

No hurricanes will slam New Mexico, of course, but near-equivalents lurk in our drying forests, our two nuclear laboratories and our snowmelt-fed rivers—especially as impacts from climate change challenge not just water managers and farmers, but also public and mental health providers.

After years of promises, questions still remain at the state agency about how some of its top staff members manage grants and finances, how it’s spending money and if it’s still holding on to FEMA money that should be passed along to the local governments and tribes that the cash is intended to help.

Just last week, the Office of the State Auditor received the DHSEM’s 2016 fiscal year audit from independent analysts. It was more than nine months late.

The state agency’s 2015 audit, full of holes and question marks, came in nearly a year late. And it appears to show that staff leadership was either unwilling or unable to share the information accountants needed to understand what’s happening with its finances and grants. Auditors found 19 significant problems and noted that “little progress” was made in spreading FEMA money around. That money is critically important: Most of DHSEM’s budget comes from the federal government. In 2017, the agency’s entire annual budget was $17.7 million, nearly $15 million of which came from the feds.

But in 2015, it was still holding onto $34 million allocated for emergencies that dated back to 2007.

Until the 2016 audit is made public, it’s unknown how much money the department still needs to pay out for recovery from past disasters. The agency did not answer questions or make its experts available for interviews.

That sort of secrecy, along with chronically late audits, leave New Mexicans in the dark about what would happen if a disaster struck tomorrow.

“Getting aid to people and businesses in times of need is the purpose of this agency,” state Auditor Tim Keller told NM Political Report. “It’s an absolutely critical department, especially because the public trust is based on them stepping up when people need help, and in a timely manner.”

“We want it reviewed and out the door, to bring some accountability and transparency,” he says, adding that the agency’s 2017 audit is due in three months.

“If something more catastrophic were happening in this state, all of a sudden these issues would be front and center, and would be the number one priority of every elected official,” Keller says. “Folks have to realize, this is one area you can’t go in after and work on this. You have to have it fixed beforehand.”

The agency has blamed high staff turnover and vacancies for some of the problems. But rather than hiring employees to fill those positions, it appears to be farming out the work to contractors. Typically, it costs an agency more to pay a contractor than to hire a full-time employee with benefits.

Since 2014, the agency has also spent more than a half-million dollars on outside accounting firms and another $1.1 million on IT services.

After a governor declares a disaster and FEMA allocates funding, state and local governments also pony up money for matching grants. Then, once a project is done and inspected, FEMA pays the state using a special account. “As expeditiously as possible,” according to the agreement between the state and the feds, it’s supposed to send money to the local agency.

In New Mexico, the process is cracked. In 2013, when severe monsoon storms flooded some Pueblos, several tribes were still waiting on millions of dollars from FEMA that had been allocated for disasters that occurred in 2011 and 2012. That year, the Pueblo of Santa Clara ended up making an agreement with FEMA that allows the tribe to bypass the state agency.

And in 2016, the contractor who completed disaster cleanup work at Nambé Reservoir a year and a half earlier faced losing his business because the state still owed more than $2 million for the work. FEMA had already paid DHSEM, but the state hadn’t passed the money along. Eventually, media coverage drew the attention of U.S. Sen. Martin Heinrich, who pressured the agency to finally cut the check.

While Keller lacks enforcement power, FEMA does not.

If a state fails to properly account for its federal money, FEMA can suspend drawdowns from the special account. And within a three-year window, FEMA can claw back money the state hasn’t passed through to subgrantees.

It remains to be seen how the Trump administration will oversee states with grant funding, especially given the gargantuan tasks ahead of FEMA this hurricane season, and with more than 1.6 million acres of wildfires currently burning in the western United States.

The root of the problem

After Harvey hit Houston, New Mexico Rep. Bill McCamley, D-Mesilla, volunteered at a Red Cross shelter in San Antonio, Texas. Nonprofits, churches and individuals stepped up in Texas, McCamley says. “It can show us how really good people are, in the best way possible. … But helping out after an emergency is one of the basic things government should do.”

The government also needs to do something about climate change, he says: “It’s real, we’re causing it.”

That’s a lesson millions of Americans learned firsthand this month.

Scientists hesitate to attribute individual events or storms to climate change, but warmer oceans strengthen hurricanes. Irma, a Category 5 storm, was among the strongest ever recorded in the Atlantic Ocean. Harvey dropped more than 50 inches of rain in five days, a record for the continental U.S.

Here in New Mexico, which is the sixth-fastest-warming state in the U.S., average summer temperatures are about 2 degrees Fahrenheit warmer than four decades ago.

We don’t get hurricanes, but do experience wildfires and post-fire floods. Droughts are getting warmer and groundwater levels are dropping in many areas of the state. Warming strains rivers and reservoirs by increasing evaporation and decreasing soil moisture, which means crops and forests both need more water to survive.

Recovering from any type of emergency—and limiting those cascading failures—requires functioning and trustworthy government agencies.

The financial problems at DHSEM are just a symptom of a larger problem in New Mexico, McCamley says. “Really, once again, this echoes issues of mental health and food stamps and higher education,” he says.

Many state agencies already can’t meet residents’ basic needs, and there’s no better issue than disaster response to highlight the importance of functioning, resilient government agencies that have the funding and staff they need.

“Once people have been rescued and families are safe, how do you rebuild infrastructure? How do you rebuild homes and get businesses functioning again?” McCamley says. “These are hard and complicated issues, and we have to make sure government functions at at least a basic level, or else this other stuff becomes impossible to figure out.”

If New Mexico’s state agencies aren’t fully staffed and functioning now, how can they help people during and after a real emergency?

“When we continue to demonize government and not provide departments and agencies the resources they need to function, this is what we get,” McCamley says, speaking of an anti-government attitude that has been building in America for four decades. “We need to realize in this county that government has an important role, a needed role,” he says. “We need to take it seriously.”

We received a note from the deputy secretary for the New Mexico Department of Information Technology, who pointed out that the Sunshine Portal is working correctly and the employment data that was previously online at the site is no longer there.  He wrote: “In 2013 a Court Order required DoIT to removed the names of classified employees from the Sunshine Portal. As this is public information, the Governor’s office worked with our agency to post employee information to this new site. This information was updated August 1, 2017 with the new round of updates happening this week.” The employment data is available and updated at: employees.newmexico.gov