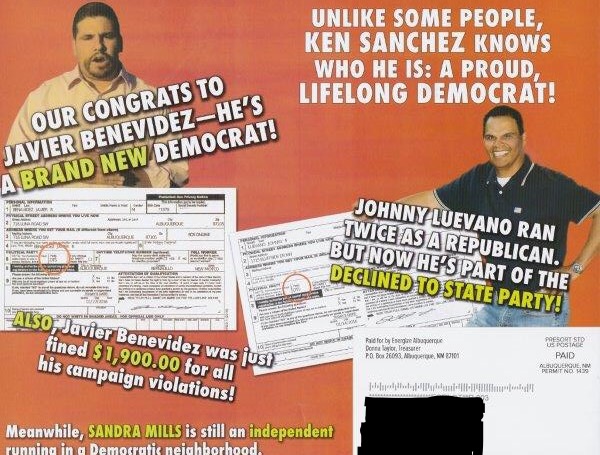 A new Santolina backed political committee popped up an electronic billboard and sent out mailers on Albuquerque’s west side late last week to support the re-election bid of City Councilor Ken Sanchez.

NM In Depth reached out to Donna Taylor, whose email is listed on the committee report, and Garrett, to ask them why they support Sanchez. This report will be updated if we hear from them.

The billboard and mailers circulating on the west side aim to make sure residents know Ken Sanchez is a Democrat, juxtaposing him with his three opponents who the mailers proclaim to be either new Democrats or Independents running in a Democratic community.

“The only real democrat running for city council district 1 is Ken Sanchez,” the billboard proclaims.

The mailers proclaim Sanchez a “proud Democrat” and take aim at his opponents, Sandra Mills, Johnny Luevano Jr, and Javier Benavidez, for either being “brand new” or not Democrats at all.

Mills said she hadn’t seen either of the ads and couldn’t comment on it, but stated that she is an independent.

“Yes, I’m an independent, and I walk through the neighborhood and it’s divided,” Mills told New Mexico In Depth.

The mailer paints Luevano’s decision to decline to state his party affiliation as negative. Luevano doesn’t have a problem with the statement, it’s the fact that it’s negative that concerned him.

“I don’t like being stretched out on a flyer like that, but it’s factual,” said Luevano. “I’ve been DTS since 2000.” He said if there was an option to run as an independent he would have.

“I’m a little confused as to why they’re [Energize Albuquerque] attacking me.” Luevano said. “Partisan politics get nasty. It’s ridiculous of them to make a mockery of public policy and politics.”

The mailer went after Benavidez for being a “brand new” Democrat and criticized him for violating campaign rules. Benavidez was required to pay a $1,900 fine for a number of improper collections of the $5 donations he was required to collect in order to qualify for public financing.

Benavidez said that he changed his party status previously because he was interested in seeing different campaign mail during the 2016 election season. “My values have never changed,” Benavidez said.

“I actually welcome this dialog and I think it’s a great chance to talk about what it means be a Democrat,” Benavidez said in response to the mailer and the billboard.

Benavidez claimed that Sanchez was less of a Democrat because he voted to cap the minimum wage and supported a study that delayed the sick leave initiative.

“A lot of people think he’s a Democrat…but when it comes to his policies he acts very much like a Republican,” Benavidez said.