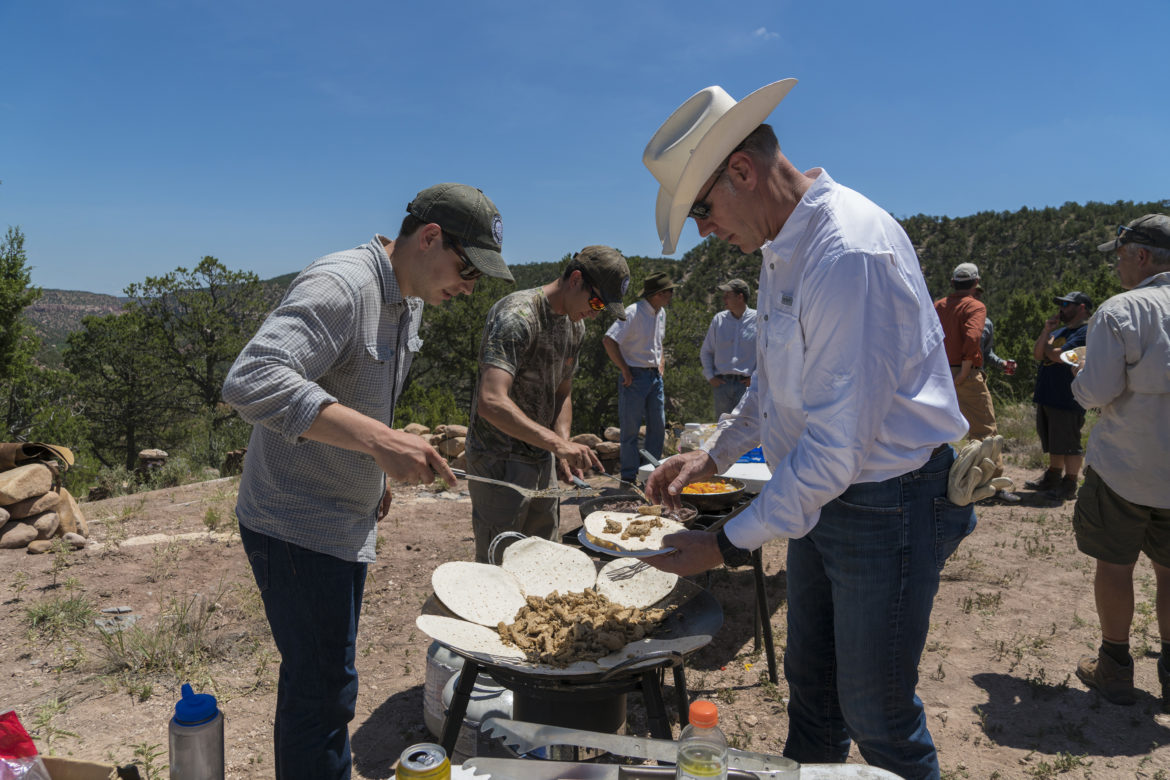 U.S. Department of the Interior Secretary Ryan Zinke during his visit to New Mexico in July

Earlier this week, the Associated Press reported what t U.S. Department of the Interior Secretary Ryan Zinke’s told the National Petroleum Council in a speech. The secretary said he was working to make the agency’s regulatory culture more business friendly, and admitted that he knew going into the agency that about one-third of its employees are “not loyal to the flag.”

He also said he was planning to move leadership of some agencies, including the Bureau of Reclamation and the Bureau of Land Management, out of Washington, D.C. and into western states:

The moves follow military strategy, Zinke said: “Push your generals where the fight is.”

While details remain largely under wraps, Zinke said he was excited.

“It’s going to be huge,” he said in a speech to the National Petroleum Council, an advisory committee that includes leaders of the oil and gas industry. “I really can’t change the culture without changing the structure.”

During that same speech, Zinke also said of hydraulic fracturing: “Fracking is proof that God’s got a good sense of humor and he loves us.”

Typically, such soundproof booths are used to conduct hearing tests. But the EPA sought a customized version — one that eventually would cost several times more than a typical model — that Pruitt can use to communicate privately.

“They had a lot of modifications,” said Steve Snider, an acoustic sales consultant with the company, who worked with the agency on its order earlier this summer. “Their main goal was they wanted essentially a secure phone booth that couldn’t be breached from a data point of view or from someone standing outside eavesdropping.”

Pruitt had already requested additional security and he avoids the use of email, doesn’t publicly post his appointment calendars as past administrators have and requires employees to leave behind their phones and electronic devices before meeting in his office.

It’s nearly impossible to keep up with the news coming out of Los Alamos National Laboratory these days.

In the first incident, workers mishandled plutonium metals, in violation of federal regulations for nuclear safety, according to the report. In the second, just 11 days later, nearly a dozen workers were exposed to alpha particles, causing radiological contaminants to coat at least one worker’s knuckle, and to contaminate the other workers’ protective clothing and booties, as well as parts of the building. It is unclear how significant the contamination issue is for the workers’ health.

In the second incident, which occurred on August 18, workers caused a “criticality safety event” but didn’t realize that fact until three days later. Instead of alerting management and evacuating, according to the story by Rebecca Moss, the workers “first conducted two additional nuclear material movements that they felt were necessary for product quality and security.”

Last year alone, workers caused 23 criticality events, Moss wrote, adding that Los Alamos is the only nuclear facility, out of more than 20 nationwide, to receive a failing grade for its criticality safety program in 2016.

These violations come as the U.S. government, including the New Mexico congressional delegation, has continued its support for nuclear pit production at the lab.

Also at Los Alamos, the contract for cleaning up nuclear waste is up at the end of September. But an extension is expected, according to a report by ExchangeMonitor.

Los Alamos National Security (LANS), the laboratory’s management and operations prime, is at the tail end of a two-year “bridge” contract for legacy nuclear cleanup worth nearly $310 million. LANS has performed the work since 2006, but appears unlikely to win the next contract after a 2014 radiation release at the Waste Isolation Pilot Plant near Carlsbad, N.M., was linked to a drum of improperly packaged radioactive waste from Los Alamos.

However, the contractor – a partnership of Bechtel National, BWX Technologies, AECOM, and the University of California – could stay on for an interim period as it completes processing of dozens of additional containers of waste, some of which contain the combustible mix of nitrate salts and organic kitty litter. Workers are adding an inert substance to the drums’ mixture of to prevent another radiation incident.

This week, the Santa Fe Reporter also covered the radioactive waste a private company has left behind in southwest Santa Fe—less than 500 feet from Sweeney Elementary School. According to the story:

Until a decade ago, the Eberline plant made radiation detection equipment that it shipped to nuclear facilities all over the world. The plant’s founder, Howard Clayton Eberline, had imagined in the 1950s that Santa Fe would supply the instruments to facilitate the nuclear energy revolution.

The facility’s trajectory from the front lines of this industry to a poison-packed shell on the city’s edge is as much a story about local industrial decline as it is about a lack of accountability. A review by SFR of half a century’s worth of newspaper reporting as well as records from the state Environment Department suggest that Eberline’s role as a large employer and the stature of its corporate leadership allowed it to cut corners.

If you weren’t able to attend the Second Annual Four Corners Science Forum on Methane in Durango earlier this month, the Four Corners Air Quality Group has posted its meeting documents online. The meetings are focused on the methane anomaly, or hotspot, over the Four Corners. Visit https://www.env.nm.gov/air-quality/fcaqg/ and then select “meetings.” There are updates from Colorado and New Mexico agencies, as well as survey results and monitoring reports.

Lastly, teachers at public or public-charter schools can apply to New Mexico State Parks for transportation grants for the 2017-2018 school year and bring their classes to any of the state’s 34 state parks for outdoor classroom study.

Information is available online at http://www.emnrd.state.nm.us/SPD/ The deadline is Oct. 6.