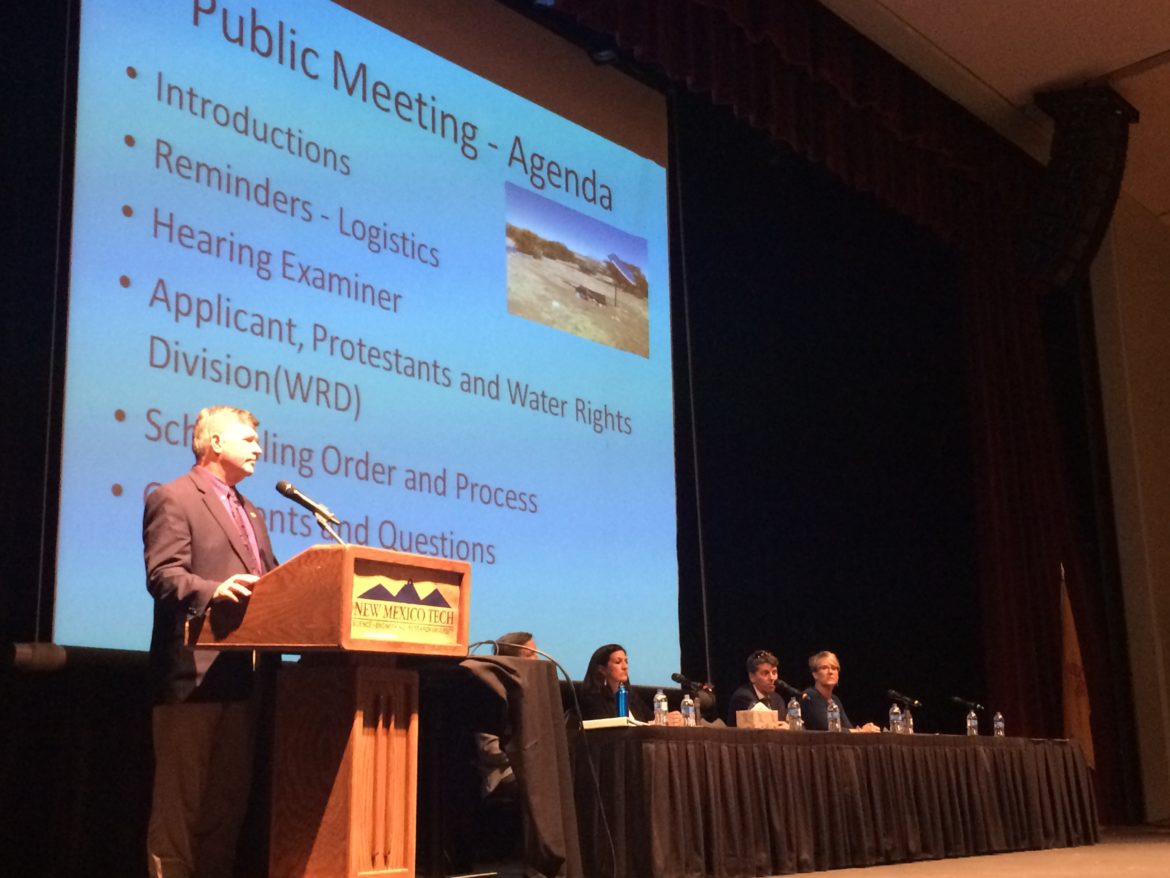 For about a decade, tensions have flared over a proposed water project in southwestern New Mexico. Last year, Augustin Plains Ranch, LLC filed the third version of its application with the New Mexico Office of the State Engineer, requesting permission to pump 54,000 acre-feet—more than 17 billion gallons—of water each year from the aquifer and pipe it to the Albuquerque area. If approved, the company would draw water from 37 wells, all in sparsely-populated Catron County, near the town of Datil.

But at a public meeting in Socorro Thursday night, the scene was subdued.

Opponents of the proposed San Augustin Plains water project filled an auditorium at the New Mexico Institute of Mining and Technology, and New Mexico State Police officers kept an eye on things inside and outside the Macey Center.

State officials deflated emotions by keeping the meeting’s agenda focused on process, rather than issues related to the application pending before the state, and by limiting public participation to written questions and comments and not allowing attendees to speak before the crowd.

During the meeting, State Engineer Tom Blaine, the state’s top water official, and hearing officers Kevin Myers and Maria Sanchez-Gagne, outlined the process and schedule for the hearing, which is expected to stretch into mid-2019. The procedure is similar to that of a district court civil case, with witnesses, depositions and discovery. At the end of that process, the state engineer will decide whether to approve, deny or partially approve the application.

Once the state engineer has made a decision, parties can appeal, which would move the issue to state district court.

There are three parties involved, including the applicant, people and organizations officially protesting the application and the Office of the State Engineer’s water rights division. Independent from the hearing unit, that division is required, Myers explained, to look at how all water rights users in the area might be affected, not just those who have filed protests against the application.

After the latest version of the application was released, about 600 people filed “timely” protests. The state dismissed more than 230 of those protests because people failed to pay the required $25 fee. Another 108 protestants didn’t include a valid address and will also be disqualified if they didn’t rectify that problem before Thursday.

Following the presentation, and after repeatedly reminding the crowd they could only answer questions related to the hearing process, Myers and Sanchez-Gagne spent about an hour reading the submitted questions aloud, sometimes having to decipher handwriting or recite what would have likely been impassioned comments.

Some questions were related to the process—if, for example, documents could be sent via email instead of the postal service. Officials couldn’t answer a question about who would pay to drill new wells if existing domestic wells dried because of the development. Another unanswered question had to do with whether the aquifer had been mapped and modeled. A few people asked how the state would protect senior water rights or determine if those water rights had been harmed, or “impaired,” by the drilling.

Some cards contained only statements, including one from a Catron County rancher who wrote that if the application were approved people “will be forced to defend ourselves.” Randall Major, of New Mexico Cattlegrowers’ Association, wrote “this has been going on for ten years and should be put to an end now.”

Twice, the state has rejected the company’s application for the project, first in 2012 and then in 2014.

Some comments, including those criticizing the “multinational corporation,” calling the meeting a “dog and pony show” or complaining about the lengthy hearing process elicited smatterings of applause from the attendees, or the occasional, “amen!”

But some members of the mostly older crowd trickled out of the meeting, while others who stayed just mumbled their dissatisfaction.

At the end of the evening, Blaine took the podium again. Two hours into the meeting, only about 60 people were left in the auditorium—less than half the crowd from when the meeting began.

“You can see that the focus was directed to the process, and the process that we have is governed by our state statutes,” he said, adding that the state’s water code is more than a century old. “It’s been developed in the state to encourage applying water to beneficial use, but also to ensure that existing rights, senior rights, are protected, and we will above all, make our decision in accordance with state statutes, because that is the fair thing to do for all of us.”

On their way out, Pete and Eva Dempsey of Datil said the meeting was a waste of their time. They’ve already seen their water table drop by about ten feet in the past year, even without additional development in the area.

If the application is approved, Pete Dempsey said, “people are not going to sit around. We don’t want to see that kind of change.”

Joan Brooks, also of Datil, echoed the Dempseys’ opposition to the project.

“My feeling about trying to develop this water: why do we want to drive more people into a state where there is no water?” she asked. “We’re a desert. It’s just so insane.”

The Augustin Plains Ranch application is online at: http://www.ose.state.nm.us/HU/AugustinPlains.php