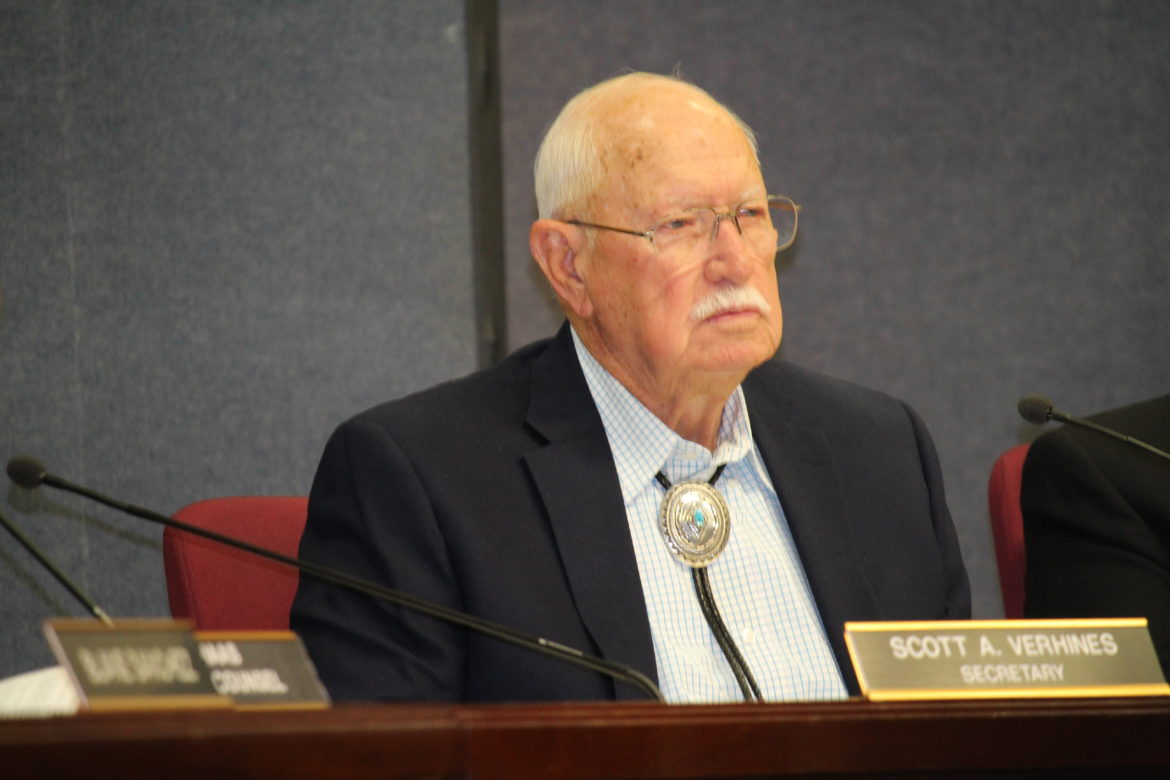 Jim Dunlap at an Interstate Stream Commission meeting in November 2014

In his resignation letter, Dunlap wrote that he was leaving the ISC with “great concern for lack of direction from the State Engineer and adherence to New Mexico State Statutes.”

“I felt like our state engineer was trying to take over and be totally in control of the ISC and wouldn’t let us do our job in the sense that the statutes call for,” Dunlap said. “He fires our director without any of us knowing why or anything—and she was working out quite well, I thought. But she didn’t take orders from him, and he didn’t like that, and he up and fired her.”

The commission consists of nine directors by the governor, including the director of the ISC and the state engineer, who serves as secretary. The agency also has a staff of attorneys, engineers, hydrologists and others. Its mission is to “investigate, protect, conserve, and develop New Mexico’s waters,” and it also ensures the state complies with interstate river compacts.

The agency is intertwined with the Office of the State Engineer (OSE), but the two have distinct responsibilities, which sometimes conflict. OSE has authority over surface and ground water, issuing permits to drill for water and approve or deny water rights transfers. Created even before statehood, the state engineer wields enormous power—power that was consolidated under Steve Reynolds, who reigned in that position from 1955 until 1990.

“You can’t work that way”

Gov. Susana Martinez appointed the current state engineer in late 2014. An agricultural engineer, Tom Blaine was appointed in 2012 as Division Director of New Mexico Environment Department’s Environmental Health Division, working under then-Secretary Ryan Flynn. Before that, he owned a construction contracting company and worked at the New Mexico Department of Transportation and the City of Albuquerque.

Dunlap pointed to Blaine’s actions as the reason he left the ISC.

“We have been struggling ever since we’ve been there, trying to delineate our jobs and separate it from the Office of the State Engineer, and he thinks we’re a program of his, other than an agency which the statutes say have separate and distinct jobs,” Dunlap said.

Dunlap said he advocated for a meeting in which the ISC, OSE and each agency’s attorneys could “freely discuss the statutes and come to a conclusion (of), ‘This is what we should be doing, and this is what you should be doing.’”

Blaine refused, Dunlap said, and the issue was removed from a recent meeting agenda.

“As a past chairman, I did everything I could to keep meetings open and not do things like that,” he said, adding that the ISC has been accused of Open Meetings Act violations in the past.

Dunlap said ISC Chair Caleb Chandler, who also resigned this week, also had unsuccessfully tried to meet with the governor.

“When I was chairman and needed to talk to Bill Richardson, I called his office and was let in anytime,” Dunlap said. “But Caleb Chandler hasn’t been able to get the governor to talk to us.”

Chandler is a retired Clovis police officer and former New Mexico state senator. He also served as a Curry County commissioner and a magistrate judge. In 2015, Martinez chose his son, Matt Chandler, for a seat on the University of New Mexico Board of Regents—but the Senate rejected his nomination. Martinez then appointed the younger Chandler to a District Court judgeship.

Dunlap said three of the commissioners had scheduled a meeting with the governor earlier this year.

“We got there and according to her staff, she was detained somewhere. I can understand that, but we were there an hour and 45 minutes, and she still didn’t show up,” he said. “It’s unbelievable to me that a governor would operate that way. You can’t work that way, and that’s all there is to it.”

In his resignation letter, Dunlap invited Martinez to contact him for a meeting. As of Thursday evening, she had not responded.

Dunlap, who served on the ISC under Govs. Gary Johnson, Bill Richardson and Susana Martinez, joked that his resignation surprised him as much as anyone else. But he said he just couldn’t be associated with the commission any longer.

During a hearing of the legislature’s Water and Natural Resources Committee in Socorro on Thursday, Sen. Joseph Cervantes and Senate Majority Leader Peter Wirth had questions, though not many answers.

“The resignations of the key staff, and now the sudden and immediate resignation of board members, clearly indicates deep problems in this crucial part of state government,” Cervantes said. “It comes the same week New Mexico has been handed decisions favoring Texas and the United States, and against New Mexico, in the United States Supreme Court. And it comes the same week as reports that over $10 million has been spent on the Arizona Settlement planning for the Gila River, but with little progress to show for that massive spending.”

In 2013, Texas sued New Mexico and Colorado in the U.S. Supreme Court, alleging that New Mexico was taking water that legally should flow to Texas under the terms of the 1938 Rio Grande Compact by allowing farmers to pump groundwater connected to the river.

Were the Supreme Court to side with Texas, it could force some southern New Mexico farmers to stop pumping groundwater. Or, the state could even wind up paying Texas up to $1 billion in damages

The complexity of the Texas v. New Mexico lawsuit requires “appointments up to the task,” said Cervantes, who chairs Water and Natural Resources Committee and is also running for governor. “These sudden resignations of the ISC Board and staff indicate deep disagreement with those still in charge of our water resources.” He added that they indicate that “deep leadership voids have been exposed” in New Mexico.

“These board members’ resignations are extremely concerning, and the timing of this is terrible,” Senate Majority Leader Peter Wirth said. “New Mexico has to have a functioning ISC, and we need the state engineer to be collaborating with the ISC, not fighting, which is apparently where we are.”

Wirth said he is concerned about the statutory violations to which Dunlap alluded in his resignation letter. “The Legislature’s going to want to know what those are, and what exactly is happening here, that led to these three appointees of Gov. Martinez to resign in this manner.”

To avoid “wild political swings,” members should be appointed by the legislature and the governor, and come from a variety of backgrounds, he said. The board’s membership should reflect the mission it’s been given in statute.

The latest developments are particularly striking, Wirth said. “The scenario now, with Governor Martinez’s appointees resigning, we’re into a different power struggle, between the ISC and the State Engineer,” Wirth said. “I think we’re going to have to look carefully at the statutory authority granted to these two offices.”

Like many people across the state who track water issues, Wirth seemed shocked by the resignations, especially Dunlap’s.

“I’ve never seen this level of tension between the State Engineer and the ISC in the 13 years I’ve been in the Legislature,” he said. “We’re in new territory.”

In 2014, former ISC director Norman Gaume sued the agency for violating the Open Meetings Act. His suit alleged that the commission routinely violated the state’s law on open meetings and transparency while making decisions about a diversion on the Gila River.

Even then, there was tension between the ISC and the OSE, said Brian Egolf, Gaume’s attorney on that case. Egolf, a water attorney with Egolf + Ferlic + Harwood, is also the Speaker of the New Mexico State House.

“It was clear to me in the case that the ISC lawyers at the time thought they were not under the direction of the state engineer, and the state engineer lawyers felt very differently,” he said. “But the ISC lawyers were forced to make an argument against the agency in order to avoid liability that flows from the Open Meetings Act violations.” At the time, he said that he thought that the ISC was getting caught in a “bad spot.”

The ISC has its failings, Egolf admitted—mainly, that because the agency’s members are all appointed by the governor, it can’t really be considered “independent.” That’s something he and some other legislators are hopeful they can finally address in the next 60-day session, in 2019.

The ISC is a critically important agency for water in the state, he explained.

“It’s the people’s only window into the way policy is made that affects our state’s most precious resource, and the only opportunity the public has to see what the state is wanting to do with water and water policy and water spending,” he said. “Even though it’s not a perfect window and a perfect process, it’s the only transparency that exists in state water policy and projects like the Gila diversion.”

The Office of the State Engineer, he explained, is not as transparent an agency. The office uses its own discretion, rather than state statutes, to apply particular guidelines to things like well-drilling applications or water rights transfers, in different parts of the state. The decision-making, he said, is arbitrary and undemocratic.

“If you want to do any kind of water rights transfer, you’ve got to hire a team of lawyers who have done a bunch of them before, and then try to get those lawyers to convince the agency to apply one guideline over the other,” he said.

With the ISC, he said, things work differently: decisions have to be made in public meetings, pursuant to public notice. ISC employees give detailed reports during the monthly meetings, which the public can attend.