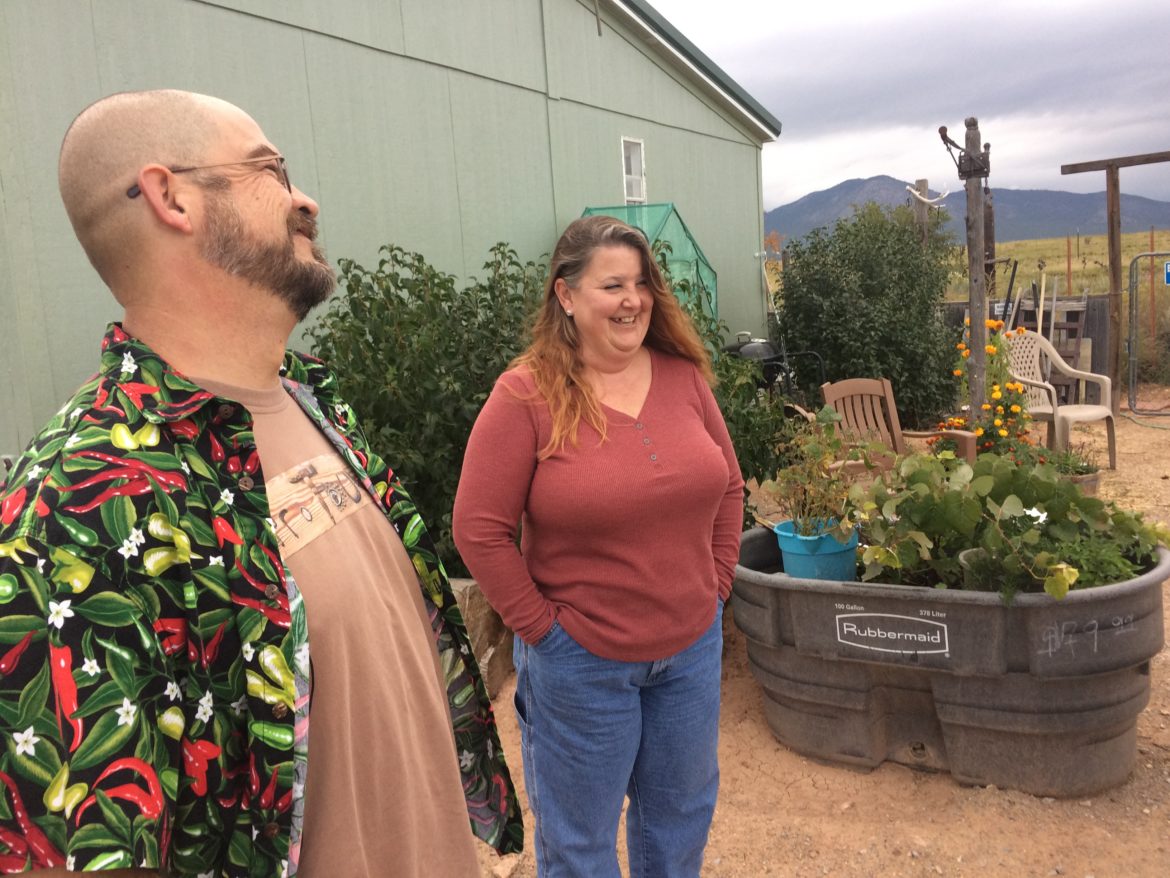 Knowing how precious their water is, Garrett Petrie and Teri Farley work hard to conserve water and still grow vegetables and fruit trees in their yard.

Garrett Petrie and Teri Farley moved to New Mexico about ten years ago. They found a house on five acres in the East Mountains because they liked being “off the grid.”

Moving from Tucson, they were both well-aware of the water issues in the region.

“We asked a lot of questions,” Petrie said. “We kept hearing things like, the wells really vary out here and you can get a good one, you can get a bad one.”

They thought they had a good well when they bought the house. But immediately after the couple moved in, neighbors revealed problems with the well they shared. They split the cost to replace a leaking storage tank. Then, within two years of that, Farley said the well went dry. Some days they’d turn on the tap and water would trickle out, other times the pipes would be dry and then after a while, the tank would re-fill.

Then, the well just quit producing. “We ran out of water,” Petrie said. “It just stopped.”

First, they paid to have water delivered. Petrie said 1,500 gallons cost about $85 and would last them about two weeks. That was just a short-term fix, however, and they knew they would have to hook into the local water utility, Entranosa Water & Wastewater Association.

That would solve the problem of their dry tap. But they had to build the infrastructure required to tie into the meter, which was more than 400 feet from their home. They’re still recovering from that financial commitment, Petrie said. “But you can’t live without water.”

Petrie reads the reports the water company regularly sends that show it has a projected sustainable supply of more than a century. But he wonders how realistic that is.

“There’s the pressure to grow and maintain a viable community,” he said. “How is that feasible? How are we going to sustain that?”

This isn’t just a problem for one home, or one well. Domestic wells are going dry across the Sandia Basin, a 400-square mile area across four counties, from Placitas to Tijeras and Sandia Crest to Edgewood. And a recent study by scientists at Stanford University and the University of California, Santa Barbara shows this isn’t unique to the East Mountains, or even New Mexico: groundwater levels are dropping at an alarming rate across the western United States.

Wells around the West drying

For their study, Debra Perrone and Scott Jasechko looked at the data for more than two million groundwater wells across 17 western states that were drilled from the 1950s until recently. As they write in their recent paper, published in the peer-reviewed journal, Environmental Research Letters, of those, one in 30 wells is likely dry now.

In addition to learning that one-in-30 wells no longer produce water, Perrone and Jasechko also found that agricultural wells are usually drilled to much deeper levels than domestic wells.

Jasechko said they noticed two “hotspots” for drying in New Mexico: The Estancia Basin in Torrance County, just south of Moriarity, “where a high proportion of wells have likely dried out,” and near Portales and Clovis.

In southeastern New Mexico, farms, cities and outlying households rely almost entirely on groundwater. And the Ogallala, part of the High Plains Aquifer system, has been dropping for more than five decades due to overpumping.

This summer, the New Mexico Bureau of Geology and Mineral Resources released a report about the High Plains Aquifer that analyzed thousands of water-level measurements made over the past 50 years. They came to an alarming conclusion: “the High Plains Aquifer is rapidly being dewatered and its usable life is short. This is particularly so for large-scale irrigated agriculture using high-capacity wells.”

Wells are drying up across the west, said Jasechko—making domestic water supplies vulnerable and possibly threatening farming in the western U.S. Drying will affect food production and American jobs, he said. It’s also a social justice issue: Not everyone can pay to dig a deeper well.

Perrone and Jasechko also found that well data varied from state to state. Some states track well data from the time a user applies for a permit to drill. Others, like Texas, rely on drillers to submit reports. In New Mexico, the data is tracked from its point of diversion, and “known incompletions” exist.

“In order to understand the vulnerability of drinking water supplies and irrigation water supplies, we really need excellent groundwater data,” Jasechko said. “One of the results of our study, is we learned there is more we can do in terms of collecting more water data. And the better data we have and the better information we have, the better able we are to manage these resources.”

Behind the fire station on Frost Road in the East Mountains, Bernalillo County monitors four wells drilled to different depths. This area is “ground zero” for the problems in the East Mountains, said Philip Rust, a hydrogeologist with the county’s Water Resources Program. Readings from these four wells and others help him understand what’s happening to the aquifer below.

But it’s tricky: “Every individual well is so different that you can’t speculate, unless you know that well or that area very, very well,” Rust said. “The geology out here is so complex you can’t generalize.” Just as the mountains themselves crinkle, curve and rise, so do the layers beneath the ground. “You don’t know what you’re going to encounter until you drill,” he said.

And the news isn’t good in the Sandia Basin.

Phillip Rust, a hydrogeologist with Bernalillo County, is monitoring groundwater wells in order to understand what’s happening to the aquifer.

“Since we’ve been collecting data, seven years now, aquifer levels have dropped about 1.8 feet per year on average in the East Mountain area,” Rust said.

That’s an annual average for the entire area, which means some people—like Petrie and Farley—have seen drastic drops near them, while other wells might not have declined yet.

But in general, Rust said, aquifer levels are going down in the East Mountains.

“A lot of these wells are 10, 20, 30, 40 years old,” he said. “So that’s a lot of drawdown in each individual well.” He explains that when people drill wells, they usually stop once they hit water. If you drilled your well 20 or 30 years ago, it might not be deep enough today to reach the aquifer anymore. “Unfortunately, for a lot of people, their wells are critically endangered of not being able to produce.”

Right now, the county has about 300 participants in the program, mostly in the East Mountains. And Rust is always looking for more people to join, whether their well is 40 years old or brand-new. To check a well’s depth, he uses a sonic device or a thick steel surveyor’s tape, usually twice a year, in the summer and late fall or early winter.

Pinpointing those individual depths and changes helps him understand the basin better—and it helps people who rely on domestic wells know what’s happening beneath their homes, too. “You can’t make good decisions if you don’t have good data,” he said.

What scientists like Rust do know is that people are pumping water from the aquifer faster than rain and snow can replenish it.

“If nothing else, it’s a lesson about good resource management,” Rust said. “Unfortunately, in the Sandia Basin, we have a limited resource and high demand. If we don’t manage it effectively, we face the reality of critical loss, not having enough.”

Living in a community of about 60 homes just off the road leading to the Sandia Peak, Krista Bonfantine thinks about her water supply on a daily basis. She’s part of a cooperative that relies on water from a small spring in the Sandias.

“I see mounting concern about water,” Bonfantine said. “There are so many people affected and so many people are seeing their friends and neighbors have to dig new wells, with huge price tags.” When she was buying a house about 15 years ago, she said she looked at some in Placitas. They were beautiful homes. But their wells were dry.

Cienega Spring is part of the “necklace of springs” at about the same elevation in the mountains. First, it fed an acequia for irrigation. Then, infrastructure was built around it to capture water and pipe it downstream to the community.

“The problem with a warming atmosphere is it’s a thirsty atmosphere,” said Krista Bonfantine

On a sunny September afternoon, Bonfantine opens the heavy door protecting the spring and peers into the water.  A close look into the shafts of sunlight piercing into the darkness reveal water percolating up from the limestone.

Bonfantine is worried about the spring. Like others in the Sandias, it’s fed by rain and snowmelt. “The problem with a warming atmosphere, is it’s a thirsty atmosphere,” she said. And there are increased human demands on the water, too. Currently, she and others in the East Mountains are fighting plans by a development company to drill for more water in the area.

Aquifer Science, a partnership between Campbell Ranch and Vidler Water Company, is seeking approval from the New Mexico Office of the State Engineer to drill for water in the Sandia Basin.

“I think that every community in New Mexico is concerned about their water,” Bonfantine said, no matter where they get their water or what their particular local issue might be. “As New Mexicans, one of our greatest resources are our natural resources, and water is necessary for all of our lives. We cannot in these times be in a position of having someone sell our water out from under us. We need to defend that.”

To watch last Friday’s episode of Our Land New Mexico that aired on New Mexico PBS about groundwater wells in the East Mountains, visit here. You can also learn more about the series at the New Mexico In Focus website.

Correction: This story originally said water was dropping in the East Mountain area at 1.2 feet per year. It is actually 1.8 feet per year. We regret the error.