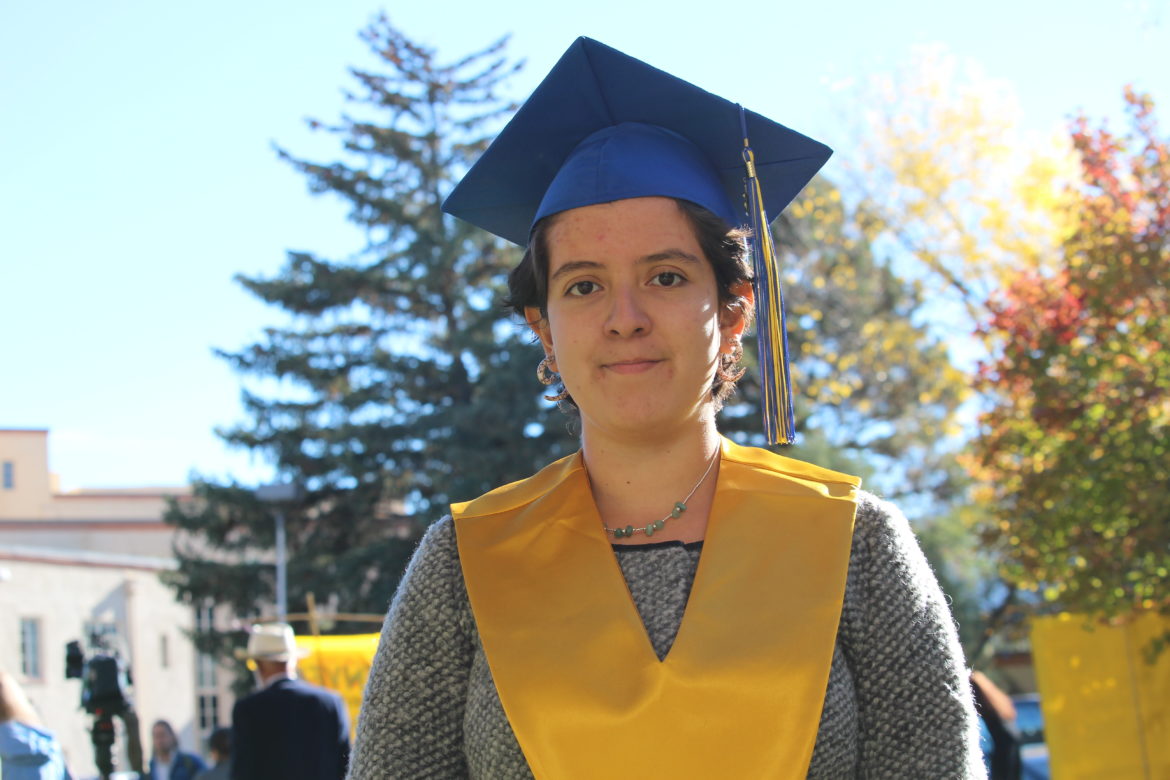 Ruby Lopez, 19, of Earth Care, a local environmental and social justice nonprofit, attended the protest and hearing. She's also a supplemental science teacher and said she doesn't want to see her students "left behind, or have less of a chance than students in other states."

Hundreds of New Mexicans waited in Santa Fe outside the Jerry Apodaca Building on Monday morning. They were there to share their thoughts about the statewide science standards proposed by the Public Education Department’s (PED) acting Secretary Christopher Ruszkowski.

Under the proposal, New Mexico would join about 20 other states around the country and implement Next Generation Science Standards (NGSS), which have been developed and recommended by scientists and educators. But New Mexico plans to adopt those standards with some key changes involving lessons on climate change, evolution and the Earth’s geological age.

People started arriving an hour-and-a-half before the start of the 9:00 a.m. hearing, and others didn’t leave until almost 2:00 p.m. Some New Mexicans stood in line for more than three hours, waiting for their names to be called so they could enter the building, stand before public officials in a small auditorium and speak for three minutes each.

But Ruszkowski did not attend the hearing, which frustrated many in the crowd as that news trickled out of the building to those waiting outside.

“I think that shows a lot of disdain for the public,” said Sen. Bill Soules, D-Las Cruces, who was in Santa Fe for an interim committee meeting. “It’s also very concerning to me that for a public hearing, the public isn’t able to participate.”

“The original standards are set up by science teachers, science professionals around the country and are broad enough to allow teachers to teach within those,” he said. “There was no reason to change them, for New Mexico to make it more agreeable to some industries, businesses or special interests.”

On Sunday, the Albuquerque Journal published an op-ed from the acting secretary who called for people to set aside politics and put “kids first.” He also wrote:

Today, however, some claim to be seeking truth and social justice yet have consistently disparaged all other forms of measurement, data, accountability, evaluation and evidence on how to improve student outcomes, especially for our kids from low-income communities. For those taking that position or offering only misleading sound bites instead of taking constructive steps like scheduling a meeting or engaging in productive dialogue, let us not miss an opportunity to pull together and demonstrate a greater commitment to student success than public posturing.

Like others who spoke in Santa Fe on Monday, Soules questioned the decision-making process behind Ruszkowski’s move on the science standards.

“This administration had indicated they were going to be very transparent, and the secretary essentially said, ‘I’m not going to tell you where they came from.’ That’s not being transparent,” Soules said. “We ought to know who actually wrote these, who fully approved these and what the process was.”

Peter St. Cyr, executive director of the New Mexico Foundation for Open Government, said the state’s Open Meetings Act is clear. “All public bodies, other than the courts and the legislature, are required to allow any person who desires to attend and listen to the hearing access,” he said.

“The Public Education Department should have anticipated an overflow crowd and made arrangements for a video and audio screen outside, or better yet moved the hearing to a larger venue,” St. Cyr said. “Once the room filled to capacity, they should have stopped the meeting and determined if they could set up the video and audio outside right away to provide that access. If they were unprepared to make the accommodation today, they should have cancelled it and started the process over.”

He said the failure to do so meant the hearing violated the Open Meetings Act.

“If a complaint is filed the best option for PED is to simply start the process over and commit to following the law that gives every New Mexican a right to know what the government is doing,” he said, adding that transparency around decision-making processes helps “identify waste, fraud and abuse.”

The crowd waiting outside to speak included about 40 students from Cottonwood Classical Preparatory School, a charter school in Albuquerque. High school senior Will Binette helped organize the students into traveling to Santa Fe for the hearing.

For Binette, the issue comes down to a separation of church and state.

“It seems like they’re trying to switch the science standards from scientifically-proven facts to intelligent design,” he said. “Evolution is a proven theory, and I can’t believe we’re still having this fight in education.”

The key changes New Mexico’s education secretary calls for in adopting and altering the Next Generation Science Standards include changing lessons on climate change to instead focus on “climate fluctuation.”  Lessons on natural selection and evolution would include alternative views. And the proposed standards remove references to the scientifically-accepted age of the Earth of 4.6 billion years.

Will Binette, a senior at Cottonwood Classical Preparatory School, helped organize students to attend the hearing

“I don’t understand why there’s a conflict here,” Binette said. “New Mexico students are already at a disadvantage, and this does nothing to help our education system. It only harms it.”

Binette added that today’s decision-makers aren’t the ones who will be most affected by the curriculum changes—nor the greatest impacts of climate change. As a senior with his sights set on out-of-state universities to study astrophysics, the curriculum changes won’t affect Binette either. But he wanted to show up and push back against the standards for his younger schoolmates.

The proposed standards, with their nod to Christian beliefs rather than scientifically-proven and replicated facts, he said, haven’t been peer-reviewed or tested.

“The idea that someone would be proposing this in this day and age should not be surprising, given the reactionary things happening in this country,” he said. “But it’s ridiculous.”

Packard was flanked by women with the Interfaith Coalition for Public Education.

Lynn Heffron is with the coalition, and she’s also the president of the American Association of University Women – Santa Fe.

“Interfaith Coalition represents all faiths,” she said. “And speaking on behalf of the coalition: please keep principles of evolution in the curriculum.”

Heffron said she’s worried about the state’s students. “These changes will have a devastating, profound impact on impoverished kids and kids in rural New Mexico,” she said. “Kids who don’t have a mother or a father at (Los Alamos National Laboratory) teaching them in the evening.”

Heffron works to line up tutors for students in Santa Fe; often those are retired physicists or math professors. “Am I supposed to now ask tutors to bring up these subjects?”

Nyika Allen, president and CEO of the New Mexico Technology Council also waited in line to speak in support of adopting the NGSS in their unaltered form.

“There are 1,500 open tech jobs in New Mexico,” said Allen, whose group represents about 150 companies in the state.

Tech jobs are difficult to fill, either because New Mexico students don’t have the skills and knowledge, she said, or because people don’t want to move to the state, knowing that the public schools aren’t excelling.

“We believe that science education is central to the lives of all Americans,” Allen wrote in the letter she also planned to submit to PED officials. “Thus, we ask that PED drop the proposed revisions and adopt the full NGSS as is, in accord with the 2013 recommendation of the Math and Science Advisory Council.”

Earlier this year, Gov. Susana Martinez vetoed a bill that would have required the state’s teachers to follow the Next Generation Science Standards.

In her veto message, the governor said the changes should be left up to PED and don’t belong in state statute. She wrote that PED “has already been working diligently to route the standards through the appropriate vetting process” and already recommends the review and adoption of all academic standards every six years.

McCamley attended the hearing in Santa Fe, as chair of the House Labor and Economic Development Committee.

“My job is to help create an environment where jobs can flourish in the state,” McCamley said. “I’m not sure the secretary knows this, since he just came here about six months ago—It would be great to talk to him. Unfortunately, he decided not to show up today—and I’d love to tell him about our high unemployment, our low wages, about the fact that we are rock bottom in childhood poverty.”

With three research universities and two national laboratories, New Mexico could be doing a better job of creating companies and jobs from that research, McCamley said.

What Ruszkowski proposed will “hamstring” efforts to do that, McCamley said. Weakened science standards, he said, won’t help New Mexico build a more educated workforce—and they send the message to investors and entrepreneurs that the state doesn’t think fighting climate change is important.

McCamley also thinks the state’s anti-science attitude will affect the ability of universities to hire the best and brightest faculty members.

“Imagine UNM, New Mexico Tech, or NMSU going to hire a new biology professor or chemistry professor,” he said. “This is a slap in the face to their profession, and they’re going to be a heck of a lot less likely to come here.”

Outside the hearing, NM Political Report looked for proponents of the altered standards to interview—but found none in line or in front of the PED building. An hour and a half into the hearing, when the building was cleared for the fire alarm and we spoke with McCamley, no proponents had testified, either.

“So far, not one single person has backed his proposed changes, or the governor’s proposed changes. I think that absence itself speaks volumes,” McCamley said. “If you can’t stand the heat get out of the kitchen. And if this is too hot for him, maybe the changes aren’t very good and they should adopt the full NGSS standards.”

About 40 students from Cottonwood Classical Preparatory School came for the hearing. Dante Manocchio (right), a junior, said students need support today more than ever. “Our climate is changing. That’s undeniable,” he said. “And we need all the support we can get to fix this problem. It’s unprecedented.”

Sanders Moore, state director of Environment New Mexico, said she was energized by the turnout in support of fact-based science standards. “People came from all over New Mexico to fight for the future of our education system,” she said.

Monday’s hearing was packed to beyond capacity. People who signed in were allowed into the building only once it was their turn to speak. Some waited three hours for a chance to give their three minute public comment.